When little girls and boys dream about a life as a dancer they think about the costumes and the lights, the thrill and the applause, the joy of movement, the storytelling, the fantasy. These are the parts of the career that the audience sees, and they are the perks. These are the things that dancers love about the job. What children don’t imagine are the pressures of a career on stage. I don’t present this as a deterrent, as it is often said that the greatest struggles offer the greatest rewards. I present it as something that is rarely discussed outside a sensationalistic framework, such as a movie like Black Swan. I present it as challenges that dancers face with effects that can be mitigated, thus allowing for the full enjoyment of the moments one dreams about as a child.

For years, I imagined that my favourite dancers were the epitome of confidence, that they never for a second doubted themselves.  It wasn’t until a few years into my professional career that I realized that those dancers that I admired did a lot of work to prepare mentally for the stage and even for rehearsal, and that the aura of confidence was a skill, not something innate or taken for granted.

This fall I have experienced two distinct, yet very common, psychological challenges that dancers face on a fairly regular basis, and would like to share my stories in the hopes that a dancer somewhere may benefit from my experiences.

The biggest pressures I have felt in my career have generally coincided with my biggest opportunities. Recently I made my debut in New York City. There was no easing into this experience. I went from having never performed in New York to dancing the title role in Alice’s Adventures in Wonderland on opening night at the Lincoln Center. Logically, I could tell myself that I had danced big roles on opening night before, that I had danced this particular role many times, that Toronto audiences are equally discerning as those in New York. Logically. However, I had a voice in my head (I call it a Gremlin) telling me “It’s New York City! Are you good enough?” And so, I had some work to do to silence the Gremlin. This work began in the earliest rehearsals and continued throughout the run of performances. What worked for me was replacing negative thoughts with positive ones both in rehearsal and outside the studio too. Rather than trying not to think of my nerves. which would make me notice them even more (try right now not to think of Smarties), I replaced that negative focus with the goals I was hoping to achieve. I focused on my intentions, both technically and artistically, in the role. I focused on what I was aiming for, not what I was hoping to avoid. I focused on wanting to feel emotionally secure and confident once I was onstage.

It was crucial for me to begin this mental preparation early in the rehearsal process.  If I had waited until close to the performances it would have been too late. That’s because at first I felt ridiculous. Practising confidence and assurance when I felt anything but confident and assured felt absolutely dumb. However, with persistence, the Gremlin grew quieter and the voice in my head that I was trying to replace him with got louder. I suppose it is a little like smiling even if you don’t feel like it. Eventually, there are signals sent to your brain that actually cheer you up. Was I nervous before the curtain went up? Of course! But I had practised the mental skills I needed to present myself to the best of my ability. I could have been crippled by fear, but instead I could enjoy every second of this dream come true in a role that I love. I could revel in the perks and gifts of the performance. And when the company received a standing ovation, I was present in the moment and could soak it all in.

Upon returning to Toronto I faced another common and, for me, even greater challenge. That of getting to the point where I even need to worry about stage fright. By this I mean making it through an audition process. During the final performance in New York I learned that I was up for the role of Manon, one that I have always dreamed of dancing. While I don’t have to work freelance and generally my casting is determined by my director and coaches at The National Ballet, I still often have to try out for a part when a choreographer or a person who owns the rights to a ballet arrives in town to cast a ballet. This was the case for Manon. In these situations I get terribly nervous. When auditioning, I have to quickly learn new choreography and, with no time to master it, present it to the person who will determine my eligibility for a role. While I learn the steps quickly, I tend to be more of a tortoise than a hare artistically and in picking up unique movement styles. I suppose it is the dance equivalent of not interviewing well. In time, I can find the essence of a role and I think bring something unique and special to the table, but those who don’t know me don’t know that my starting point is not even close to where I arrive.

I’m still working on overcoming the challenges that I face in these circumstances. Knowing that it takes me longer, I panic that I may be cut before I can present myself well. I get wrapped up in my head and struggle to be more present and genuine artistically. I worry about others advancing more quickly and what that means for my chances. I often imagine that any change in the facial expression of the person at the front of the studio must mean something negative. It really comes back to Gremlins again. To combat these Gremlins, I try to employ the same technique of being goal-oriented rather than dwelling on the negative. I have also found that breathing exercises can help take me out of my head and back into my body. I have read about mindfulness and experiment with some of the concepts in my own way. I try to focus on trusting myself and not looking to outside approval. That last idea is the most difficult when I am trying to impress someone, but if I can find that trust in myself it results in better dancing. It results in more confident movement and more style. In this, even after fourteen years as a professional, I am a work-in-progress, but I am getting better.

During the process of auditioning for Manon some days were definitely better than others and I experienced many ups and downs (like I say, I am still a work-in-progress), but I am thrilled to say that I got the part. This ballet is a dream come true for me and I am so excited to now be focusing on my goals for my upcoming performances. I am also thrilled to be dancing with Harrison James, a new dancer to the company and new (and, I hope, long-term) friend. Not only is he a wonderful partner, but his kindness and sense of humour helped me through many a stressful moment. I am beyond excited to get out there and enjoy the moment with him.

This article is a reproduced here with the permission of the author. The article is unedited. 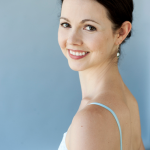 By Jillian Vanstone
Read more by this author