It was ten years ago, on December 4th 2002 that Jean-Pierre Perreault passed away. The man, our friend and the artist left us all too soon. However, through evenings such as this one organized by Coleman Lemieux & Compagnie, we see that his work lives on and continues to make a valuable contribution to the Canadian artistic landscape.

Jean-Pierre’s choreographic vision touched many; it helped shape dance in Quebec, Canada and beyond. It had a resounding impact on a whole generation of artists who came into contact with his work. In Jean-Pierre’s world weakness can be a source of strength, darkness as a canvas for light and even costumes clothing the body so as to let fleeting glimpses of skin catch light and breathe the air. We see feet running toward or away an inevitable human condition. We see hands, faces, arms, calling out the need to touch or be touched, to search for the other, to find the strength of the embrace and inhabit the duality of solitude in a society of many.

Let this evening celebrate his work, but even more so, the creative act, as he envisioned it, as Tim has captured it, as Laurence and Mark still carry within their bodies; not only as dancers but rather as people who inhabit a world, and perhaps even a better world, if only because his work has allowed us to see beneath the surface. 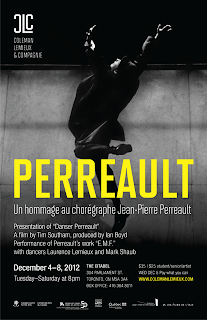 The Perreault tribute runs through December 8th at The Citadel in Toronto and includes the presentation of Danser Perreault a film by Tim Southam, followed by a performance of one of Perreault’s works, E.M.F. with dancers Laurence Lemieux and Mark Shaub. 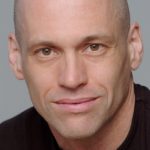 By Marc Boivin
Read more by this author