This year, Regina was already cold in the last few weeks of September. Even though the temperature still hovered above the freezing point, conversations about an impending harsh winter on the Prairies were already on the lips of a few guests at Bad (Ass) Bodies, this year’s Queer City Cinema, Regina’s queer video and performance art festival. With the first edition launched in 1996, the festival has evolved from a biennial film and video festival to an annual event focusing on creations of local, national and international queer artists.

As a theme, “bad (ass) bodies” celebrates bodies — marginalized, taboo, differently abled bodies — that have historically been trivialized, oppressed and discarded. In acknowledging the historical stigmas against bodies within and beyond queer history, the festival challenged guests to confront their bodily limitations and abilities and to become more sympathetic towards bodies different from their own.

In order to achieve such a curatorial vision, the festival needed a strategy of impact, an immersiveness capable of provoking a sensory shift within the guests — one that allowed for reflection about our bodies and those around us. Needless to say, the vision seemed generically ambitious at the outset until jes sachse, a Toronto-based performance artist, took the audience on an hour-long journey in which sachse continuously travelled up and down two escalators located inside the Central branch of Regina Public Library (RPL). The performance, After Hours, was sachse’s latest continuation of their investigation on the negotiations of bodies moving in public/private spaces and the practice of care. How one cares for their own body and who is afforded the privilege to engage their body are the inquiries repeated with each iteration of sachse’s walk between the escalators.

Under the roof of the library, sachse’s questions were nuanced by this highly regulated architectural space: equipped with sound mufflers, fluorescent lights and surveillance points, libraries are typically built to deter disturbance and promote solitary contemplation. Consequently, bodies inside libraries are also highly regulated with expectations from the heights of tables to the humidity level and the balance between natural and artificial light. At the Regina Public Library, escalators are installed at two opposing sides of the atrium to delegate ascending and descending flows of traffic. The artist positioned the library itself as the societal attitude that their performance wanted to challenge.

It is important to also acknowledge that sachse has a differently abled body, and the difference is visually noticeable. With each trip up and down the escalators, the artist entertains, interacts and challenges the audience’s expectation of how the artist’s body, which appears again and again, should perform on a dangerous platform such as the escalators. sachse tap dances, assumes ballet positions, plays with plastic tokens sitting on escalator steps and carries a walker comically up and down the escalators to a playlist of self-empowering, feel-good songs. In one particular act, sachse rides the escalator down to Fifth Harmony’s Work from Home before walking the runway in their denim jacket and safety gloves towards the ascending escalator.

The artist playfully and daringly puts their body against the emotionless mechanics of the escalators while the audience members, many of whom have able bodies, watch on. Every time sachse steps on the escalators, they force us to confront our trust, or lack thereof, in their ability to maintain their own safety. It’s not that we don’t trust them, but rather we’re worried for them, a worry that sachse gradually proves unwarranted as the performance carries on.

sachse’s intention becomes clear in an off-escalator act. After carrying the walker down the escalator, they walk with it and stop by a magazine bookshelf. They hoist themselves up and sit on the walker while picking out an issue of Men’s Health, flipping through it while holding it upside down. If a latecomer happened to walk in during the beginning of this act, sachse’s little witty and comedic, subversive performance here would have dispelled any presumption that they might need assistance to walk.

After watching sachse perform, I was hesitant whether or not to call their body “badass.” Their performance resisted that celebratory, somewhat tokenistic, condescension to a disabled body, which often risks infantizing marginalized bodies and denying them their own agency. What sachse’s performance made clear, however, was that our urban infrastructure isn’t equitable. By asserting design-centric measures, many modern buildings, such as the RPL, absorb well bodies who conform to the design paradigm while outing those it fails to serve. Maybe what sachse wanted to show us, the normatively abled ones, is that their body isn’t badass; it’s the society, embodied in the library, that is bad. 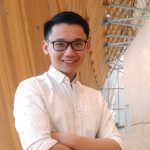 By Tak Pham
Read more by this author