The concept behind Marie-Josée Chartier’s petites danses is a simple one: how does choreography change the way we hear music? In her opening remarks, she claimed that the music would sound different to the audience with each dance. I was intrigued but skeptical: after repeatedly seeing other shows in my life — albeit, usually commercial works — and hearing the same music but with new staging and choreography, I still heard the same music. Would this be different?

The show featured three pieces of music: After Truth, composed by Rodney Sharman, with Rick Sacks on percussion and Elissa Poole on baroque flute; Senesce by Nick Storring, with the Madawaska String Quartet; and Septet by James Tenney, with Adrian Verdejo on guitars and bass.

Toronto dancer Kassi Scott opened the show with a solo to Senesce, which began with a long period of spinning. I was preoccupied with how Scott kept turning without spotting when a young child sitting a few spots down from me said, “That’s creepy.” Indeed, the eerie music did leave that feeling.

As the dance continued, the choreography reminded me of a child playing, maybe even discovering all the wonderful ways her body can move: Scott would lift her skirt slightly and laugh at her feet, or she’d leap back and forth. When I listen to that music now, two days later, on SoundCloud, I don’t hear happy, yet I felt happy by the end of the dance.

The quartet, danced by Mairéad Filgate, Lucy Rupert, Brodie Stevenson and Kate Story to Sharman’s After Truth, was like a freakish romp through one’s mind. The lack of unison in the choreography reminded me of all the voices we have in our heads: tearing into each other one moment and then supporting each other the next. The music didn’t seem to have a clear beat, and yet there was a clear rhythm to which the dancers were moving.

The duet, danced to Tenney’s Septet, was perhaps one of the two most powerful pieces of the night. The subtlety of a naked woman (Kaitlin Standeven) dancing with a man wearing pants (Brodie Stevenson) could have been a stereotypical gender statement, but it was more than that. Tenney’s composition sounded cautious, careful, and Standeven’s struggle with her boundaries — when and how could Stevenson touch her? — reflected it beautifully.

On this evening in Kitchener, petites danses was six out of the eight dances that make up the full program. The idea of shorter works is something Chartier has been working on for many years and in 2014 a works-in-progress of dances and films was shared at Soulpepper in Toronto.

After the intermission, the three songs we’d just heard were played in a different sequence, with different choreography.

Sharman’s After Truth opened the second act, this time as a septet. Instead of the frenetic choreography of the first version, seven forms, lined up one next to the other, were draped in long, monochromatic, anonymizing cloths. Then, on top of the entire row was one large, stifling sheet of plastic. This dance had very little movement, a complete opposite to its act one version. By the end of the music, the forms were revealed: seven men, with an age span of about forty years, who could now finally breathe. A song that at first seemed so agitated and distressed now sounded haunting and suffocating, as though life were slowly suppressing these men. It was just as powerful as the Septet duet in the first act.

Next, a trio danced to Septet by Tenney. This dance seemed to be about power, as a woman was choosing between a younger and older man. I didn’t hear as much difference in this music, though, as I did in the other two. Perhaps the concepts were too similar, or the pace of choreography was; I’m not entirely sure.

The final dance, the octet, was danced to the composition that opened the show, Storring’s Senesce. Whereas Scott’s solo in the first act conveyed a childlike experiment to life, this octet conveyed a heavier adult approach: moving in conflict between being ourselves and conforming as we walk through the maze of life.

I’d say Chartier’s experiment worked. Of course I could hear that the songs were the same. I could even picture some of the choreography from the first act during the second act. It certainly helped that the music was new to me, so I had no preconceived notions of it in my mind before seeing the show. But the change in movement did, indeed, emphasize other tones and rhythms in the compositions, leaving me with the impression of having heard different music. 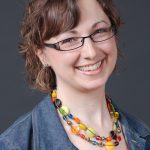