“Bite the sandwich,” said Anna Wyman, perched on a director’s chair while taking full command of her studio, Anna Wyman School of Dance Arts in West Vancouver. She was not referring to actually eating a sandwich; she was encouraging us to enjoy the act of dancing and be in the moment. At least, that is how I interpreted her words, and they are still with me some twenty-five years later, even in my life as an author and an illustrator.

When I draw, I careen across the page with a pen — no pencil and eraser — confident in the technique I have honed over many years. Similarly, when dancing in Wyman’s senior performing group, we found that our ballet and contemporary training allowed us to readily learn her choreography, which was physical, structured, humorous and playful all at once.

We also watched videos of her choreography for her professional modern dance company, Anna Wyman Dance Theatre, and when we performed, we sometimes wore the costumes those dancers had worn in the 1970s and 1980s, wowing audiences in Europe, China and the United States. The company retired in 1990, and her husband and company dancer of fifteen years, Neil Wortley, became the stage manager and the co-director of the school. Wortley died in 2017.

I still have a photo of a performance at the West Vancouver Recreation Centre (now the West Vancouver Community Centre) from 1998, and I learned that the Dutch artist Frits Jacobsen painted the bold green strokes on the yellow costumes we wore. Known for his drawings of Vancouver buildings, Jacobsen was introduced to Wyman in the 1970s by Yvonne Van Heddegem, Wyman’s head costume designer. Van Heddegem remembers how Wyman would phone her in the middle of the night with a pressing creative question.

“Do you think we can make a revolving circular stage?” Wyman once asked during these midnight calls.

“Yes, Anna,” said Van Heddegem. She says she would always reply this way, even if her wheelhouse was costumes, not sets.

The stage was constructed to Wyman’s specifications and toured across Canada. This sense of collaboration and creativity is what made Wyman so unique. I remember she would gather us around her chair to have a “chatty-poo,” her term for conversations that encompassed art, philosophy and sometimes discipline.

“Do you know who Bill Reid is?” I remember her sternly asking. When we answered no, her face clouded over and she told us he had just died. She shared the legacy he left behind as an Indigenous carver, and that he was a friend. These lessons showed us a world that extended far beyond the Marine Drive studio we rehearsed in for hours as young North Shore teens. Wyman’s world extended beyond that studio too.

At Simon Fraser University (SFU), Wyman kick-started the many friendships and intellectual ideas that allowed her to flourish. Her former husband, Max Wyman, says via email: “Very soon after we arrived in Canada in 1967, Anna was inundated with teaching engagements, most importantly at Simon Fraser University’s Centre for Communications and the Arts, which was a hotbed of experimentalism and creative anarchy, and at the University of BC. This brought her into contact with many of the emerging creative spirits of the day — visual artists, composers, designers, sculptors, contacts that only increased as her performing troupe became established in the city through its noontime engagements at the Vancouver Art Gallery.”

In the end, I did not pursue dance professionally, but Wyman surely influenced my next steps. I studied visual art and then architecture; we had in fact performed a piece of hers that was called Architecture. The piece helped me see architecture as a form of choreography.

I learned in recent years that Wyman was a friend of Arthur Erickson, an architect with global stature. The Vancouver architect Simon Scott worked with Erickson for many years and recalls a memorable picnic with Wyman, Erickson and some dancers on the grounds of the recently constructed SFU. Erickson had envisioned the building set in a field of poppies, but the school rejected this idea. The picnic became an act of guerilla gardening, with Wyman and others scattering poppy seeds. The spontaneity and poetry of this gesture, not to mention the determination, is how I remember Wyman as a dance teacher and a mentor. 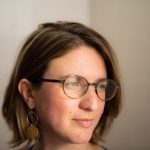 By Emma FitzGerald
Read more by this author