Death is eternal, but so is the art that captures it. The National Ballet of Canada offers a glimpse of both ballet’s past and promising future in the company premiere of George Balanchine’s Chaconne, paired with the world premiere of Robert Binet’s Orpheus Alive — a mixed program that opened at the Four Seasons Centre on November 15.

Chaconne was first performed in the 1963 Hamburg State Opera’s production of Orfeo ed Eurydice, with music composed by Christoph Willibald Gluck. The work, which makes up the first half of the program, takes a heavenly, lighthearted approach to the tragic love story. By contrast, after intermission Binet plunges us into the underworld with his dark approach to the same myth, punctuated by disquieting new music by composer Missy Mazzoli and further enhanced by the work of set designer Hyemi Shin and lighting by Tom Visser.

The Orpheus myth follows a man blessed with supernatural musical ability. He marries a maiden, Eurydice, who dies from a snakebite. Unable to accept his lover’s death, Orpheus attempts to retrieve her from the underworld, using his music to persuade the gods. Hades, the king of the underworld, agrees to give Eurydice back under one condition: Orpheus is not to look at her until he has freed her from the underworld. But right before Eurydice exits the gates of Hades, Orpheus looks back, and his lover is torn from him forever.

Chaconne is the Orpheus myth with the pain removed: instead of following his love into the underworld, principal dancer Harrison James ventures into the Elysian Fields, the equivalent to heaven in Greek mythology. Adding to the lighthearted aura, the production opens with a chorus of nymph-like dancers — hair loose, feet bare, moving with musical precision across the otherwise bare stage. It’s easy to imagine heaven. The first pas de deux, performed by Heather Ogden and James, reflects two lovers in harmony, each careful step taken together, as if by one body, arms extending into clean parallel lines. Balanchine created a world so seemingly pristine it could only exist in the heavens, or on a ballet stage. It’s hard to resist the kind of escapism this performance promises — peace and perfection in a flawed and uncertain world.

Orpheus Alive offers the opposite sensation. Binet reimagines the tale in a modern retelling set in present-day Toronto with a gender-swapped principal couple. When the curtain rises, the stage has transformed from the utopian afterlife created by Balanchine into an unsettlingly familiar scene — an overcrowded waiting room. Instead of orderliness, it’s an atmosphere of chaos, as mourners wait in bureaucratic limbo to save their loved ones from death. In this tale, Orpheus (Jenna Savella) is not an exceptional hero but instead one of hundreds of mourners seeking reunion with their lost loved ones. Here, Orpheus and Eurydice (Spencer Hack) are separated not by chance, as in the original myth, but by choice.

The moment the Four Seasons Centre’s neighbouring TTC subway station, Osgoode, is reproduced onstage there’s an uncanny tension in the air. The orchestra swells with the ambient sounds of a distantly approaching train. As the principal dancers begin their pas de deux, their connection slowly unravels. The station is flooded with furies — harbingers of death — slowly seducing Eurydice away from his lover’s arms. Moving with decisive strides and broad, sharp extensions they boldly advance forward where Orpheus hesitates. At first, Orpheus puts up a strong fight, clinging to Eurydice’s outstretched arms, begging him not to succumb to the call of death. But the furies become Eurydice’s new dance partners, transforming the train tracks they dance upon into a ladder to the underworld. Orpheus is left alone, her grief spurred not only by loss but also by her lover’s apparent choice to leave her by taking his life. This is not Chaconne’s principal couple moving expertly as one. This is complicated love, infested with unresolved pain.

In the dance of the apparitions, we’re reminded that this is not an uncommon story. Pairs of dancers, depicting all sorts of relationships (not just hetero ones) are dressed in variations of Orpheus’s yellow skirt, and Eurydice’s blue collared shirt, dance their own duets. In different states of disarray, variations of Orpheus grip their lovers’ hands and, while blindfolded, attempt to lead Eurydice. Each time the blindfold is removed, another Orpheus must confront the fact that his or her lover is dead.

By pairing these contrasting interpretations in one night, the programming conveys how ballet can transform grief. It can create a beautiful reprieve (as in Chaconne) or illuminate a dark reality of the human experience. As none of us are immune from death, there’s a beauty in seeing how the pain of loss will continue to drive artistic discovery and move us to venture on. 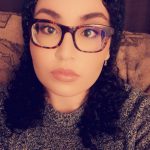 By Rebecca Flemister
Read more by this author