In partnership with The National Ballet of Canada, through the Emerging Dance Critics Programme, we are providing one-on-one editorial mentorship and publishing exposure to a selected group of emerging dance writers who have demonstrated an investment in the field. Over the course of June 2014, this group of writers will produce reviews about the summer season, which will be edited according to our standards and posted in this dedicated column.

During its six-show run, the National Ballet of Canada’s Physical Thinking mixed program challenged corps de ballet and principal dancers to move —  exploring the contemporary and avant-garde possibilities of ballet.

The opening piece, Le Spectre de la Rose was revived and adapted by German dancer and choreographer Marco Goecke. The piece, originally created by Michel Fokine for Sergei Diaghilev’s Ballets Russes for Vaslav Nijinsky and Tamara Karsavina, debuted in 1911 and has been interpreted by many through the years, from Sadler’s Wells to American Ballet Theatre to the 1979 Maurice Béjart version. The piece is loosely narrative: a young girl dreaming of a rose that she received as a gift at a ball earlier that night. Blanketed with blush petals and shadows created by the dramatic and stark lighting, the piece does not lend itself to conventional expressions of emotion. Instead, the choreography does the heavy lifting and expressivity is carried through movement itself. This abstraction is evident from the beginning, as the piece opens without musical accompaniment. We hear sounds that range from a pitter-patter of individual footsteps to the thundering of the whole troupe. Kathryn Hosier played the dreamer on opening night. Her lithe body bowed into and out of the shadows and they in turn played over her disconnected movements and partnering with Guillaume Côté as the rose.

The second piece, Opus 19/The Dreamer, tells a story of love and influence with a subtle darkness in a vibrant ethereal world choreographed by the late Jerome Robbins. Alexander Da Costa’s trembling violin solo from Violin Concerto No. 1 in D Major by Sergei Prokofiev was accompanied by a fluid opening night performance from Naoya Ebe and his partner Sonia Rodriguez whose graceful movements always captivate. Passionate lifts and arabesques unfold on the simple dusk-blue scrim that is complemented by the flowing skirts of the corps who hold court behind the fated lovers.

The last piece, the second detail by William Forsythe, was my personal favourite. The American choreographer is acclaimed for his unique style of choreography usually performed by his namesake company. The set is simple, beginning with a row of white chairs lining the back of the stage in front of a grey scrim. Dancers strut nonchalantly between transitions with deadpan expressions before launching into enraptured wave-like canons of dance or simply taking a seat. The varied movements of dancers, and the varied formations, between the isolated solo and the ensemble groupings dancing in unison caused an overload of the senses. The motley performance ended with a rebellious solo; a climax of Forsythe’s revered choreography.

Reading Writing Dancing is one of The Dance Current’s educational programs, providing workshops, seminars, mentorship and professional development to emerging and established dance writers alike. As part of our commitment to the field, we partner with like-minded organizations to educate dance readers and dance writers, providing public access to dance art and culture, and facilitating dance literacy and appreciation. 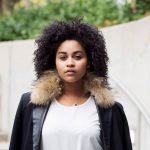 By Elaisha Green
Read more by this author