He’s a quiet choreographer and a former zen monk. He’s a physical poet and a spiritual guide to dancers’ creative souls. He’s also a very successful and unassuming man who has been developing one of the most unique facilities for dance artists in this country. It’s called La B.A.R.N.

The facility (an acronym for “beauty, art, retreat, nature”) is located in Pontiac County, Quebec, about ninety minutes northeast of Ottawa, where dusty roads and forest animals are part of his everyday existence. “I chose to move to the Pontiac because of my roots there,” Robinson tells me over dinner. “My family had a cottage on Lac Sinclair, forty kilometres directly east of where I am now. I spent my childhood in that landscape. The dried pine needles are engraved on the soles of my feet.”

Robinson’s professional resumé reads like the dream page from the dance artist’s handbook. He is the artistic director of 10 Gates Dancing, his own education- and performance-based company. He won the Chalmers National Dance Award in 1998 for his solo Rokudo. Formerly a resident choreographer and artistic director at Winnipeg’s Contemporary Dancers, he has also created works for EDAM, Les Ballets Jazz de Montréal, Main Dance, the School of Toronto Dance Theatre and Canadian Children’s Dance Theatre. He’s a well recognized educator/mentor here and abroad and worked frequently as a monitor at Le Groupe Dance Lab. He’s an associate dance artist at the National Arts Centre and has collaborated with many of the best in Canadian dance: Margie Gillis, Louise Lecavalier and Peggy Baker, to name a few. So why would he put the brakes on a successful career to develop a retreat centre, where his daily concerns consist of holes in a barn roof, bats in the eaves, hornets nests and septic tanks?

“Some people say I am naïve,” Robinson points out, “but I see myself as an idealist. I believe in the philosophy of dreams and good intentions. I believe in the power of intimate creative experiences and La B.A.R.N. is the embodiment of that.” Currently, La B.A.R.N. is a seasonal retreat that offers summer residency programs to dancers and choreographers. They get to partake in a cherished opportunity to leave the hustle and bustle of daily living for the inspirational calm of creating amidst nature under Robinson’s guidance. Dancers, choreographers, mentors work all day, then talk dance and philosophy and life well into the evening. There is nothing more than the wind on the lake and towering trees to distract them from all forms of discourse. “It gives me pleasure to support artists who give back with equal generosity,” says Robinson. “Whether through their dance work or by digging in the garden. It’s all about creating community.” The actual studio is located in an original outbuilding on the property. Robinson tells me with pride: “I built the dance floor all by myself and it’s still level!” He describes how the space is converted for performance. “We rely on natural light and some basic work lights. there’s a good sound system and my mother’s piano that I haul down from the house when required. We throw open the back doors onto a raised platform nestled among the trees. It seats about forty-five audience members. It’s site specific. It’s intimate.”

Robinson’s dreams are big. He wants to open the facility all year round. “If I could afford to build an all season facility, I would do it in a heartbeat. The winter is the most beautiful time of year in the Pontiac, perfect for inspiring the imagination. The major stumbling block is financial. There is no public money in the property or the buildings, they are upgraded and maintained out of my own pocket. The public money is only for funding the programs offered at La B.A.R.N.” Robinson shakes his head thinking about the financial burden then smiles. “I am grateful to my parents who left me a small inheritance which allowed me to purchase the property, to maintain it, improve it. My dad would be proud.”

When asked if he is building Canada’s very own Jacob’s Pillow, he laughs. “Well Jacob’s Pillow was started by Ted Shawn and I’m also a Tedd. And both places began as summer retreats for study and exploration in dance. People have already compared it to Jacob’s Pillow of the early ’30s. But my vision is different, because I want to keep La B.A.R.N. intimate and small, which Jacob’s Pillow no longer is.”

Taking this artistic path is perhaps unexpected because, on paper, his career trajectory as a choreographer and mentor for hire had been right on course. After a much ballyhooed stint as artistic director of Winnipeg’s Contemporary Dancers, Robinson left it all behind to return to Ottawa in 1990 to build his solo career, developing a close working relationship with (the now defunct and enormously respected) Le Groupe Dance Lab under the tutelage of Peter Boneham who told him: “Your theatricality is innate; your dance vocabulary really sucks.” Robinson chuckles at the memory.

“I had spent several years in Winnipeg creating large ensemble dances that were highly theatrical crowd pleasers, working with large budgets and directing a comparatively large company. I knew it was time to go back to basics and investigate what I really wanted to say as an artist.” It was a leap of faith on his part, one applauded by his dance collegues for its courage and integrity.

Robinson’s time at Le Groupe during the nineties was a good fit. He began to explore his authentic artist’s voice with intensity. And he became everyone’s mentor of choice, criss-crossing the country to observe and assist choreographers in the complicated process of dance making. (I was fortunate to be the recipient of his expertise during a choreographic seminar held in Vancouver in 1992. He was tough, gracious and unendingly patient. To this day, I remember several of his to the point comments, often delivered with an impish grin.)

It’s clearly Robinson’s nature to continually question and search; also in the early nineties he chose to pursue what on the surface appeared to be a very different kind of strict discipline. He started his practice at the Zen Centre of Ottawa, devoting himself to nine intense years of Buddhist study and practice, sitting every day for hours; he spent six of those years as a zen monk. When not in meditation or studying with his master, he continued to create his own dances and monitor others.

After his father died in 2000, Robinson moved in with his mother for six months. Then he committed to a head-snapping, 360-degree turn. He chose the path of a spiritual renegade, pursuing the good life with the same passion he applied to his art making. He drove a BMW, bought a fabulous downtown condo, purchased treasured objects, dressed in quality clothes, drank fine wine.

“I wanted something tangible in my life, something I could touch. I wanted to surround myself with beautiful things of quality. Like many others, I fell into the trap of consumerism.”

This phase came to a screeching halt in 2005. He sold the condo with all its collectibles and took stock. Robinson knew it was time for a monumental shift so he packed his bags and made the move farther west, purchasing ninety-four acres of land on Lac Leslie, not wanting to be too far away from his hometown.

That was seven years ago. Thus began his determination to build an artistic sanctuary to nourish the spirits and feed the stomachs of his creative colleagues. La B.A.R.N has developed a series of programs that have appeal for dance artists at all stages of their careers, with three distinct experiences or streams into which participants can fit, all related to his company, 10 Gates Dancing:

1. Robinson hires dancers, creates work usually with live music and then puts on shows of his own choreography, sometimes performed over two weekends.

2. A program called “Exclusive Intensives” is geared to young dancers who have graduated from a professional dance program, dancers who are on the brink of their professional careers. They have a two-hour morning class with Peter Boneham. In the afternoon, Robinson and a guest choreographer create work on the dancers, performed at the end of the two-week program.

3. Finally, Robinson offers an intensive for mid-career and senior creators, “a one-on-one experience that takes place over a five- to six-day period of being my guest.” Everyone lives together, spending the day working on solos or with their dancers, while Robinson watches. They eat supper together and discuss their work, the creative process, funding issues and life in general. Robinson’s Zen training comes in handy here, as he enjoys discussing philosophy about life’s never ending dilemmas.

Running La B.A.R.N. is a determined act on Robinson’s part, one that takes him deep into the complex, at times brutal, politics of arts funding. He and his manager Tina Legari are currently engaged in some nail-biting battles. He’s determined to make it work, so he persists with undying faith because he is on an artistic mission and a spiritual quest. Robinson will not relent in his desire to assist other artists to be the best they can be. It seems that by doing so he is also assisting himself to be the best he can be. As he succinctly puts it: “I can’t face myself without some kind of artistic vision for the future.”

For the moment, that future includes continuing to make his own work. When asked about that, Robinson says, “Well, I used to call it abstract theatrical narrative. Now I say it’s functional abstract theatrical imagistic narrative technical dance.” We both go quiet. “It’s meant to be tongue in cheek – partly.”

When pushed further to put words to explaining how he sees his work, Robinson responds, “All of my work is solo work. We are individuals among many. We are all connected yet we are alone. This is why I talk of my work as assisted solos or convergent solos or interdependent solos, even when it’s an ensemble dance.” Spoken like a true Bhuddist. Then he adds. “I’m not sure that I even like my own choreography. No one is more surprised by my success and achievements than I am. I lead a charmed existence.”

You can decide for yourself about his choreography. This summer Robinson plans to create a new work on himself (in the barn) with composer Charles Quevillon (in the field), entitled Manifeste (working title), a cryptic text-based work in which both performers can be heard and seen simultaneously yet, he adds, “We are thirty-six metres apart at times, thirty-six years apart at times.”

If you take a drive to the Pontiac, you can spend some time surrounded by the glory of the Gatineau Hills. Sip a non-alcoholic beverage from the country bar manned by his Pontiac neighbours. And inhale the creative brilliance of Tedd Robinson. I plan to be there soon, cocktail in one hand, program in the other.

Manifest runs at La B.A.R.N. August 3rd through 5th and 10th through 12th (Fridays at 7pm and weekends at 4pm). It’s open to the public with general admission. Tickets are $20. For more information, check the local country papers, Pontiac Journal du Pontiac and The Equity. Dancers can also check out www.tengatesdancing.ca for programs being offered at La B.A.R.N. and/or write a letter to Robinson for information on residencies or intensives. 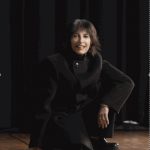 By Chick Snipper
Read more by this author