She whispers to a technician while shooting a sequence for her current dance-film project, Blanc Noir ou Rien, (White Black or Nothing) and steps lightly behind the camera dolly as it traces a wide circular path around performers Louise Bédard and Sylvain Émard. Her poise and grace, moving with the camera as it records the duos’ “eyes-closed” floor segment, makes it easy to imagine a brilliant young Renaud about to deftly enter the dance herself. Now, sixty years after her groundbreaking expressionist choreographies of the late 1940s, Renaud is dancing again on the edge. Her eyes, poetic journal writing and keen sensibility provide the figures for a new creation.

Renaud is a contemporary dance pioneer and essential reference in regard to the arts in Québec. Influential and far-reaching, her artistic career stretches from complicit and early associations with the historic and revolutionary Automatist artists and the Refus Global manifesto of 1948, through her creative output dating from the late 1940s (Déformité, Emprise), up to this current dance-film project. Emblematic of her deep dedication to cultivating artistic experimentation and development, Renaud founded and directed Le Groupe de La Place Royale (1966 through1972), co-directed Les Grands Ballets Canadiens (1985 through1988), and has served tenures on arts councils, dance faculties and consultative committees. She has been instrumental in encouraging the careers of generations of dance artists including Jean-Pierre Perreault and Ginette Laurin, and more recently Louise Bédard and Sylvain Émard. Her contributions have been recognized by a Québec Arts Award, (Prix Denise Pelletier), a Governor General’s Performing Arts Award, and an honorary doctorate from Concordia University.

Where to start on a creation now? “I simply want to begin from the instinct and personality of each dancer,” she says. The spark for Blanc Noir ou Rien originated in a proposal by the video and visual artist Mario Côté, who was initially interested in filming Renaud’s Déformité (1948). Renaud’s response: “Remounting a previous work is not a priority for me. It’s as though I just wanted to live in the past. I prefer to reflect on how I see my two dancers, Louise Bédard and Sylvain Émard, right now.”

In anticipation of her first sessions with the dancers, she noted in a journal:

I began with the pleasure of writing about how we would experience the project: what the body senses, the spirit; or perhaps even just a description of an empty space that will be filled, an energy that we will employ; a way of going beyond ourselves and on to somewhere else … or even nothing at all. We begin from nothing because an artistic creation is always new, projecting us into the unknown. 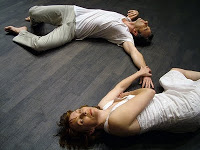 In 1991, Renaud had worked intimately with Bédard and Émard when she choreographed Blanc et Noir to celebrate the twenty-fifth anniversary of Le Groupe Dance Lab (Le Groupe de la Place Royale). Looking at photographs from that project nineteen years ago gave her the impetus to propose a new project to her two favourite dancers.

“What interested me was to work with Louise and Sylvain … I find them extraordinary. When we started working from the text I had written, it was even more exceptional because they offered me such vast generosity and complicity for my research and experimentation. I wasn’t expecting that.”

From the outset, the choreographer told her dancers, “I could only do this project with you.” Later, she added, “I knew that together, we would go beyond the technical level to a singular life-experience.” Blanc Noir ou Rien is a new creation, a dance collaboration conceived for film. The only aspects remaining from the 1991 project are the quality of the relationship between the artistic partners and Renaud’s quest for a refined, interior sensibility.

Though she is a woman whose primary creative language is dance, in her notebook, Renaud, ever the youthful explorer, carefully named her objectives for Blanc Noir ou Rien:

Attempt to explore, in every way possible, the sensations that the movements create inside you: with your partner, by your partner, in the provocations between you. Answer these sensations with your body as honestly as is physically possible. At the end of each rehearsal, the dancers should write the impressions of what their bodies and spirits experienced.

Renaud kept a journal of notes during the creation and insisted that her dancers do the same. It was not only a way of organizing her thoughts and procedures, but also a chronicle of the ephemeral beauty of her daily exchanges with Bédard and Émard. The idea of “beginning from nothing”, the blank page of a creation, became a unifying and minimalist starting point. “Nothing” became the dancer’s state of availability and the zone of exchange among the collaborators, a place of possibility and invention.

Renaud: For the sake of a common departure for our project, we accept this idea of “nothing”, with the notion that it’s a new place for all three of us. It opens the doors of our desire for discovery in yet unknown places.

Bédard: The idea of “nothing” can’t really exist in art.

Émard: It strikes me: “nothing”. Does emptiness really exist? It’s surely the “nothing” where everything is possible … I like those few words even if I don’t really know how to work with them. 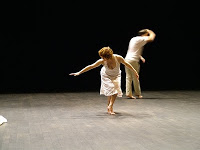 1947. The scene is the Lower East Side of New York. In the vibrant and startling post-war urban setting, the eighteen-year-old Renaud witnesses a scene near the tracks of the Williamsburg Bridge that leaves a profound impression and stimulates a seminal dance solo called Déformité: “I saw a man lying on a bench with his arm dangling. When I touched him, I knew that he was dead … I thought, life is so harsh and terrible in New York. I will try to describe what I feel in a dance.” That image and the sensations it provoked inspired a piece that is an historic reference in her oeuvre and Canadian modern dance. “The first time I explored Déformité, I took a silk sock and pulled it over my head to create a deformed effect.”

If that harsh observation was the genesis for Renaud’s first solo creation, it is likewise a link to her work more than sixty years later in Blanc Noir ou Rien. She says that in fact she is creating from the same impulse now as she did after that scene in New York with a difference, obviously, in procedure. Her research is focussed directly on the human sensations her dancers evoke rather than on forms.

“I’ve always worked from ‘nothing’, but still with the necessity to express myself … I can no longer choreograph from my own body. That’s what has changed. Now I work directly from the dancers … What remains constant is my interior research of creative instinct, the need to create.”

On the first day of exploration, Renaud directs Émard to the music of Morton Feldman, a composer and friend from her time New York and to whom she feels indebted for his influence. She suggests to her dancer, “Watch your hand. Start with your fingertips. They begin to open. Your hand opens as well and then closes. Your wrist opens, your elbow, your shoulder and finally your whole body begins moving.” Reflecting on his response, she says, “Sylvain began to simply walk in front of me, and with that music he improvised a solo that was exactly what I was looking for. The next day I was with Louise, and we worked from the same concept.” A hanging sculpture by visual artist John Heward, Feldman’s music and Renaud’s suggestions were the base materials for two weeks of studio exploration in preparation for filming.

Renaud notes the difference between “choreographing” and the collaborative process she has chosen, using improvisation as a principal tool. “I am very aware that I am working with two accomplished choreographers, so I give them a starting point and allow them total liberty. Improvisation has to happen in the immediate moment. In order to keep that spontaneity for the film, we had to take some sequences a number of times.”

The notes written by her dancers indicate that the plunge into her exploration was an elevating experience:

Émard: That’s it. The drug has taken effect. I’ve re-found my movement instinct that brings me closer to the “wild animal”. From Jeanne’s point of view there is lots of interesting material. The ambient sense of schizophrenia no longer surprises me. What’s good for one isn’t necessarily so for the other. That’s one of art’s mysteries. We attempt to understand, but there are always those questions inside of us. And we’re always prone to judgment … I felt good all through the moment. Starting from frenetic and isolated movement allows me to enter my partner’s space. Slow motion and stillness help create the spatial tensions required for our mutual understanding.

Bédard: … difficulty in releasing my weight, but still there are rich exchanges. Things flow easily and on their own. Our attentiveness is hypersensitive. Our bodies barely touch, but the contact is charged with sensations. I feel like I am somewhere else. To repeat Jeanne’s words, ‘It’s crazy for a dancer when they are seized by doubt.’ I think it’s part of my life … Let myself be taken … Live the present moment. It’s so great for me to find myself here with Sylvain and Jeanne from many points of view … I began this voyage alone, imagination there on my path. At times, the music takes me hostage. Jeanne told me, “Go ahead. Do exactly as you think …” I thought of nothing, but everything moved together, flowing from one place to another. It’s been a long time since I’ve felt that.

Renaud says she came home each day overwhelmed, dizzy and ecstatic with the power of the creative energies from those work sessions. Once the exploration and filming was over, Émard looked at the photos by Ed Kostiner and said, “I would start all over again tomorrow.” 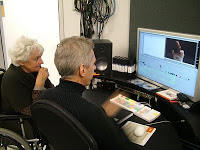 A Film, in Black and White

The contemporary Québec in which Renaud creates now is distant from the morally and aesthetically oppressive society she fled sixty years ago in order to dance.

“Where is the urgency now? For me, it’s to provide an occasion for the artists whom I consider exceptional [Bédard and Émard] … to exhibit their magnificent qualities as creative performers. After seeing the photographs of our show in 1991, I said to myself, I have to immortalize those dancers. They are so beautiful, so exacting in their expression.”

The final visual text of Blanc Noir ou Rien will be composed, together with artist Mario Coté, and edited from hours of video recordings. Renaud’s dance will emerge through the montage of images, a result of her poetic sensibility and close collaboration with Bédard and Émard. Ever the demanding artist, she set her own ultimate objective when she began the project. In anticipation of viewing the result, she reflects, “If this creative trail leads us to sense the poetic world in dance, I will have touched what I was searching to express.”

Editor’s Note: An earlier version of this article was published in French in Vie des Arts (#217). 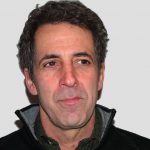 By Richard Simas
Read more by this author