How would you illustrate the life of a so-called musical madman — one with a successful musical career that spanned more than three decades but who was plagued with bouts of mental illness? Decidedly Jazz Danceworks (DJD) did so with music, movement and a little madness. Better Get Hit in Your Soul, which had its debut in 2013, illustrates the rich, turbulent history of bassist, pianist, bandleader and composer Charles Mingus, who was dubbed the “angry man of jazz.”

Rubim de Toledo, musical director and bassist, offered live musical accompaniment with drummer Jon McCaslin and trombonist Carsten Rubeling along with virtuosic recordings by Mingus and his numerous ensembles. The textured musical scores, endearing and comical interactions between the performers and impassioned dance numbers blur the line between dancer and musician, while welcoming audiences into the life of Mingus.

Eight dance sections seamlessly thread together to form Act 1. Haitian Fight Song opens with a solo by de Toledo. He ad libs a bluesy score by interjecting deep reverberating riffs with divergent rhythms. Amid a sea of darkness, the spotlight cast over him illuminates the glossy red-brown tones of a large double bass propped up by his nimble fingers. Four elegantly dressed women emerge from beside him, low and slow, nestling into the warm quality of the music. They flow across the floor with weighted and indulgent movement — head rolls, undulations, folding limbs — to invite the audience into their interpretations of the soundscape.

The women freeze at centre stage as the bass motif at the heart of the tune enters and the lights come up to introduce four men, who appear suspended in the air against a black backdrop. With an especially responsive audience in attendance, this image was greeted with chuckles, adding to the playful atmosphere of the number. Taking in the full scope of the stage, it becomes clear that the men are hanging on to a large bass bow suspended in the air. Behind the dance ensemble sits a looming black staircase, and the trio of musicians occupies stage left to complete the abstract scene.

With immense control, the four dangling men swivel, twist, bend and stretch their legs as if they’re in a vat of maple syrup. With a timbre equally as sweet, the tune continues as the upstage curtains, concealing a wall of windows, open to reveal the downtown streets where the Calgary Tower stands tall and proud. The scene is enthralling. As the men drop and the company of dancers partner off into swing duets, with a few dancers hanging to the sides and every so often mingling with one another and the musicians, the scene of a 1950s jazz club in New York comes to life. The imagery of a silent bustling cityscape is echoed in the dancers’ comportment. There exists an undeniable sense of liveliness, even urgency, in their bodies projected by rapid rhythmic sensibility in their feet in connection with Mingus’s ambitious musical score. Their upper bodies float in contrast, with ease and quiet confidence.

Adding a note of suspense is “Cumbia and Jazz Fusion,” danced by Natasha Korney and Sabrina Comanescu, which interprets the romantic tension of Mingus and his many wives. The pair taunts the audience with sharp, full-bodied juts of the head, traversing the stage with smooth and isolated sways of their hips and shoulders to emulate the ebb and flow of the music. Alluring and strong in their movement, the pair seem relaxed yet ready to pounce at the audience at any moment.

Cheeky interactions between the dancers and musicians are interspersed within the zealous numbers of Act 1. Catherine Hayward playfully manipulates de Toldeo to inconspicuously introduce the music motif of “Hobo Ho,” and Kaja Irwin and Rubeling pair to play the trombone; Irwin uses her torso to change the length of the trombone slide.

The orchestral makeup of “The Children’s Hour of Dream” introduces Act 2 with an eerie tone as the dancers emerge from the wings with slow-motion walks across a dimly lit stage. The movement vocabulary comprises ducks, dives, shoves and punches as the atmosphere grows darker, like Mingus’s life did. Upholding the hostile mood is “Tonight at Noon,” an up tempo frenzy of a tune that features improvised solos from Rubeling and McCaslin. Mingus’s infamous axe chase serves as the backdrop for this number, amplified by references to his insanity. It is danced by the women of the company, and elements of theatre are dispersed in the number as Comanescu walks into the audience and accuses us of not paying attention. Korney begins a rant as she stares down an audience member sneering, “What’s so damn funny?” The highlight was Hayward, in true Mingus fashion, chasing Irwin with an axe from behind the transparent windows. The chaos, however, doesn’t distract from their grounded movement quality, which is the site of immense expressivity.

The company’s physicality is on full display during Better Get Hit in Your Soul, in which they deliver transcending leaps, jumps and turns in dynamic spatial formations while spirited vocalizations add to the vibrant score. “Myself When I Am Real” closes the show and showcases Mingus’s irrefutable piano skills. It’s a moment of simplicity, of stillness. The score is tangibly raw as the dancers slowly and delicately remove their clothes and the musicians strike the stage.

Better Get Hit in Your Soul edges into the realm of interdisciplinary as the dancers and musicians intermingle in a shared artistic experience. There is no notion of one art form holding privilege over the other; instead, there unfolds a three-way dialogue as the converging art forms are equally as receptive to the audience’s energy. The show is beautiful in that it doesn’t intend to paint Mingus as crazy or sane. Whether you perceive him as the neutral guy, the angry man or the loving gentleman is open for interpretation. Audiences will undoubtedly appreciate the breadth and depth of his body of work and his colourful, enigmatic character. 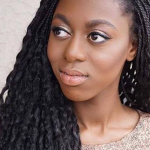 By Cindy Ansah
Read more by this author