It was a hot Saturday afternoon when I set off into downtown Toronto to attend two shows at my first-ever Toronto Fringe Festival. I had some idea of what to expect in terms of festival experience, but wanted to be surprised and respond genuinely in the moment to these new works, so I avoided reading any reviews or descriptions.

The first performance was entitled The 10/10/10 Project, presented by the Bismuth Theatre in a small, intimate venue. The work asked ten writers, ten choreographers and ten composers from across Canada to create, inspired by the following prompt: “there’s something here that shouldn’t be.” The results were then tied together resulting in one cohesive performance. The performers were actors as well as dancers, communicating through monologues and dialogues as well as movement. Disconnected spoken-word vignettes came together with dance to present questions about connection, communication, inspiration and human relationships in general. There were several comedic moments, at which the audience laughed loudly and appreciatively, but also a great many with emotional tension. The performance switched between speech, pure movement and a combination of the two quickly, making it impossible to experience any one emotion or sense for too long.

The movement motifs throughout the piece reflected those found in the monologues. A most prevalent example was when the performers would raise their hands, especially when about to speak, and pull them forcibly back down, as if having changed their minds. This action created an atmosphere of urgency and a need to communicate, but the inability to do so created a sense of frustration or hesitation to share. Overall, The 10/10/10 Project was an interesting and innovative work, appealing to dancers and non-dancers alike.

There were several hours between The 10/10/10 Project and the next performance I was attending, and much of that time was spent finding the next venue. A word of advice to future festival attendees: map out venue directions before heading out if you are unfamiliar with the area. It will save a lot of time — and prevent sore feet.

The Randolph Theatre, the venue for Kojira by Toronto’s random acts of dance, had a larger capacity and a wider stage. Choreographed by Liisa Smith and Julie Grant, Kojira was made up of three separate dance works, all related to the themes of thawed rivers of spring. The first piece choreographed by Smith was my personal favourite, a strong contemporary work performed by four dancers (Grant, Candice Irwin, Heather MacPhail and Marlowe Porter) embodying the movement of a river. The dancers were constantly in movement; flowing, breathing, swaying, connecting with the ground and with one another. A particularly strong section of the piece involved the dancers moving around and over one another diagonally across the stage, dancing like the movement of a current.

The second piece on the program was a solo by and performed by Grant. It used silver plates and a raincoat as props and was an ode to the relief and rebirth brought by rain and water.

The final piece on the program by Grant felt the most “human,” with four dancers (this time Irwin, MacPhail, Porter and Smith) executing interesting shapes throughout with technical strength and proficiency.

The quality of both of these shows has given me an incentive to attend the Toronto Fringe Festival as well as similar events next year. Both programs were fresh, inspiring and full of creativity, truly deserving of their selection. 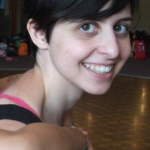 Tagged: Contemporary, On the Ground, Physical Theatre, ON , Toronto