A standing ovation rippled across the house for the cast and crew of The National Ballet of Canada on the opening night of John Neumeier’s Anna Karenina. As the curtain fell, the air swelled with tenderness. Rendering a minimalist spin on the cautionary tale of affair-turned-despair — deeply rooted in Russian Romanticism — Neumeier produces a vaguely familiar version of Tolstoy’s 1878 novel. Doing away with historical realism, the choreographer spotlights his signature eclecticism in this production (as in his others, such as last season’s Nijinsky). That said, his crisp contemporary style, clearly situated in a globalized present, manages to blend well with the decadence of the tragic love story by satisfying both old and new tastes. Through the three-hour dance drama, spectators see a brisk sequence of episodes negotiating pleasure, pain and provoking, dizzying gut responses.

Neumeier’s Anna Karenina weaves a panorama of themes — at times personal (raising issues of mental health and illness) and at times collective (delving into economic inequality), culminating in one staggering ensemble finale fusing both. The ending folds in succinctly, albeit a bit sentimentally, leaving room for afterthought. No wonder the final applause was instinctive and unrelenting: the show hits a nerve without moralizing.

This Anna fully embraces the universal taboo of hypocrisy — private and political — as its ongoing focus. To this end, Neumeier, who in addition to choreographing the show also acts as its chief set, lighting and costume designer, chooses a mainly nondescript backdrop. Are we in Russia, in Alabama or in rural Alberta? The landscape is left unclear. At times, dancers appear grounded in front of large geometric Mondrian-inspired planks and wooden scaffolding; otherwise, they “float” against a baby blue sky, out in the fluffy ether. Spectators are liberated by this familiar yet ambiguous imagery, free to envision the story wherever their imagination guides them.

Against the demure black, white and blue scenery, disrupted by curated splashes of morbid yellow and red, Neumeier harmonizes incompatible choreographic forms: the cast appears both en pointe and with barefoot flexed feet, in starched business suits and in buttery silk frocks, to orchestral symphony and to industrial noise. The result is shrill but surprisingly coherent. The mise-en-scène and the dancing mirror each other. Neumeier’s is a calculated cacophony: every moment counts in his visual vocabulary. A confusion that ought to repel the eye and ear instead manages to hypnotize.

Two particular episodes raise the electricity in the hall, leaving viewers breathless. In the first act, it is the “cyborg” pas de quatre between Kitty, Levin and their simulated selves projected two-dimensionally on a screen. The cinematic Kitty (Antonella Martinelli) and Levin (Félix Paquet) ever so slightly lag behind the live duet right beside them, intentionally creating an enhanced virtual reality experience. There is nothing gratuitous about the high-tech staging here. The ebb and flow between electronic and embodied movement succeeds in producing an uncanny optical illusion of blurred, non-linear time, helping the story along. Martinelli’s abrupt convulsions, offset by Paquet’s fluidity, are given a “double take” to let the feeling of anguish truly sink in as Kitty suffers an eviscerating mental breakdown. In the same stroke, the virtuosity of the dancers’ exquisite classically postured, controlled legwork and port de bras is brought to attention with steady, undulating camerawork.

The second standout moment is the frenetic “dreamscape finale,” which punctuates the downfall experienced by Anna (Svetlana Lunkina) in the second act.  Here, conversely, instead of a zoomed-in emphasis of craft by individual performers, nearly the entire company spills onto the stage at once as an amorphous mass. The senses go into overdrive as all of the show’s supporting characters are reintroduced in a new light: friends, foes and foils from Anna’s past and present collude in a twisted, rainbow bacchanale predicting her future. The human body is multiplied and contorted into a myriad of anonymous versions in this vast climax scene — a dipping penché here, a buoyant jeté there — all to illustrate the complexity of the irreconcilable secrets permeating the landscape of Anna’s mind. As her inconsolable inner state is made external, the taboo erupts completely: she is turned inside out.

Together, these two scenes show two distinct ways technology and smart design may work in symbiosis with dance rather than in spite of it or neutrally alongside it. And in all other aspects but two, Neumeier’s mastery of hybridity as a designer-storyteller is seamless. If not for the choice to cast the distractingly grown-up Spencer Hack as Anna’s spirited nine-year-old son, Seryozha, (while very talented child dancers appear in solos elsewhere in the production) and the ill-fitting emphasis on the sport lacrosse as a pantomime for battle in lieu of horse racing (where fencing would have sufficed as a theatrical stand-in), Anna Karenina lets glimmers of Tolstoy’s kaleidoscopic prose shine through a contemporary lens for a new generation. 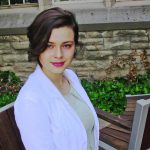 By Anna Paliy
Read more by this author