It was the weekend of the Bridgetown triathlon. Spandex warriors, with black numbers greased on their arms and riding expensive road bikes, were involved in acts of self-assertion and endurance in the day’s heat.

Farther down the highway, at the Granville Ferry Hall, Company of Angels presented Lighted Rooms. Dressed in black, the company performed their own acts of self-assertion and endurance with another finish line in sight, the one we all have to cross at the end of our lives. The youngest company member is sixty and the oldest is seventy-five.

Lighted Rooms is a hybrid performance that defies categorization. It is a series of poems, story monologues, dance, song and bawdy limericks, an hour-long string of pearls whose thread is the energy and commitment of an extraordinary group of performers.

Lighted Rooms begins with Philip Larkin’s poem The Old Fools presented by one of the performers, Phil Roberts, spoken as if it were his own musings on aging and his own physical and mental condition. The title of the performance is a reference to lines in the poem that suggest being old is like having lighted rooms inside your head, rooms filled with people. The company uses The Old Fools to situate the viewer in our culture’s negative view of aging. Larkin is writing from the outside looking in. His poem catalogues tragic conditions of aging: paralyzing fear, memory loss as identity loss, stigma and isolation.

Company of Angels’ performance becomes a radical act of being visible, demonstrating that people who society writes off as “the living dead” have lives of passion, need, fallible memory and earthy biting humor. Over the course of the evening, ten luminous angels become storytellers, dancers, singers — complex individuals who offer us glimpses into their families, their choices, their loves and losses.

One memorable sequence in Lighted Rooms is the presentation of a song and dance from Gilbert and Sullivan’s The Mikado. One of the performers recounts the story of his grandmother, an opera singer, who toured with the D’Oyly Carte Opera Company. A chorus member, she dreamed of singing a lead role. One day she got her chance to sing the role of Pitti-Sing. She never returned to the chorus. The grandson recounts an evening when his grandmother is asked to sing the role in the parlour for her guests. She declines but says she’ll dance the role of Pitti-Sing. Suddenly, the cast members become Gilbert and Sullivan actors and singers. Their pantomime, period gestures and exaggerated movement choices required by light opera take the viewer back in time. For a moment the audience is in a small regional theatre in Britain before WWI.

Lighted Rooms asks us to engage in a radical act of listening, not as audience members but as individuals on the same journey, accumulating our own stories and facing our innate fear of aging and death, and meaninglessness. We also have to come to terms with the depth and pervasiveness of ageism in society.

We are privileged to be in the company of angels who are being themselves and becoming themselves as they fill a changeable present in which the past and future blur, a fluid grace, wonder, beauty, kindness, connection and the raw human condition. Their pleasure speaks volumes, telling us that one’s self is greater than the sum of one’s memories and that being onstage is so much more fun than acting your age. “Act your age!” being that admonition that censors our choices by demanding that we behave in ways deemed appropriate for our age.

Work on Lighted Rooms began two years ago, growing out of “Poetry and Pasta” evenings, informal social gatherings where, over dinner and wine, the company read poems and shared ideas and stories. Company of Angels Artistic Director Randy Glynn began channeling the “Angels” stories and anecdotes into an evening of text, music and dance. In 2015 the raw material was workshopped with Director Layne Coleman. In early June 2016, rehearsals began.

Coleman, the creation dramaturge and director of Lighted Rooms, is an actor, director, playwright and producer who has spent over forty years creating and advancing new Canadian plays.

Lighted Rooms is Company of Angels’ and choreographer Randy Glynn’s second creation. Their first, Dancing in the Third Act, was inspired by Pina Bausch’s Kontakthof and by Jane Fonda’s TED Talk about reimagining the last three decades of life, “Life’s Third Act.”

For Dancing in the Third Act, Glynn trained the company using specific techniques loosely based on BrainDance, a holistic approach to dance/movement expression developed in Seattle by dance educator Anne Green Gilbert. That training has been carried forward into Lighted Rooms where it has created articulate performers who can access a range of qualities and dynamics. BrainDance has given each of these non-dancers a connected body and a unified presence that lifts them out of the random and ordinary into simple, poetic and authentic movement and vocal choices that distill the essence of life as each person lived it.

There is a terrifying and darkly comic group scene that uses a monologue taken from Joyce’s A Portrait of the Artist as a Young Man. Phil Roberts, playing an elderly Irish priest, delivers an over-the top-fire and brimstone sermon on venial and mortal sins. The rest of the performers, playing children at a mass, are seated in a pew upstage. With just a catch in the breath, a change in tension in the hands, a glance sideways to another child, a ripple along the spine, they draw the viewer into a child’s world of fear, guilt and the anticipated torments of burning in hell forever.

Over the course of the evening, Lighted Rooms asks us to take control of our fears and explode the negative stereotypes and culturally established narratives around aging. The cast inspires us to create our own present as full of grace, courage and humour as the present moments they have created onstage. By the end of the evening, all of us have moved very far from Larkin’s The Old Fools into new territory, a third life beyond adulthood.

After the performance, Glynn asked audience members to write their comments in notebooks he provided. In one, I found this: “I didn’t realize how badly I needed to see this.” 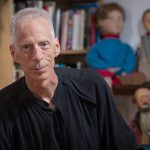 By Don Rieder
Read more by this author