“Create your own ceremony based on the traces Mother Nature makes,” says Olivia C. Davies, choreographer and O.Dela Arts artistic director, in Wishing Well. That is exactly what she and her co-creator, Melissa Frost, have done with this new piece full of thoughtful ritual and based on Indigenous cultural teachings and traditions.

Cedar boughs create a boundary between audience and performance space in the Firehall Arts Centre courtyard — Wishing Well was one of only three in-person works shown at the 2020 Dancing on the Edge Festival, with the rest of the festival presented online. Three dancers slowly move on and around picnic tables as the masked, physically distanced audience settles in at ground level and up on the deck. Music fills the air, mixing with the sounds of the street — sirens, voices, a cawing crow.

Sharon Jinkerson-Brass, multimedia artist and community leader, formally welcomes us, thanking the creator and setting a reverent tone for the evening. Ziyian Kwan, Kelly McInnes and Rianne Svelnis casually disperse themselves among the picnic tables to the left of a small stage. Their movements are subdued and minimal as Davies and Frost provide poetic voice-over, explaining that there are four things that everyone needs to find balance: belonging, independence, generosity and mastery. Wearing floor-length skirts and colourful scarves, they walk the length of the courtyard, weaving among the others as they talk about those four interconnected pillars, ancestral memory, yearning and roots.

McInnes has a turn on the small stage first, taking a long red string out of a basket that Davies has placed there. As she loops the string around her neck, it’s a physical reminder of the interconnected nature of not only all living things but also the four pillars mentioned earlier. McInnes covers her mouth and reveals a silent anguished scream. With arms outstretched, looking up at the sky, she spins while repeating “I wish you well” in exasperation.

When Svelnis takes her red string out of the basket, she also wraps it around her neck. Using her breath to mimic the wind, she rolls her body, her heavy head leading the way as the string pools on the stage. Davies and Frost continue their spoken word accompaniment, talking about diaspora, displacement and being carried away by the wind. They speak in a rhythmic cadence, using powerful metaphors and imagery such as DNA intertwined like sweetgrass.

When Kwan takes her red string out of the basket, she loops it around each wrist. Her movements are slow and contemplative. “I’m deciding to make a wishing well,” she says, placing the string in a circle around her feet before also looping it around her neck.

With everyone gathered onstage, Davies takes a bowl and glass decanters out of a silver duffel bag, pouring water into the bowl while she explains the purpose of her actions and the entire piece: “To bring ceremony home to a place where it’s accessible yet grounded in teachings and traditions; to share a circle of courage with all of you; to speak up about the effects of displacement and the trauma downloaded through generations; to transform reality with our intention; to remember reality is malleable, tractable and yielding; and to close our eyes and make a wish.” She drops a coin into the water.

While the ritual, core concepts and powerful spoken word all contribute to a meaningful piece, the result feels unfinished and raw — each element and segment not quite a seamless part of the whole. With Davies’ wish and purpose in mind, the preceding actions take on new meaning, and her motivation to create a space for sharing, transformation and ceremony becomes clearer. 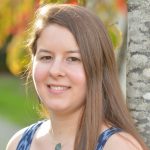