There are a hundred reasons a fire will go out.
A hundred more why it will not start.
The wood too wet, the kindling too fine, the fire-worshipper impatient and simply unable to light the dampened match.
But our most natural state is to burn. Our home is to burn.

As the snow hits the ground again, and as the Prairies are, at the moment, the coldest place on the planet, we realized that it has been exactly one year since we got together in Saskatchewan to create the first draft of our duet the understory. What follows could be called the understory of the understory. We hope that it might give you a bit of warmth during these cold days and nights. Like our duet, this text is co-written.

Bee and Johanna  We have been engaged in a steady collaboration, working and training together since 2006. Our ongoing duet relationship, which has become the understory, has been evolving since 2008. As co-creators, we often explore the notions of memory, distance, environment and relationship. We collect and collage, moving between the pedestrian and the poetic. We place found objects and texts alongside things we fashion with our hands and hearts. Our collective choreography is grounded in a commitment to lay bare the relationships at play within process and performance.

Bee  I arrived in Regina in the middle of a cold snap: daytime highs were close to minus 20. I slept fully clothed with several blankets on at night, and wore at least three layers of clothes in the day. We worked in New Dance Horizons, a studio that lies on what used to be the outskirts of town in an old church building. Sometimes we walked to the studio. It was a treacherous walk, icy and blustery, but not without beauty. It was often sunny, and there was a blanket of snow everywhere, a big sky and blinding white light. On very cold days we drove over icy roads and packed snow. We tried to stay warm in the studio. We rolled up in our blankets and danced in our coats. We talked about the transformative power of fire and heat. We looked outside and saw the quiet fallowness and expanse of the prairie landscape.

Johanna  The conditions of this place cannot help but inform the content of our work. In some ways, the most overt condition of creating work in Saskatchewan is solitude. Solitude is a reality of the prairies. It is present in the aesthetics of this place. Long reaching fields with no one in sight; a sole figure walking on the rolling hills of the south. This solitary feature, which can be easily mistaken for isolation, is rendered even more prominent once winter washes over the scene. The cold, even in an urban centre, naturally draws people indoors. This landscape offers a unique and private atmosphere for creation. The action of coming together, for work, or company, or warmth, is a deliberate action in the wintertime.

Bee  We started with the most basic agreement: we would create the piece as two solos and a duet. We brought together our objects, text and music into the studio, and began working with the blankets as a potential solo for Johanna. The blankets, which we found backstage at New Dance Horizons, were moving blankets (the kind used to wrap furniture for storage or transport); they had a thickness and a stiffness that invited shaping and sculpting. Johanna had the idea of building something with the blankets, a kind of fort or shelter, but to build that shape first with the body. So we started with Johanna blindfolded, folding and unfolding her body, and eventually shifting to the folding and unfolding of the blanket. Through experimentation, we found a folding ritual: separated in space, we each fold three corners of a blanket into the centre and lift the last corner into the air, forming the shape of a triangle or sail. 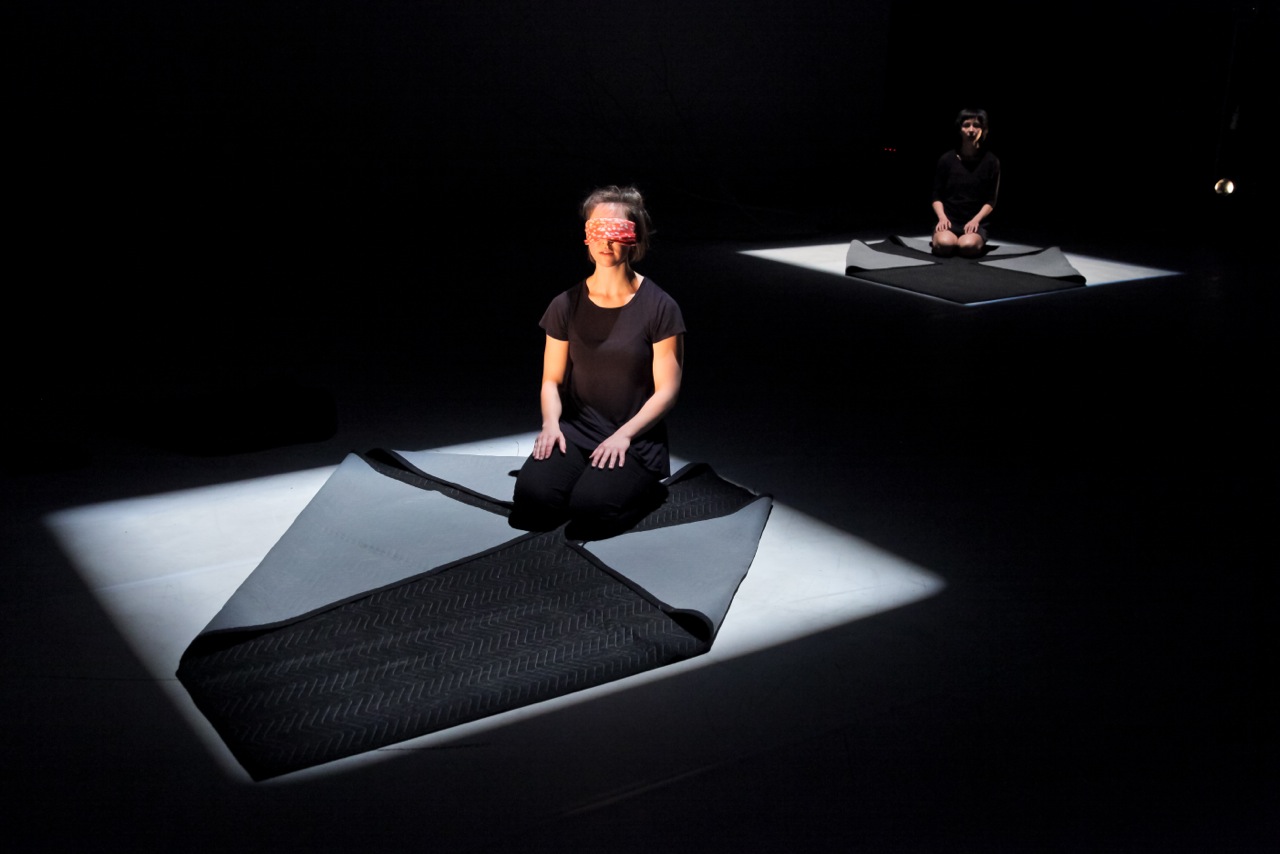 Johanna  Bee said something to me about starting this process from where we left off, which is to say, as a continuation of our work together in the spring of 2011 in Regina. That work had led us into some explorations that I still felt curious about.

One of these scenes involved reading/reciting Robert Frost’s poem Birches, while wearing a blindfold. I had the sensation, while speaking Birches, that I was trying to will myself into a tree.

There are these elm trees in Regina, wrapped with bands to ward off Dutch elm beetles. Bee and I used to walk past them on our way to the theatre. If you squint, the trees look like blindfolded women reaching upward. This image of a blindfolded woman felt important to me; I imagined it as a gesture of faith. The more I pursued the importance of this image, the more a local association with the image started to unfold.

There is an urban myth in Saskatchewan, all of us prairie kids know it. It says that every tree in Regina was planted by hand. I think this legend is intended to boast about the industrious ethic of prairie folk, and perpetuate our pioneer identity. But it also explains why the trees here are so immature in comparison to other cities.  If you stare at the elm trees long enough, you start to realize how young and precarious they are. Surviving out of context. I am drawn to the image of a solitary tree. And I also knew that branches and trees are recurring images in Bee’s work.

I was interested in the thematic intersection between faith/blindness/trees. And for whatever reason, I had done some writing about this triad before, in a piece called it takes faith to be an arsonist. This writing drew a relationship between arsonists, votive lighting and controlled forest burns: transformational acts of fire.

Bee  We continued our exploration with the blankets and found that the sail could transform into an egg shape, as Johanna drew all four corners together and enclosed herself in the blanket. There she found a brief stillness, and then a gentle rocking from side to side. As Johanna emerged from the egg shape, the edges of the discarded blanket defined the edges of a flame or fire. So the next step seemed to be clear: she put on a pair of red shoes and a red jacket, and danced, using the crumpled edge of the blanket as her score. 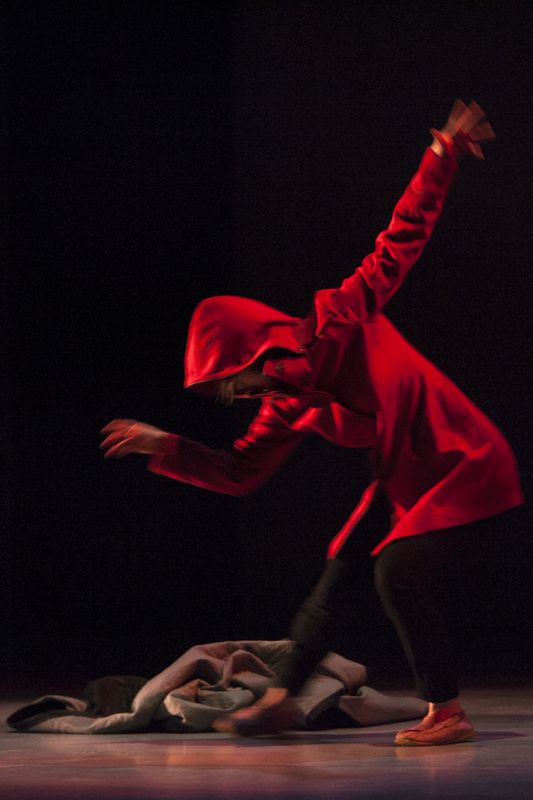 To light a fire requires a certain amount of faith. Of course the conditions need to be just so; the wood bone dry, the wind dead calm, the fire sunk into the shelter of a pit. But even with all of these conditions well aligned, a fire can go out.

Bee  In the fall I had watched Pour la suite du monde, the 1963 Québécois documentary by Pierre Perrault. The film traces the story of what happened when old-timers from Île-aux-Coudres, a small island in the St. Lawrence River, were persuaded to revive a local whale-catching practice. In the film, there is a scene where local children are playing inside a barn with tractor tires. I was charmed by their mischievousness and their great sense of play. The tires had so much movement potential, supporting and guiding the children as they moved through the space, offering acceleration and changes in orientation. I wanted to work with the tire in this solo, drawing on their sense of play. We developed a squeaky entrance, in which I rolled in while lying inside the tire. What followed was a very simple sequence of standing, sitting and experimenting with the tire at different angles and orientations. The solo was both cheeky and absurd. Johanna suggested adding some text about a “tire-kicker.” We found this text in the online Urban Dictionary and layered it on top of this solo: 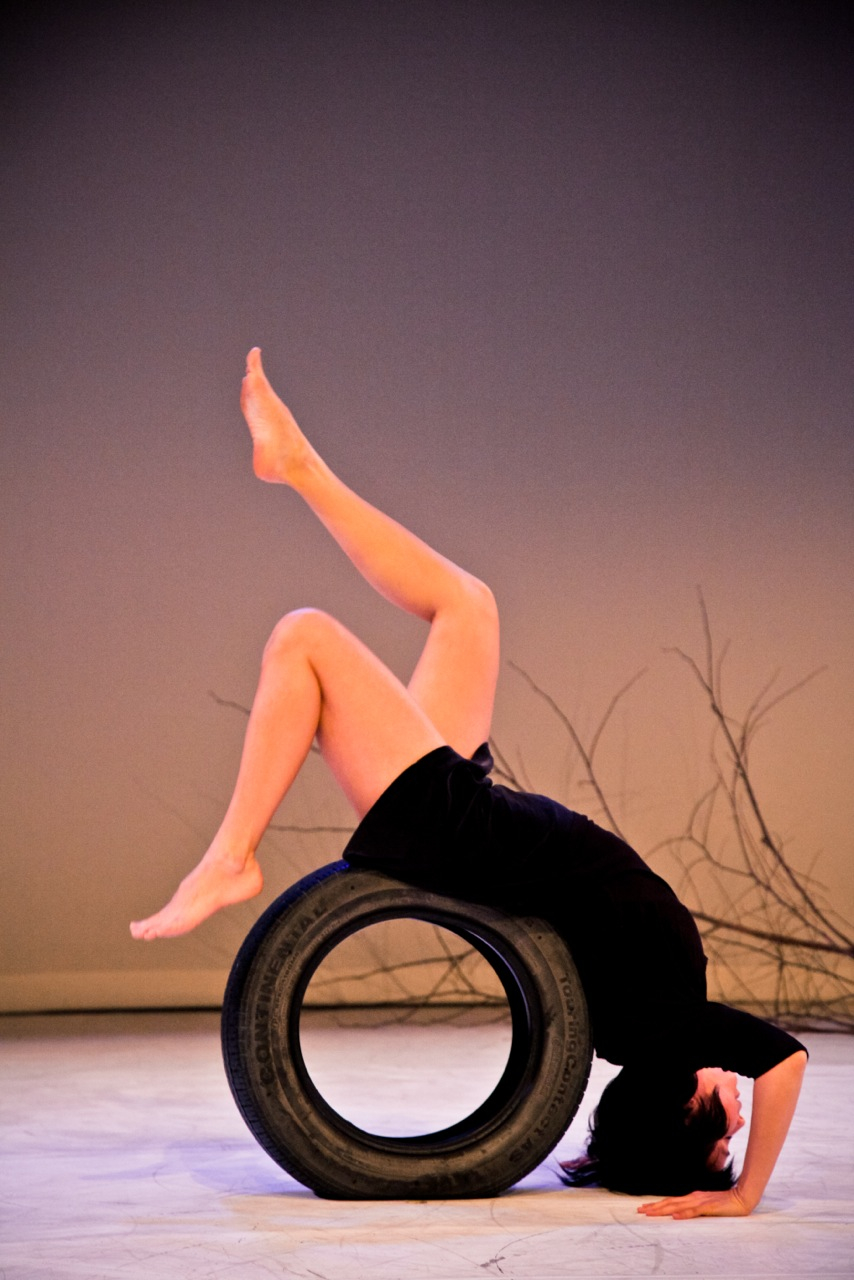 Tire Kicker: someone who is indecisive about purchasing a product or service, and never feels satisfied with what they are offered. In the end a tire kicker may or may not buy. The term comes from salespeople at car dealerships. Tire kickers would come around frequently, kick the tires a few times on the cars that they liked, but never make a solid purchasing decision on any particular car.

Bee  Just preceding the scene with the tires in Pour la suite du monde is a scene in which a group of men are out in the St. Lawrence River, constructing the weir that will be used to trap the whales. They cut the bottoms of small trees into stakes, load them up in small boats, then press them into the riverbed every metre or so, creating a long, curved enclosure. I had an idea to assemble a similar kind of construction onstage. With the tire and the blankets, we tried to create a small forest with doweling, using some small branches we had with us in the studio. Instead of a weir, we tried to construct the understory of a forest (the lower layer of the forest that grows beneath the canopy of taller trees). And as we did this, we tried playing some recorded text written by Johanna, as if the understory was speaking to us.

We then began a duet centered on becoming the understory, moving not as ourselves but as a landscape. Everything had led us to that moment: where all of the objects in the space came together to create a part of the understory, and we move also as part of that understory. We tried to decentralize our importance in this work, letting ourselves connect with and become part of the environment that surrounds us. In a way it was also a dance of forgetting, in which we moved beyond our pasts, our selves, even our species. Certainly when I dance it I understand what Eiko and Koma mean when they say, “it is a relief for us not to be confined by humanity.” 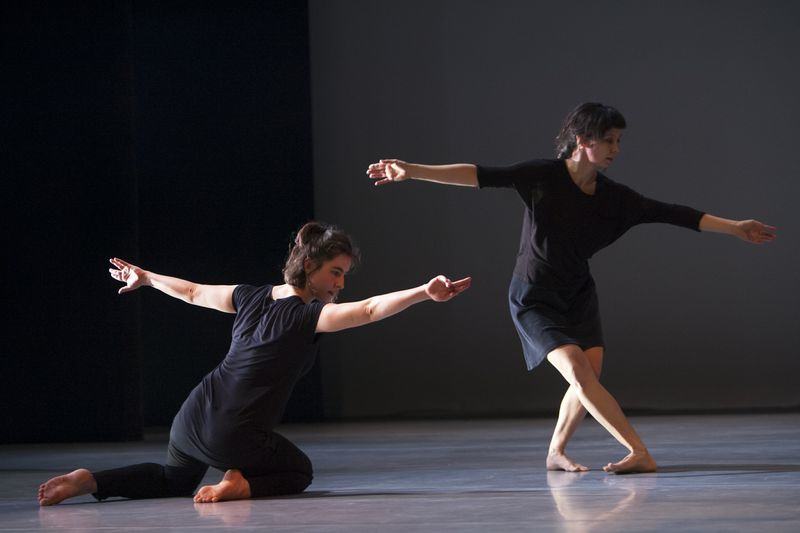 Last night I dreamt I was a sequoia rallied by the swailing — the controlled burn raged and I was on fire. Crackling from the inside out. All my skin is destroyed. Not a hint of container. I am porous ash upon the windy ground.

the understory took shape throughout the fall and winter of 2012, while Johanna was in residency at New Dance Horizons in Regina. A version of the work was presented at York University in Toronto last winter as a part of Bee’s MFA thesis work in Choreography & Dramaturgy. This season the understory toured to Calgary and Winnipeg in October and will continue to tour the Prairie Dance Circuit with performances in Regina (February 13-14), Saskatoon (February 22-23) and Edmonton (February 28 and March 1).