Mark Godden’s Dracula is a twentieth-century Goth guy (the dance premiered in 1999) tricked out in nineteenth-century vampire garb. He’s been clever enough to get himself a film deal (Guy Maddin’s “Dracula: Pages from a Virgin’s Diary”) that garnered rave reviews around the world. Performances of his ballet have met with critical and popular success in North America and, more recently, China. When he’s in his home at Winnipeg’s Centennial Concert Hall, the Count puts on a show that seems to mesmerize his captive audiences.

When “Dracula” premiered in Winnipeg in 1998, many critics thought this ballet had teeth. After many successful shows, it was inevitable that the RWB would wake Dracula from his deep repertory sleep to perform the 131-minute nocturnal dance once again, and this year it opened the company’s 2005/2006 season just in time for Hallowe’en. This time, the work featured principal dancer Jaime Vargas (alternating with Alexander Gamayunov) in the title role that Johnny W. Chang originated (Chang has since retired and is now ballet master). Tara Birtwhistle reprised her signature role as Lucy (alternating with Vanessa Lawson), and CindyMarie Small danced as Mina (alternating with Sarah Murphy-Dyson).

Godden’s earlier works while resident choreographer with the Royal Winnipeg Ballet (RWB), which ranged from the whimsical “Dames au Fruits” to the darkly romantic “Miroirs”, always had a smattering of sexuality — but nothing too perverse. After all, this is mainstream ballet. A dose of humour and irony, and a bent for twisting formalistic ballet was distinctively “Goddenesque.” Now the sight of ballet dancers with their arms and legs akimbo always brings Godden to mind.

Alas, the initial thrill of the “Dracula” phenomenon may have faded, as the Winnipeg audience at the last performance this season seemed to be appreciative though not energized by the show — if the applause was any indication. Thankfully, it didn’t receive the robotic standing ovation that Winnipeggers have become known to give any show that doesn’t completely stink.

“Dracula” the ballet is strangely commercial, tepid and conventional, belying the years of artistic achievement the choreographer has on his resume. For a contemporary ballet, it’s a high concept work like you’d find on Broadway that only gives a nod to Godden’s daringly experimental and sometimes challenging works. As the dance critic for the Winnipeg Free Press for more than ten years, I didn’t like everything Godden created but I respected the American-born choreographer’s efforts to break new ground and create a distinctly Canadian voice — a blend of American brashness and European romance.

Not that there’s anything inherently wrong with commerciality, because many of the greatest works in classical ballet have been a hybrid of marketability and artistry. And not that “Dracula” the ballet is a failure, because it certainly entertains and has moments of real aesthetic brilliance. The problem is that without the depth of artistry that characterized many of Godden’s other works, it may lose the cachet it had when the idea of a gothic/romantic contemporary ballet based on Bram Stoker’s novel was still a novelty to ballet audiences. Godden’s legacy should be “Miroirs” or “Angels in the Architecture” or many others, not this un-striving work.

The dance opens with Lucy standing beneath a backdrop where a scrolling message projected behind her introduces the premise of the story. Act I, Scene 1 takes place in Lucy’s (Tara Birtwhistle) bedroom where her nightmares and sleepwalking draw the attention of her three suitors and the vampire specialist, Dr. Von Helsing (Darren Anderson). When the doctor discovers two bite marks in her neck, he realizes she is under the spell of a vampire. In scene 2, set in Lucy’s crypt after her death, she reappears as one of the un-dead to the doctor and her suitors. Long-time Godden collaborator Paul Daigle’s set and costume designs, and David Morrison’s evocative lighting design, create a theatrical look and feel that doesn’t cross over too far into camp.

Apart from the wonderfully transcendent music of Gustav Mahler, performed with flair by the Winnipeg Symphony Orchestra and the Winnipeg Singers, the first act fails to build any real dramatic tension, and seems to belabour the story at such an early stage: okay, so she’s become the love slave of Dracula, let’s move on already. There’s very little in the way of good choreography here, just a lot of staging and character work. Birtwhistle thrives in roles where she can act, react and emote but she’s also a technically proficient ballerina whose gifts are withheld from us for nearly forty-five minutes in the first half of the ballet. Only the second scene, where Dracula appears and battles unsuccessfully against her suitors, do we get a taste of the dance to come.

Act 2, which is where the ballet should have begun (but then it wouldn’t be a full length evening, would it?), is a considerable improvement. While it begins with a funny recap of the entire plot performed at high speed by dancers while narrated offstage by Winnipeg actor Richard Hurst, this stylistically incongruous bit of postmodernism doesn’t really add anything to the dance itself, but it does remind us of the sly Godden wit.

In the ethereal “Red Dance” sequence that follows, we see some of the most artistically inspired work in the program, which was performed with real ballon, using the RWB’s new sprung sub-floor. Sarah Murphy-Dyson (alternating with Emily Grizzell and Tara Birtwhistle) performs the role of the Red Girl (a seductive, demonic figure) en pointe along with other artists of the company. Yet it is Small, haunting in the role of the demure but sexually repressed Mina in Scenes 2 and 3, who is one of the most underrated dancers in the company — perhaps not as technically gifted as Birtwhistle but possessing more star-quality and lyricism.

While many reviewers have lavished this ballet with praise for its sensuality, much of it emanates from the original Stoker story rather than the choreography. In fact, “Dracula” is rather tame, as Godden ballets go, and seems to shy away from the choreographer’s noted energy, angularity and sexuality, while remaining corralled within neoclassical ballet and folk dance rather than taking Godden’s contemporary ballet vision to new levels.

The final scenes 2 and 3, set in a Budapest convent and Dracula’s Transylvania castle, respectively, create the kind of mise-en-scène that audiences expect from this kind of narrative ballet. Mina (a former friend of the now dead but vampire-free Lucy) is summoned to the side of her ill fiancé, Jonathan Harker (Gamayunov, alternating with Vargas), who has been assisting Dracula with buying real estate in England. As the story progresses, Mina is fascinated with the three vampire women who are Dracula’s minions, and is later taken captive and spirited away to the Castle in Transylvania. While Dracula drains Mina’s blood, he is cornered by Van Helsing and the suitors. The men, who have been pursuing him since he killed their beloved Lucy, now spear and behead the Count in a wonderful Grand Guignol moment.

The drama is there, with some of the richest moments being gestural rather than kinetic. However, we leave with the feeling of being a little drained rather than inspired after 131 minutes of performance. 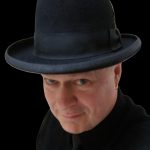 By Garth Von Buchholz
Read more by this author