The 7th Soo Ryu Dance Festival, commemorating 50 years of Canada-Korea diplomatic relations, featured traditional Korean dance as well as other cultures and artistries in Asian dance performance at the P.C. Ho Theatre in Toronto. The festival opened on November 4th with dinner and performances at the Korean Cultural Centre. On November 5th, the performance began with the Jinju Sword Dance (considered South Korea’s Intangible Cultural Asset #12), showcasing six dancers of the Jinju Sword Dance Company from Korea performing this traditional royal court dance. In reverent synchrony, the dancers breathed deeply and steadily to a solo drum, throwing and retracting forearm-length swords. Their removable sleeves colour-blocked in vibrant blue, yellow, pink and green, accentuated the twisting of their wrists while the red tassels on each end of the swords rebounded at every throw. Maintaining a neutral expression on their fair faces and scarlet lips, they reminded me of porcelain dolls moving through the flat bright sound of a Korean oboe. The Hong Ae Su Goen Dance (also known as “the red and white towel dance” and Kyung Ki Province’s Intangible Cultural Asset #34) expresses a woman’s anguish and adversity. It was captivating to watch the masterful Mi Sook Song in her sustained and unhurried turns, moving through the meshes of light cutting through the space: it was like watching her dance through webs of silk. Her floor work with closed eyes and hands in prayer position evoked and sharedKorean spirituality with a Canadian audience.

I especially enjoyed Ichiro Oikado’s performance of Kappa – a celebratory mask dance based on traditional Japanese movements and spirituality. His white powdered face was covered by a red lion dance mask with thick yellow cords of hair tumbling down the side, surrounding his blue scalp within a ring of hair. He embodied the quick snaps of a wild playful animal, sticking out his tongue, crossing his eyes and pulling his upper lip over the bottom one. Oikado’s clown and magician resembled a rag doll straight from the fields of rural Japan. With an earthy “huh!” he changed his mask in one swift movement and transformed himself into a female character. In surprise after surprise, the white “hair” of the mask detached and became two long ribbons with which he created patterns in the air after producing fluid movements with a red fan that appeared out of nowhere.

These traditional expressions of meditative patience from an art form steeped in centuries of wisdom and shamanistic spirituality were beautiful. However, they were interrupted and diminished by some poor lighting and video projection choices throughout the show. The flashy strobe-like lighting changed colours, in some cases, literally every other beat, taking the focus away from the artists’ manoeuvres. Some scenes on the scrim resembled music visualizations or slide shows. There was even copyright watermark on one image. The unmatched and distracting lighting did a disservice to the local and international performing artists. Mi Young Kim, the artistic director and choreographer of the Soo Ryu Dance Festival, appeared against a projection of natural maple leaves during the final bows dressed symbolically in a traditional Korean hanbok and white high heels with the archetypal Korean pointy dance shoe toe. The work she contributes to building bridges between Korean and Canadian culture through dance came to fruition once again in Soo Ryu Dance Festival 2012. A second performance night took place on November 6th at the P.C. Ho Theatre featuring a similar program. The festival concluded on November 7th with workshops on various Korean and Japanese dance techniques at Canada’s National Ballet School. 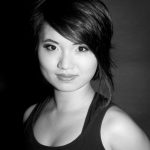 By Jennifer Ip
Read more by this author