The Menaka Thakkar Dance Company’s presentation of “Sitayana — Sita’s Story” from May 12-15, 2005 at the Betty Oliphant Theatre, Toronto, was a virtuoso production of a dance drama in the bharatanatyam style.

Originally staged by Thakkar in 1994, the work is a retelling of the Indian epic the “Ramayana (Rama’s Story)” from the point of view of Sita (Rama’s wife.) Thakkar first explored this feminist viewpoint in her 1977 work “Sita Swayamvaram (Sita’s wedding)”. Not satisfied to present only a glimpse into the first phase of Sita’s life, Thakkar continued to develop her dance drama to present five important episodes of this heroines’ life.

Thakkar’s use of dance and theatrical technique to present a contemporary feminist perspective on this iconic Hindu epic has often been seen as the primary impact of this work. I would say that the 2005 remount stands on its own as a choreographic and performance tour de force.

Thakkar herself along with fifteen first and second soloists are joined on stage by a corps of over fifteen dancers and a handful of actors in the realization of the work. Speaking specifically to their execution of bharatanatyam technique, the dancers are at the top of their form. Their delivery of complex rhythmic footwork was clear and precise and their understanding of the music was evident. Furthermore, as character dancers, all members of the ensemble were completely engaged in their roles, ranging from Sita’s friends to demonesses and forest animals. Surely the highest compliment one can pay to these dancers is to say that they are good enough to share the stage with Thakkar — and they are. Sukaneya Subramaniam and Shantini Kangesan stand out, as does Bhavika Patel in her portrayal of the child Sita.

What can one say about sixty-four-year-old Thakkar portraying the young Sita? She moves her right hand in the gesture of a veil, and her entire body becomes that of an entirely believable sixteen-year-old Sita, smitten by her first glimpse of Rama. With economic use of bharatanatyam’s gestural vocabulary, Thakkar continues through the stages of Sita’s journey as a bride, sacrificing wife, defiantly captive victim and finally a proud and virtuous woman who is maligned by popular opinion. Thakkar’s face provides a window into the complexities of Sita’s life, and her powerful eyes radiate emotions, from an overwhelming love to a fierce anger that seems to stop just short of igniting the stage with flames. Thakkar does not confine herself to the technique of abhinaya (the art of expression), however. The entire first act is packed with awe-inspiring dance sequences. I’ve been watching Thakkar dance for over thirty years, and her ability to constantly push her level of performance truly seems to have no end in sight.

Superlatives about the performance aside, it is the stunning choreography of both acts that excited me the most. Thakkar’s choreography is a consummate expression of the bharatanatyam form and much more. Her unique juxtapositions of adavus (steps), sparkling jethis (groups of steps), intricate thirmanams (sequences of jethis) and grandly executed aridis (endings of rhythmic phrases) are mind boggling even to someone who has spent years studying the form. Also evident in this production are the results of Thakkar’s years of investigation into other forms of dance (and the ongoing training she has provided for her dancers in a diversity of techniques). Subtly woven into her deconstruction of classic bharatanatyam adavus are gestures and physicality drawn from the dance forms kathakali and mohiniattam, as well as the matrial art kallari payathu. These moments of fusion are entirely organic, enhancing the mood and intent of the work without seeming the least bit obvious.

The theatrical elements of the production, which were interspersed throughout by various actors in speaking parts, could have used a healthy dose of dramaturgy, and some judicious editing would have served the overall presentation well. The scene involving the conversion of the demoness Trijata, and her subsequent engaging of Rama in explorations of deep moral issues, was at times heavy handed and oversimplified. However, there is no doubt that the English text assisted greatly in sustaining the narrative flow for a diverse audience.

In creating her dance drama, Thakkar referenced the original “Valmiki Ramayana, as well as the “Ananda Ramayana” of the sixteenth century. As noted in the program, there have been many versions written since, which reflect the sensibilities and values of their own times. The common ground in all cases is the glorification of Rama. According to Thakkar, it was only by going back to the original sources that she uncovered the most open, honest and even refreshingly modern charactizations of Rama, Sita and the others. In the process, she discovered that the voice of Valmiki — creating a poem without an agenda — blends surprisingly well with our own contemporary times.

Thakkar has created a rich dance drama that unabashedly raises moral concerns, presents a woman that audiences of today can relate to, and provides pure dance enjoyment as well. I trust that this work will remain in the company’s repertoire, and I hope that some tangible documentation of “Sitayana” is created so that the vital significance of a great Canadian dance work is not lost with time. 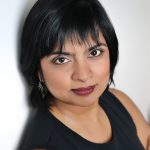 By Nova Bhattacharya
Read more by this author