The person sitting in front of me at the opening day performance of Cas Public’s new work, 9, brought a bear to the theatre. It sat quietly on her lap and did not seem out of place, as she was no older than ten, and the bear was stuffed.

Here is the defining feature of 9: that it was designed for kids, and yet it does not prevent itself from striving to be a thought-provoking work of contemporary dance. Choreographer Hélène Blackburn doesn’t pitch the show one way and then reach back — neither nodding to the adults, as in a Disney movie, nor shaving off the edges to catch a wider demographic, like in a thriller — but rather strikes a balance by appealing directly to young and old at once, equally.

It’s a difficult feat, but Blackburn is helped by her material, which is broadly accessible and emotionally engaging. At the centre of 9 is Cai Glover, a hearing-impaired dancer, who draws us into his world by removing his hearing device in the opening movement. This gesture launches us into an alternate reality that is at first muffled and disorienting, then progressively more assertive, and finally arriving at a place of defiance and celebration.

9 takes its name from Beethoven’s Ninth Symphony, which he famously composed after losing his hearing. The audio design matches the crescendo structure of the work. It starts with the sound of delirious plunking on a toy piano and rises to its full symphonic heights by the end. This progress is assisted by a male singer who wanders the stage producing a gorgeous, uncanny falsetto. It is a wonderfully piercing sound, which seems to arrive from far away, and adds immensely to the otherworldly mood the show works to create.

The choreography in 9 is often inspired by the syncopated allegro of sign language. I’ve always wanted to see this evocative connection explored — between the literal meaning of sign language and the intuitive suggestions of gestural language. Blackburn appropriately chooses movements that are muscular and balletic, and the dancers intersperse long energetic sequences with easily intelligible signals: shushing, pointing, winking, smoothing their hair. These punctuation marks don’t communicate much in the way of content, but they do create a feeling of complicity between the audience and performers.

9 has a young protagonist who we meet in a series of videos projected on a screen above the stage and spliced throughout the performance: a boy of maybe ten or twelve, who wears the same hearing device as Glover. We encounter him in various postures of estrangement from his peers, and apparently trapped inside a universe of his own devising. As the performance advances, the young hero, whether in frustration or raw self-assertion, yells repeatedly into the camera — sometimes audibly, sometimes not. Unfortunately, the aesthetics of the video don’t jibe with the atmosphere of the dance performance; the former looks like the manual setting on an old digital camcorder, while the latter is a heavy chiaroscuro. In the end, the video is an unnecessary and unhelpful extra layer.

9 relies heavily on props, especially small white chairs. The stage is littered with them: some small enough for a child to sit on, some better suited for a teddy bear, and some sized for a human hand, or a precious object, like a hearing aid. The performers actually invite children in the audience to join them onstage throughout the show, to sit on the chairs and face the audience; it is enjoyable to face off with these stunned viewers as they experience being viewed. Apart from that, the dancers continually rearrange the chairs, as if there were an important meaning to be found in this activity, although I never discovered it.

Many elements of this work, such as the video and use of props, felt jumbled to me. There’s much to enjoy and admire in 9, like its expressive weaving of sign language with ballet and contemporary dance techniques, its forthright style of audience engagement and the way the dancers embody a tension between unruliness and precision. But these strengths were overwhelmed by a confusing pile-on of signifiers. For example, there’s a small toy car that drives around onstage through much of the show and is equipped with a camera that is sometimes livestreamed on the screen above the stage. Cool effect, but why?

Even though Blackburn strives for multi-generational appeal, I suspect that the most satisfying and interesting way to watch 9 is from the perspective of someone who is, let’s say, nine (your inner nine-year-old will do fine). 9 is rich with emotional urgency, unfettered athleticism, palpable sexuality and the sort of earnest charisma that strong young professional dancers often possess. It would have been an enormous gift to attend such a performance back then, and with that lens, it is easy to shed the intellectual frustration and find the sincere thrills in 9. 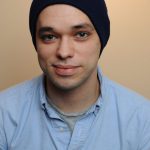