Wild horses couldn’t drag us away from the world premiere of Sable Island, the first full-length production by Halifax’s Mocean Dance since 2010. Choreographed by Serge Bennathan, one of Canada’s most distinctive voices in dance, who immigrated from France in 1985, Sable Island is deeply emotional, untamable and an elemental dance performance.  As the contemporary dance bill promised, Close Reach, an evening sail of dance, theatre and music featured Sable Island and Live from the Flash Pan. Performed at the Alderney Landing Theatre in Dartmouth, N.S., from April 30 to May 2, it was true to nautical form.

Opening Mocean Dance’s evening was a remount of 2010’s Live from the Flash Pan, choreographed by Cory Bowles and performed by Dora Award-nominated dancer Rhonda Baker, a resilient and expressive performer, who is captivating and unruly on stage.

Baker reacts to four songs as if she were performing physical karaoke, or some form of drag. The soundtrack to her satirical performance was “Barakaat (the blessing)” by Abdullah Ibrahim, “The Wait” by The Pretenders, “Punk” by Gorillaz and “Life in a Glass House” by Radiohead. While she flung her wild red hair about the stage, it was her subtle and more intentional movements that deeply translated. Baker graduated from the School of Toronto Dance Theatre (STDT) and travelled to Israel to study the Gaga Movement Language, but her work in improvisation truly shone in Sable Island.

Sable Island National Park Reserve is a small island 300 kilometres from Halifax which is managed and protected by Parks Canada. With merely a handful of year-round residents, summer brings academics, scientists, artists and tourists. It’s the Sable Island ponies, a herd of wild, feral horses that enchant. Stocky and short, Sable Island horses are mostly shaggy-haired and chestnut coloured, palomino or black.

Part myth, part mysticism, Sable Island (the performance) tapped into the mystery and fierce spirit of that small strip of land off the coast. Mocean Dance’s production was pure physical poetry, all intention, artful silence and emotional roar.

Dancers Baker, Jacinte Armstrong, Susanne Chui, Sara Coffin and Gillian Seaward-Boone made for extraordinary wild horses. Every dancer a vision, with a wildness that intoxicated as their bodies took on formations of the wind and ocean and stampeded the stage with grace and intuition.

Armstrong is a Halifax-based dancer, who trained at Halifax Dance before studying at the New World School of the Arts in Miami. Currently, she is the artistic director of Kinetic Studio. Mocean Dance’s Artistic Director Chui moved with fluidity. She also studied at STDT and was a founding member of Tilt: sound + motion dance company. Coffin recently completed her MFA in choreography at Smith College in Northampton, Mass., and has many awards to her name, including the Gretchen Moran Teaching Fellowship from Dalhousie University (2004), the Iris Garland Emerging Choreographer Award (2009) and the British Columbia Emerging Dance Award (2005). Her choreographic work has been presented nationally at many festivals. Seaward-Boone is a director at Halifax Dance and faculty member, as well as a graduate of LADMMI: l’Ecole de Danse Contemporaine de Montréal (2006), and has toured extensively as a company member throughout Europe, Asia and North and South America with O Vertigo Dance.

The music, composed and performed by Québec composer Bertrand Chénier, transformed the theatre into a windswept island, ocean floor and rocky shoreline with piano, bass, and mandolin.

Choreographer Bennathan drew on the savage sweetness of Sable Island’s wild horses. He managed to create the physical embodiment of the island and its billowing isolation. Mocean Dance’s Sable Island is spellbinding. One moment the herd of dancers clamours together, a cacophonous harmony, and the next they are running about the stage in circles, sometimes one tripping over the other, or climbing the theatre’s imagined steep cliffs.

Lighting designer Stephane Menigot creates visual poetry as each mood is illuminated. Both gutting and inspired, she makes stunning use of light as a narrative tool to capture a whirlwind of emotions and internal shifts.

Sable Island is deeply metaphorical as the stage is sparse, and all actions of movement, wind, weather and animalistic qualities are rooted in the dance. It’s not literal in nature, yet rings true. The struggle to survive is a vein running throughout the production, as each dancer endures an emotional undercurrent, much like the capricious horses themselves.~ 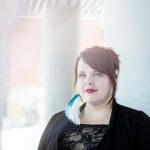 By Shannon Webb-Campbell
Read more by this author