“I relax my focus and let the body take over. When you’ve spent a lifetime holding back in one area, surely it’s holding other areas back. How does a lifetime of hiding affect how we connect to others?” – Dana Michel

Dana Michel’s latest serving challenges us to reach into our imaginations to create our own intimate vocabularies while sitting with the work. CUTLASS SPRING could be viewed as the “final” act of a trilogy that began with Yellow Towel and Mercurial George. Yellow Towel is an execution of a circuit of movements that follow a grid with strewn “meaningful” objects appearing across the stage as though there had been an implosion of the bits and parts of “a life” and “character,” reminiscent of a New York street dweller’s selling street wares for mere survival. The yellow towel in question represents the measurable perceived aesthetic capital of blond hair. Mercurial George picks up where Yellow Towel ends, delving into a disheveled, deranged character’s world. Now, with CUTLASS SPRING, any trace of “things,” — human or resembling characters — or necessarily essential are sublimated from view.

If previous pieces might have shared resonance with the visual works of artists like Ida Buchman, Sister Gertrude Morgan or Arthur Bispo do Rosário, now with CUTLASS SPRING we enter into a realm of even more radical alterity that might correspond with the visual registers of artists like Mary T. Smith, Koenraad Tinel, Miriam Cahn or Joseph Beuy’s abstract sculptures. Michel is not necessarily leaving behind the subject/subjects but rather making it and them less effusive — simultaneously more bulbous and held in; rubbing against disproportionality; more amorphous rubbing with a strictly delineated locus. Further views of the crudely hunched entity of her previous work spiral into endless declinations of what it might mean for something or someone to be broken.

Also newly present in her work is the advance of a monochrome silhouette following another reverse negative image of itself, intimating the increasing solitudinous shadow lives of our present times. Above all, we witness the multiplication of optics from which to regard subjectivity and her continual advent of the consideration of something beyond subjectivity. In CUTLASS SPRING everything is stripped of its essentiality; all is rudimentary and laid with nodes we might be at a loss to place. But ultimately, across the variegated ruptures of its story and absence of story there is an interest in something “more than human.”

Unlike her past works, in which continuous juts of resistance mix with fits of sublime failure painting the white box, we are now in a realm of total submission and complete exhaustion — a realm of a total letting go to allow what may come to come. If in previous pieces there had been a constant switch between stillness and frenzy, now we seem to be witnessing a lair of a necessary monotonous nothing, which almost amounts to something and that no sooner renders itself into a hallowed nothing that we cannot stop watching, listening to and inhaling. Examples of the such are Michel’s mischievous exits offstage into a nether place where we are blind to her character’s funny movements that we nevertheless hear via a mic. Waiting for her to return to the white box feels like an interminable torture.

We feel devoutly concerned. We ask ourselves: “Where has she gone? What is she doing that we can hear but not see? Is she hurting herself? Is she laughing at us?” Our patience is tried and our emotions swell into an internal high. We are never relieved or at ease again.

Michel has the uncanny ability to entrance and entangle us inside pure affect — to unceremoniously evict us into our own corporeality. This body or “thing” challenges us to focus on what this body is or what this “body” could possibly be. When she reappears, we feel a sense of relief that “she” is safe and that the show will go on. But Michel’s departure from the white box instills a deep sense of loss and empathy. The constant switch between repugnance and warmth we are watching endows us with a discomfit coloured with both a quiet feeling of contentment and a quiet feeling of terror all at once. We become torn inside with the deep insecurity of not understanding anything we are watching.

These are the shoulders of a licentious woman; a Black woman; the shoulders of a hubristic filled macho lumberjack; the straitjacket of a briefcase carrying leather clad being; the slicker of an anthropomorphic falcon-headed Horus; a state metamorphized from one into another and another and another. These vigilant and stilted entities move both with and against the grain. If her first two works explored what was onstage, who was onstage and what we are seeing onstage, CUTLASS SPRING seems to delve totally into us watching ourselves watching what is on the stage.

“There’s no artifice,” remarked Yoan Sorin, a friend and collaborator of Michel’s in a conversation we had about Michel. “Dana is completely herself on these moments; she’s transparent. … She finds what I find essential in art — the question of sincerity.” When watching her we ask ourselves if this being’s purpose might be to somehow act out or mimic pure torsion, pure matter, pure sexual energy. CUTLASS SPRING seems interested in exploring how one might dance in the role of pure schematic expressions of such states of being — torsion, matter, sex. Michel might be asking, “How can we represent the strophes and glyphs of sex and desire as untethered from human conductors?” Represented onstage are just energies and emotions separated from their human actors. Ultimately, are we not watching a representation of pure affect; it’s affect portrayed through the lens of the most radical . We feel that there is something terribly wrong here, and then paradoxically at once we feel motes of elation. CUTLASS SPRING is both darker, sexier and lonelier than Michel’s past works.

And after all of this, a final sequence harkens a sense of a concentrated eternity. Michel stands akimbo; she rocks and rolls while steadying a mysterious triangular contraption that resembles the ropes of a sailing vessel. Here, in Michel’s remarkable finale, we see a glimpse of not “hope,” but rather after having witnessed a torrid hour of jilts, juts, effusive cruciform positionings, fits of exasperating discomfit, slow dances, slips and slides and failed architectural plans, we finally see the arresting final “image” of an architectural and sculptural surprise. As she finally belays the rope completely, it raises from underneath an unsuspecting sheet a structure that resembles something of a makeshift house or perhaps a sanctuary for an exhausted being. What is revealed in this final image is the evocation of a dwelling, not a home. Is it to the critical question of dwelling where Michel had been bringing us all along? Martin Heidegger has suggested in its most rudimentary function the “character of dwelling is this sparing and preserving.”

“What is it to dwell?” What might happen if we were to move from questions of building something to understanding something? Must we build things to be able to dwell? How do we, should we and can we dwell? After watching Michel, an approach coated with a radical sense of sincerity might be a foundational place from which to even begin to dwell in these questions. 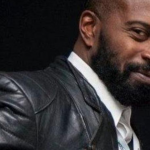