Truthteller is an interactive presentation engaging with performance economies, rituals and intimacies between bodies.

Upon entrance, the audience is given green swaths of cloth. Each one has two eyeholes cut — a green ghost costume. We are invited to don the outfit and take a place in the room (it took place in a rehearsal space, not a theatre). Then we would be trees (in “forest drag”). A rendition of Madonna’s Like a Prayer is playing and, I have to admit, the effect is moving, even if it doesn’t make much sense. It’s difficult to see out from the eyeholes, and many of us are naturally swaying, side to side with the song. But it’s hot, and eventually many of us drape ourselves in the cloth in different ways, freeing our faces. It doesn’t matter: the costumes have already transported us to the ritual space of “Performance.”

A recorded voice tells us to orient ourselves to the north, east, south or west walls, in accordance with our tolerance or desire to be touched. I push myself out of my comfort zone and pick the middle-high range and am later glad I did.

Nicols has an uncanny ability to be funny while serious, to ask for consent while taking liberties, and none of it feels too far. She’s so comfortable with strangers and strangeness that nothing feels too uncomfortable. Beginning at the wall for those who wanted the highest degree of touching, she begins to climb on and over the audience, all while having close conversations. She slithers — awkward, agile, acrobatic. All the while, Nicols’ eyes are closed. Instead, she has open eyes painted on her lids and a seer’s third eye on her baseball cap. I’m on the next wall, and we have a tender slow dance while she hums Celine Dion’s My Heart Will Go On. It’s a junior high experience I never had (being too cool for school at that age), and a feeling of implanted nostalgia washes over me.

Many of the exchanges are intricate and comical. At one moment, she makes contact with the photographer of the show and they have a snuggle. He looks slightly awkward then snaps an image of her lying on his lap. The timing is perfect.

She talks us through the next steps: “Now I’m going to get in the lake” — a kiddie pool “in drag” with sequined blue fabric inside. We are invited (there are a lot of invitations) to pour glasses of water over her: a ritual bathing bringing us full circle to Like a Prayer. It’s a ritual offering — like lighting a candle for the Virgin Mary. “Lady Janitor” (Madeleine Shen) pulls out a ladder and rains down large pieces of gold glitter over her wet body for what seems like an eternity. Instead of being boring, it feels like medicine. The glitter sticks to her wet body, to us, and makes a lake of molten gilt. If gold were dollar bills, this is what it would look like.

Other things happen; the same song is played by many phones in the room while Nicols dances, holding crystals. It’s a new-age move without embarrassment. Or is it sarcastic? It’s both. There’s a break when she lies down and invites those who want to in for a snuggle. A “scroll” is unrolled — a roll of paper detailing the monetary exchanges that went into the show reveals, unsurprisingly, that being a performer is not a lucrative endeavour. I recognize names but, more importantly, I identify the generosity of those donating their time and resources to the work.

To end we are invited to stand and sing Like a Prayer together. We step-together-step-touch and sway along. It could feel forced and corny, but it feels like cleansing, as I imagine a ritual should. It’s not corny; it’s communal. 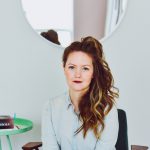