Québec City-based choreographer Karine Ledoyen is an emblematic figure of the contemporary dance scene in La Belle Province’s capital. An inspirational character for up-and-coming artists who seems to never run out of creative ideas, she’s presented a multitude of ambitious multidisciplinary spectacles to date and collaborated with many theatre artisans, which has resulted in outstanding projects such as Danse de garçons. Fans and local art enthusiasts have been waiting for her comeback after a three-year hiatus, a pause Ledoyen took to explore new themes at Laval University as part of a master’s degree in literature.

The ever-evolving artist now teams up with Odile-Amélie Peters (recently featured in this minimalistic Ghostly Kisses music video), her long-time contributor Fabien Piché and musician Patrick Saint-Denis who also worked with her on Trois paysages in 2012. Danse de nuit, presented by La Rotonde, looks at nightlife and sentimental wounds.

The work starts with the choreographer herself. Ledoyen appears wearing a disco queen outfit of sorts, moving her arms subtly as seemingly random ear-splitting sound fills the space. Her series of simple arm movements leads into the appearance of Peters and Piché armed with inflatable mattresses. The scene now weirdly evokes imagery from camping or a teenage sleepover. That is, until the trio begins to playfully perform non-subtle sexual intercourse simulation, a juvenile yet ecstatic vision of sex surrounded by a soundscape of coital noises and techno music. The tableau is a departure from the more traditionally choreographed work of Ledoyen’s to date.

Quite suddenly, Ledoyen moves to bring out a lo-fi camera to look inquisitively at the dancers — more precisely, on Peters’ derriere. At this stage, Peters is trying to carry her sleepy (we assume drunk) boyfriend, Piché, on the kitschy white cubes that have been waiting at the front of the stage. By filming the performers, Ledoyen as stage director effectively explores voyeurism. The feeling is of deep malaise. It’s uncomfortable and yet admittedly enjoyable to take in this couple’s pornographic encounter.

Without rhyme or reason, the scene abruptly stops and Ledoyen moves us on. This time, she takes off her mask, breaking the momentum, and begins to share her creative vision as if her Q & A had begun forty minutes ago. She formally introduces how she’s been manipulating and contributing to the live sound: with a heart monitor watch.

As the dancers return and start moving again, we briefly experience a very intimate connection. Piché and Peters finally start to really dance, as if to showcase their faultless technique and physical strength. The exchange was a long and crooked embrace punctuated with vaporous lifts, a push-and-pull game that easily referred to modern era dating. Peters ends up channelling her own Guildo Griffin (founder of the breakdance school Studio Party Time), exploring her own hip hop inspired vocabulary and accomplishing an impressive breakdance head spin.

Another scene break comes near the end of the show as Ledoyen becomes a grotesque, Gob Squad-esque version of herself to get into a funny selfie session. She depicts the majority of us, hungry for attention through social media. This part, a representation of the so-called “likes culture,” is one of the most powerful of the show. It’s a metaphor for digital loneliness.

Unquestionably discursive, Danse de nuit undergoes another lull as Peters jumps onto a pile of cushions as though she were the princess in The Princess and the Pea. The numerous layers of giant pillows are watched intensely by musician Saint-Denis as he performs a rave-like score. The cavernous noises produced by Saint-Denis were hard to bear, but they matched Peters’ drowning in cushy fabric. The result was an emotive, well-executed solo for a heartbroken, unsteady woman, longing for recovery after a painful split-up. The scene is a nightmare likely many people can relate to. It gets at a level of profound psychological distress that Ledoyen ultimately plays down with humour, frostily narrating her own cynical “amorous duo” with a bunch of deflated mattresses as Peters rolls off the stage.

Danse de nuit is an analogy for dismantling relationships, the sadness that occurs throughout and after a breakup. It gets at the crazy stuff we do as we attempt to heal ourselves. In hindsight, watching this work is, well, pretty therapeutic. 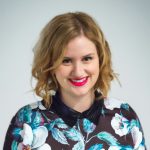 By Catherine Genest
Read more by this author