Cowboys and superheroes; glam, a wagon and a lot of fans; straight up contemporary dance. “inherencies and other disorders” was, as the title might suggest, a varied evening of choreographic studies on nature versus nurture by choreographer, dancer and director Darryl Tracy. Presented at the Winchester Street Theatre in Toronto, the performance I watched was well attended. I sensed a collective engagement from the audience that endured over the evening, with many people sitting forward in their seats and audibly enjoying the experience. Tracy took on the ever-daunting task of self-producing the evening. He also danced in two of the works and choreographed the other two.

The theatre is a semi-blackbox space, so the stage is open to the audience as we settle in. The black upstage curtains are drawn a third of the way in from each side, leaving in view the architectural detail of a pillared arch and white wall (the building was originally a church). “Casa 1: faraway we walk closely” – the first work of the evening – is a trio for three women: Heather Berry, Tina Fushell and Ceinwen Gobert. As the dancers edge into the space, they effectively stand out in relief against the black curtains and white wall. Choreographed by Tracy, “Casa 1” is section one of a two-part choreography that bookends the evening. The three dancers are clothed in dark, everyday jersey dresses, hair down and flying throughout the work. Pulsing, moody electronic music by Pantha du Prince and Pakku drives the dancers in a relentless circling, pushing, pulling journey up and down and around the stage as they are highlighted with strategic squares and circles of light (lighting for the whole show was designed by Simon Rossiter). The work is technically demanding, with precision kicking and placement of feet and limbs on the floor and in space. Eyes seem significant: the dancers look to and through each other, tangled yet separate. Through the different possibilities of a trio – two against one, one breaking away from three, a solo and a duet becoming three, etc., – a kaleidoscopic image unfolds of women travelling alongside one another, together yet alone.

A duet by Lesandra Dodson for Rick Brown and Tracy came next, titled “In 2 days a man can change.” The black upstage curtains are fully closed across the back of the stage and the two men stand side by side, also clothed in black, pearly buttons done right up to their chins. A film image of a barren desert landscape is projected beyond the dancers’ heads. Dodson’s trademark dense, gestural choreography seems more distilled here, no less intense, but not as busy as I’ve seen in the past. The dancing is up and then down in a flash, fast with moments of loaded stillness. Both men are in their performing prime, comfortable in their dancers’ bodies and brimming with character. It was incredibly satisfying to watch them navigate this often funny, fraught dance. Speaking bits of text from “The Complete Western Stories of Elmore Leonard” about nemeses, twins, super-powers, physical prowess, annihilation and so on, the choreography pits Brown and Tracy against each other as they verbally and physically bait one another, their characters morally disparate. Christine Fellows composed a score that conjures tumbleweed, cacti, dusty duels and vendettas. Near the end, Brown and Tracy both don exaggerated fake noses and strut around the stage, picking up moustaches, which they apply (predictably) under those noses, and then (hilariously, randomly) over their faces like cowboy Picassos. The dance finishes with our protagonists still standing, no clear hero or villain, and a desert sunset film.

After intermission we witness Tracy in a solo by Keith Cole, Toronto’s cabaret king/drag queen/mayoral candidate. “Dodged Bullets / Missed Opportunities” opens with a bunch of fans upstage right – standing fans, medium fans, small fans, stationary fans and oscillating fans. A muscled young man enters, clad only in a pair of pants, and proceeds to turn on some of the fans. He then settles himself into a child’s red wagon and keeps his attention trained into the mid-distance or on the fans; he is distinctly part of the set. Tracy enters in a glammy outfit: white, tasseled top with silver sequins, silver short-shorts and a sequined knee pad. Program notes for “Dodged Bullets / Missed Opportunities” say that the piece is about being falsely accused and accusations true, false, real and imagined. I’m not sure I read that specificity in the work, but it was certainly entertaining. Tracy’s character seemed simultaneously comfortable and uncomfortable, apologetic and not. The boy in the wagon lent a somewhat creepy element to the work, as a living set; neither he nor Tracy ever acknowledged one another’s presence. Tracy spent a lot of the dance strutting and stalking across the available stage space, occasionally undulating, bouncing his shoulders, slapping his thighs, grabbing his crotch and circling his hips and wrists, go-go style. When he was standing in front of the fans, the effect was not as windy as I expected and I wished I were closer to the work so I could feel the breeze.

Lastly, we returned to the original set, with partial curtains and white arch. Tracy’s “Casa 2: proximal,” the second section of his “Casa” work, is a quartet made up of two male duets. Four young men danced with ease and comfort inside Tracy’s technical and specific choreography. Paul Charbonneau and Simon Renaud made the first duet while Laurence Ramsay and Riley Sims were the second pair. All four dancers are markedly alike physically, of similar heights and builds, which lent an odd air of déjà-vu to both pairs as they danced. They were well matched for strength and skill. The four performers were all onstage for the whole work, but dancing in their distinct duets with the other pair moving minimally, providing a shadow or a backdrop to the dominant duet. The dancing is close, intimate, tender, tense. With no obvious through-line, the duets are an abstract meditation on closeness, real and fictional, physical and mental. Squares and rectangles of light contain and push the dancers across the stage, as they leap, roll and balance in and out of one another’s embraces. The lights, along with an electronic score by Pantha du Prince, Pan Sonic and Robert Henke, give the work a relationship to the first section, “Casa 1.” Sequences of complicated arm gestures weave snake-like around and through the dancers, drawing them around themselves and their partners. Striking moments: a man kneels on his partner’s chest and then stands on his pelvic bones; an elbow to the back, like a slow, standing pile drive; partnering in a push-up – a pas de deux on the floor. The movement is erotic, delicate yet dominate, vulnerable for both dancers, memorable. I see the duets travel through conflict to resolution giving way to face off, contemplating, accepting, following, rejecting: arcs of relationships and their patterns, predictable yet surprising.

Tracy is a physiotherapist as well as a dancer. In his choreography and dancing I see a deep consciousness and attention to all the parts of body, skin, muscle, bone, connective tissue, blood and guts. In his performances, the emotional becomes another facet of the physical. I left “inherencies and other disorders” feeling full, having enjoyed a smorgasbord of thoughtful, funny, touching and very physical contemporary dance. The poster for the event is still clear in my mind after seeing it on boards and poles around town: a collaged cowboy with classic hat and handlebar moustache topping a man’s torso and arms with a band around the chest, a womanly pelvis, thighs from different owners, a dancerly, pointed left foot on the right leg and a cowboy-booted left foot. In retrospect, the poster was apropos of the evening, a patchwork cowboy, more dimensional, bizarre and fabulous for his collective parts. 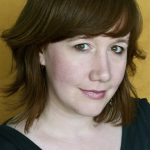