Prairie Dance Circuit has become a highly anticipated annual event on the Prairies, featuring dance and other media artists from Western Canada on a tour across the plains to Edmonton, Calgary and Winnipeg. In his opening remarks Brian Webb, artistic director of the Brian Webb Dance Company, which presented the Edmonton production of the Prairie Dance Circuit, praised the bravery of all the performers and artists who have chosen to forge a path in contemporary dance. A bravery the audience at the Timms Centre was happy to recognize with audibly held breath, participation when called upon and great applause at the end of this triptych of performances.

The opening piece, Laissez-Faire, was commissioned by Edmonton-based dancer Ainsley Hillyard and was a collaboration with intermedia artist Freya Björg Olafson from Winnipeg, who blends audio and video with her background in classical ballet and contemporary dance. The work leans on Hillyard’s charisma and theatrical skills as much as her physical performance to explore the question: What has dance become in the age of the internet? Is it now just about executing a series of sick moves for instant gratification?

Laissez-Faire begins in a room built of three connected screens, all glowing with bright, solid light as Hillyard sits facing them, limp in her entrancement of the brightness and the online world they represent. Electronic music pulses in the background as she eventually rises from her chair, her every movement robotic and rehearsed as she begins a monologue about dance and movement stereotypes associated with genres. Striking a series of poses straight from any club’s dance floor she says, “Don’t worry. They think it’s hip hop.” Hillyard’s command of speech with her performance is perfect.

The climax of Laissez-Faire takes a turn towards full audience participation with an aerobics-style dance class. But the humour takes on a sinister tone as practice ends and performance begins: the music is almost drowned out by a voice counting unevenly and hysterically while another rising voice questions every movement, every choice. Finally, defeated by the voices of self-doubt, Hillyard collapses in her chair, staring into the now alarmingly red screens that surround her. The round of applause at the end rouses the performance beast Hillyard has been embodying, and the curtsies become a performance in and of themselves until the curtain finally drops.

The second work was by Calgary’s Helen Husak and called Mise en Abyme featuring Edmonton-based dancer Kate Stashko. The bright screens from the previous work disappeared to feature one single light highlighting Stashko, clothed in robes and a hood covering her face — the light cast eerie shadows on the curtains that made up the sides of the stage. Stashko moves continuously from one side of the stage to the other, trapped in an exploration of infinity and confinement. Electronic music continues to pulse, eventually becoming so droning that what we hear is less a sound and more a ringing in the ears. When she stops, it’s to lift her hood just above her mouth and perform a silent scream.

Each time Stashko changes a pattern in the repeating phrase, she becomes trapped in the endless momentum of that movement, running in circles. When the light begins to move, she becomes erratic, a moth searching for a flame. Stashko’s athleticism in this relentless performance is absolutely compelling, and when she finally stops, when the entrapment is over, it’s a relief to finally exhale along with her.

The third and final piece on the evening’s program was Stasis, performed and choreographed by Husak. The work starts with a literal bang as a single spotlight falls on Husak’s body laying centre stage in a fetal position, trembling. A large screen behind her and several smaller ones at the edges of the stage flicker to life creating a single, giant image of the ocean floor, water funnelling towards a dark eye. Husak slowly rises, every inch of her vibrating — her legs, her back, her arms — like a creature from the sea who is acclimatizing to being on land, making an effort to stand on new legs for the first time. Once up, she evolves, exploring the world around her, racing between the same swirling image on the screens, but now on stronger legs. She becomes a refined and aggressive predator — all power and grace. After these exploratory phrases of movement, the predator falls away and Husak’s heart fills the auditorium as she dances tall and light on her feet. She reaches for a sky we cannot see, extends in long lines of yearning to the delicate sounds of piano until this elegant, delicate persona is pulled down to the floor once again, weighted by the complexities humanity has bestowed upon on her. The screens now show an aerial view of a forest, drawing ever-closer to a central point. A swath of dark earth appears, and a small, white point reveals a woman lying in a fetal position, trembling in the dirt, as though ready to begin this cycle all over again. 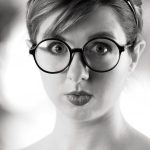