Editor’s note: this text has been changed. The words, “Chinese pop song” have been changed to “song by Japanese musician Susumu Hirasawa”.

The future is foggy — at least, the future as envisioned by Vancouver-based interdisciplinary company Hong Kong Exile. Or is it smog? Either way, the semi-blindness and sound of audience members periodically coughing from the vanilla-scented haze creates a disturbing visceral environment. Room 2048, which opened at the Firehall Arts Centre in Vancouver on April 11, created by Hong Kong Exile, Michelle Lui and Alex Tam, performed by Lui, Tam and Milton Lim, fuses dance and theatre to create a disorienting world.

In recent years Vancouver has been host to a number of future-looking works. At the time of Room 2048’s premiere, I counted more than three shows with similar themes, including Boca del Lupo’s Genetic Drift, a play imagining climate change 150 years from now, and Nebula Theatre’s Generation Post Script where humanity survives on space stations. What makes Vancouver a particularly welcome host to future narratives? On the edge of the formidable Rocky Mountains, squeezed between the ocean and major fault lines and coming from an ethnically diverse population, Vancouverites are well aware of the precariousness of place and identity and possibly prone to imaginings about the future.

Hong Kong Exile’s founders, Natalie Tin Yin Gan, Remy Siu and Milton Lim, met while attending Simon Fraser University’s School for the Contemporary Arts in Vancouver. The collective’s past works have often tackled issues of cultural politics and globalization. Room 2048, however, uses a personal lens to explore issues of identity. As a result, what stands out in this work is the distinct feeling of catharsis. Except for one significant dance solo by Lui (a kind of off-kilter, angular explosion), most of the movement is a kind of shaking, as if the dancers are trying to expulse something, as if their bodies were releasing trauma. Though the specifics of that trauma remain undefined, the performers clearly seek relief from something — perhaps it is confusion itself that they want to be expelled. In this work the process of release is more important than identifying what is being let go.

In the fog, a thin runway of light appears from two projectors mounted overhead, resembling spy cameras. Lui stands in the centre of the light, turning in the dark as the lights black out, then reappearing in another position, like an image flickering on a screen. The lighting becomes a significant character in this work (indeed lighting designer Remy Siu is listed as a performer in the program). At times, the choreography cooperates with the projectors by confining the performers to small boxes of light and, at others, they seem to work at cross-purposes with dance solos that would normally be brightly lit remaining in the shadows. The projectors actively and strategically participate in what should or should not be seen. The result is a lighting design I found to be one of the most innovative I have seen in recent dance-theatre works. At times, I feel I am watching a screen rather than a live performance. The blurring between physical and virtual reality invokes an Orwellian unease. Now more than ever, when constant surveillance is harder to escape, this production draws attention to the power dynamics in the act of watching: the performers do not leave their thin boxes of light for long, but when they do, their movements are distinctly rebellious.

Hong Kong Exile also plays with time, primarily through duration and repetition. A voice over a loudspeaker announces chapter numbers in English and Cantonese. The sequential chapters provide a comforting sense of linearity in a piece otherwise devoid of narrative. Yet about three quarters of the way through the production, the chapter numbers suddenly skip backwards, repeat or jump into the future, disrupting that familiarity we had grown accustomed to. The ability to travel through time makes one imagine what quantum physicists ponder before they go to sleep.

A loud, aggressively cheerful song by Japanese musician Susumu Hirasawa blares on and off throughout the production (and annoyingly remains stuck in my head days later). It is hard not to bob one’s head to the beat even though the repeated use of stillness makes an uncomfortable statement on the voyeuristic nature of the spectator. The performers remain voiceless, except for one curious karaoke version of a Frank Sinatra classic. In another scene, two performers are seated, as if in a still-life painting, and slowly make their way closer together as the chapter numbers begin their erratic non-sequential jumps. The light scans over the two, like a scanner at an airport, while they move in imperceptible increments in the shadows. The scene is almost fifteen minutes long. Though I am all for challenging audiences to withstand long periods of stillness, and while the slow development did occasion me to consider the politics of the relationship between viewer and viewee, especially that of the white gaze on Asian bodies, there was not enough juxtaposition in the duration of the other scenes for this to be truly effective.

It is a work in which a displaced population imagines a future where they might belong. Though the show, according to Hong Kong Exile’s website, was written “for the Cantonese diaspora,” its themes could pertain to many populations in Vancouver, speaking to a loss of identity and an uncertainty around the future. The conclusion satisfyingly continues the theme of ambiguity that is present throughout the work. The projectors cast a white X onto the floor with the two male performers on either side. As the house lights slowly come up and people begin to exit, the two remain slowly turning. The lack of a bow leaves a feeling that the work continues and perhaps was in existence before we entered the space.

In a globalized world of constant stimulation, catharsis is a never-ending process, a way to navigate through constant external influences and find a sense of identity within. 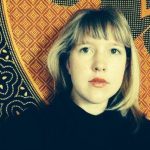 By Charlotte Priest
Read more by this author