After retiring as a principal dancer with Canada’s Royal Winnipeg Ballet (RWB), Jorden Morris began to explore choreography. His first ballet, The Three Musketeers, premiered in 1999. He has created numerous works since, including the transformation of the popular children’s television show The Toy Castle into an interactive live dance performance, and the Celtic-themed ballet Deverell. In 2006, the RWB presented the world premiere of Morris’s full-length ballet Peter Pan. The critically acclaimed work is the company’s biggest box office success to date, and toured Canada last year. Morris is also the associate director of the Royal Winnipeg Ballet School.

You’ve said that you consider music the soul of a ballet. Where do you begin in terms of making this fundamental choice?

After I have found a story and characters (this is for full length works), then I start the process of finding music that speaks to me for those scenes and characters. I spend anywhere from twelve to eighteen months finding music for my ballets. I try to find a composer, or group of composers that have great harmony and cohesiveness with their music. For Peter Pan I used primarily British composers that were writing music at the same time that J.M Barrie was writing the book. I like to think that perhaps Mr. Barrie heard some of that music while writing and therefore for me it creates a connection between the music and the story. For Moulin Rouge – The Ballet I explored the French composers from the time the Moulin Rouge was opening, Toulouse Lautrec was painting and the Eiffel Tower was being constructed. For the Tango and Gypsy scenes I found Quartetto Gelato and Astor Piazzola made a great fit with the mix. 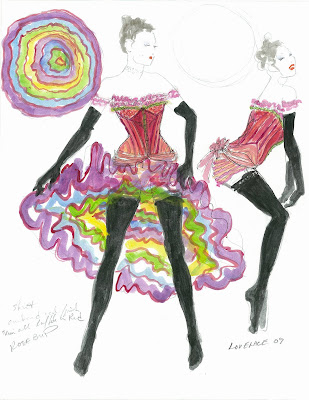 As you’ve indicated, developing a score for a full-length work isn’t a simple matter of finding a single piece of the required length. How do you decide which selections you’ll use and how they fit together?

Initially I make a list of music for a scene that I think will work – then I listen to those selections over and over again until one of them sort of jumps out and says, “I’m the right music for this scene.” This process can take hours, days or weeks. Sometimes it speaks to me very clearly, and sometimes it’s a piece I’ve listened to twenty-five times before I hear something in the score I hadn’t heard before, and it just clicks. Occasionally, there is a piece that I like for a particular scene, but it doesn’t work well as a transition to the following scene. This is where the lengthy process of “weaving” the score takes place. I try to find a way for all the selections I’ve chosen to work together. I may change the order of the scenes slightly to accommodate the music, or I may re-think the characters’ action in a scene if the music is right and suggests I take a slight turn with the story. This is one of the most exciting times of the creation process, but also one of the most frustrating and exhausting times. 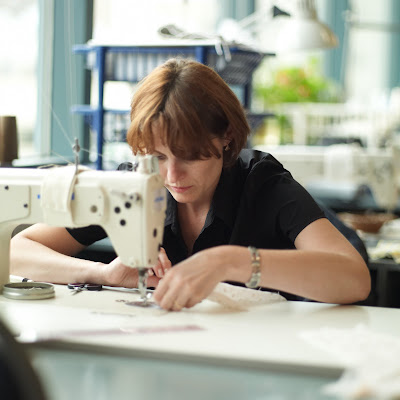 Once you have the music in place, how do you begin to develop the dance?

People often ask me if I choreograph the steps first and then find the music, or if I find the music and then choreograph the movement? For me the music is the most important thing after the initial idea. However, I start to envision choreography from day one of story and through music selection. I make notes for future reference and then pull those choreographic ideas into play at this point in the process. During the story/music process, I have an idea of what the dance will be like in each scene. For example: this will be her entrance solo, this a pas de deux, this a group corps section etc. So when I get in the studio with the dancers, I know what “type” of scene it is and what the dancing will be like to a point. I will work on my own to identify certain movements or series of steps for each character, as well as the “flavour” of big scene dances (lots of jumps and turns, or pattern work with canons) or pas de deux (lyrical, romantic, hostile etc.). 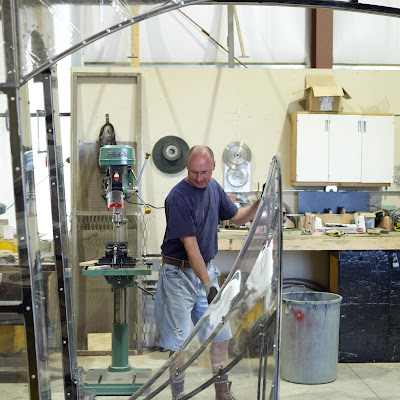 In terms of developing the movement material overall, and for specific characters, how would you describe your use of the established classical ballet vocabulary?

The classical vocabulary is such a great medium to work in, so I try to stay within that language. But I also develop derivative movements or a slightly different dialect for certain characters or sections. At times I will use more contemporary movements, and it’s always good to think outside the box. 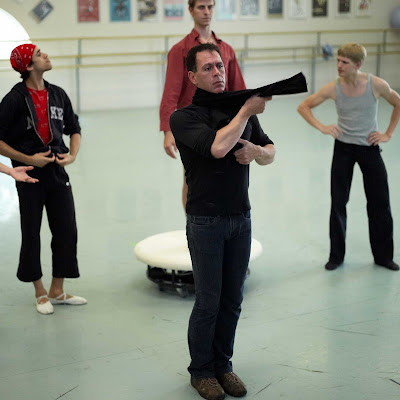 Classical ballet has sometimes been seen as an art that features the female dancer, and that the male dancer is simply there to present and support the ballerina. What is your perspective on the balance between male and female dancers in a work?

I think that perception is a bit dated personally – as a choreographer, I look at what stories would make great ballets. (Cyrano would be great for a male dancer, Joan of Arc for a woman). I think historically there were more female-focussed works, but I hope in the future of this art form, we will create works that promote the balance. 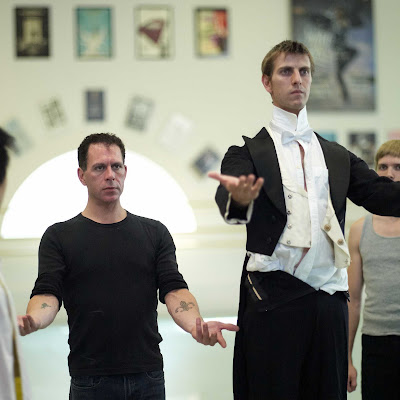 Jorden Morris, Gael Lambiotte and Tristan Dobrowney in Moulin Rouge – The Ballet by Morris for the Royal Winnipeg Ballet

For Peter Pan and Moulin Rouge – The Ballet, you drew on an existing story or text as a primary source for the dance. Is this a common starting point for you? How is your process different when working with more abstract concepts, as compared to character and narrative?

For Moulin Rouge – The Ballet, I wrote an entirely new script. All I took from existing sources were historical facts and names; then I wrote a script and developed it with my dramaturge. It’s an exciting process, but creating new characters can be a challenge as well. When working on an abstract piece, I let the music dictate the source of movement and what I want it to say. 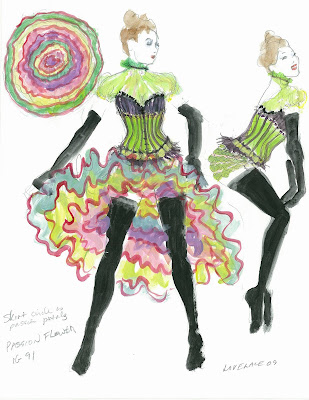 In the past, you adapted a children’s television show into a dance performance. Have you ever adapted dance for television or film? Do you have a dream project that you’d like to develop?

I have done several projects that take dance to television and film; it’s always an interesting process to combine these media. As long as I have the opportunity to create, this is my dream project. I would like to keep creating new ballets, and I would love to film Moulin Rouge – The Ballet. I think it would be a very successful ballet on film.

*A bilingual photo essay on Morris’ creative process for Moulin Rouge – The Ballet appears in the October 2009 issue of The Dance Current.