In the rural town of Stephenville, N.L., dance students are getting a unique, empathetic perspective on the war in Ukraine as they work with their Ukrainian teacher on relief efforts alongside their regular recitals and competitions.

Anastasiia Rudenko, a Ukrainian dance teacher, arrived in the Stephenville area two years ago to work for the local youth theatre company Nomad Stages. She is now the first dance teacher to work full time in Stephenville in decades. The community of around 6,000 people helped her settle into Newfoundland life, and now she has helped them forge a personal connection to a global issue.

“When she told us she was from Ukraine, she told us a bit about it,” said Brooklynn Cormier, a  14-year-old who started dance classes for the first time when Rudenko arrived in 2020. “That was my first time I ever knew anything about Ukraine. Then when everything happened with the bombing and everything, she was the reason that I followed up on it. It was important to her, so it was important to me.”

Similarly, the Bay St. George community was keen to support their Ukrainian members. Music, church and volunteer groups in the region, including Rudenko and Nomad Stages, worked together to produce two Song for Support events, which raised $12,000 in relief funding.

This was encouraging for Rudenko who is worried for her family’s safety and has been working to get her family to Canada.

“The first week [after the conflict began] was really difficult when I was coming to work and there was a lot of people asking ‘How you doing?’ ” said Rudenko. “It was really nice of them to check up on me, but the biggest problem is that I wasn’t there with my head. [As a dance teacher], you need to create, but [I couldn’t] because my brain was so empty; I couldn’t squeeze anything from me.”

Rudenko’s students and their parents were concerned. “I did a bit of research on my own,” Cormier said, “but [Rudenko] did open up a small bit about it and tell us what had been happening so far.”

Through this sharing and community interest, Rudenko has found some support. She was sponsored into the region by her employer, and even though she arrived during the pandemic, she was welcomed with care. Her employer secured an apartment with everything needed for two weeks of isolation and helped her and her partner get set up in Canada.

This is not uncommon in Newfoundland and Labrador. Due to the province’s aging and declining population, the provincial government has been advocating for immigration as a key part of their population strategy.

The ongoing war has now accelerated these efforts. Newfoundland and Labrador has been the only province in Canada to send their own immigration team to Poland to help displaced Ukrainians move to the province. They also run a dedicated Ukrainian Family Support Desk and have ongoing support to match fleeing Ukrainians with local jobs. On May 9, 2021, the Newfoundland and Labrador government even chartered their own plane to bring the first cohort of Ukrainian refugees.

“I understand why they want to do that. We are hard workers, and people will do anything to survive,” said Rudenko, who is enthusiastic about more Ukrainians coming to Canada to work.

“[Rudenko] is amazing. She’s a really good dancer and Stephenville is lucky to have her here,” Cormier said. 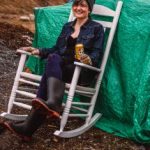