The 60th Cypress Funstitute, a weekend of square dancing, round dancing and dance workshops, is being held May 27-29. The event takes place at the community centre in Cypress Hills Interprovincial Park in southwest Saskatchewan, bringing people together from across the province as well as Alberta.

The Cypress Funstitute was established in 1961, running annually until the COVID-19 pandemic resulted in a two-year hiatus. The event is organized by Zone 6 of the Saskatchewan Square & Round Dance Federation.

“The most important part of the Funstitute,” said Renz Struik, secretary of Zone 6, “is just for everybody to come out and have a good time.”

This year’s event has about 50 people registered, down from previous years. “The whole activity is in decline,” said Struik, speaking about the common misperception that square and round dancing is only “for old people.”

Square dances require eight participants in four pairs, and steps are prompted by a caller. Round dances are ballroom dances done in pairs, with movements led by a cuer. “We use music that has been choreographed for particular movements through the dance, and I’m behind the mic and I’m telling them these movements as the music goes on so they don’t have to worry about doing their own choreography,” explained Struik, who is both a square dance caller and a round dance cuer. She is the headlining cuer for this year’s Cypress Funstitute.

Struik has called and cued at dance events across Saskatchewan and mentioned that some people have made a profession of it, travelling all over the world.

“Square dancing and round dancing work under two umbrella organizations out of the States, which are Roundalab and CALLERLAB,” she said. “We have to follow all their basics and teach all the same way so that wherever you go in the world, you can dance.” She added that square dancing can be pursued competitively in some locations.

The Cypress Funstitute has faced interesting challenges during its 60-year history. In 1982, a storm brought in at least four feet of heavy snow during the May event. During the 2018 Cypress Funstitute, a beaver downed a power pole. “The whole southwest was without power,” said Barber. “We found some generators … and had enough power to get the equipment running and managed to dance.”

Struik also recalled the beaver-related power outage. “We had no sound system, so we obviously had to call quite loudly,” she said, laughing.

In the past, dance events like this one rewarded badges to participants in various categories. The Cypress Funstitute was held in July at one time, and dancers could receive an aquatic badge for dancing in the nearby lake.

Beyond the Cypress Funstitute, Barber and Struik are looking forward to a square dance weekend taking place at Danceland in Manitou Beach, Sask., June 23-25. Danceland is a venue that is well-known for its horsehair sprung floor.

Though square and round dancing are most popular with people more than 60 years of age, Struik emphasized that they are fun activities for everyone and that she hopes to see more young people picking them up, adding, “It’s good exercise and it’s good for you mentally too.” 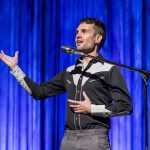