How does a dance association celebrate a milestone when live performances are next to impossible? If you’re Made in BC — Dance on Tour, you commission an interactive online artwork that takes users on a virtual journey through 15 years of performances and community engagement projects.

The association commissioned Dancing Stories from BC from Adriana Contreras, an artist and graphic recorder. The image shows dance hoops, a sweatshirt, a soup can and a hodgepodge of other items tumbling from the trunk of a hatchback on a B.C. highway. Click on any one of them and you’ll be whisked into a story about a dance artist who has toured the province through Made in BC – Dance on Tour or one of the community programs it has supported.

Miriam Manley, artistic and executive director of Revelstoke Arts Council, which has presented a variety of dance performances and workshops in partnership with Made in BC – Dance on Tour, points out that the interactive project captures a type of history that is often lost.

“I think it’s great for arts organizations to have an accessible story and an accessible history for people to be able to see because so often it’s like we’re churning out programming. We’re churning out all this stuff, and it’s really great at the time — it’s really engaging — and then it’s over and it’s forgotten in a way,” she said. “It’s hard to retain an institutional memory when you’re doing so much and also when you’re in the performing arts, when you’re in the business of live experiences.”

Made in BC – Dance on Tour was founded in 2006 to develop a provincewide network for touring contemporary dance. Since then, the organization has expanded its offerings to include residencies and workshops, as well as professional development and networking opportunities for artists.

“Quite some time ago, there was this realization that dance wasn’t getting out beyond Metro Vancouver into the interior,” said Edmond Kilpatrick, board member of the association. In a press release, he explained: “Working in collaboration with a network of dance enthusiasts, MiBC offers remote and rural BC communities access to professional dance artists beyond those in their local community, in addition to other resources that nurture a love of dance.”

In its 15 years, the non-profit has enabled more than 50 dance companies to tour British Columbia, with 20,000 people in attendance and 30,000 people participating in related community engagement activities.

Made in BC – Dance on Tour has also focused on promoting dancers and companies who have historically been excluded from mainstream contemporary dance opportunities, like Indigenous, francophone and Black artists and artists of colour. In 2015, the association organized the first provincewide tour of an Indigenous dance company, Dancers of Damelahamid, whose masked dance works are rooted in Gitxsan and Cree traditions.

“The tour for Made in BC was quite significant on many levels,” said Margaret Grenier, executive and artistic director of Dancers of Damelahamid. “More so than just a tour that was connecting us with audiences that were seeing our work for the first time, it was really a new way of connecting with and sharing Indigenous dance here in B.C.”

For Grenier, the Dancing Stories from BC project is a way to keep B.C. dancers and audiences engaged when most productions are on hold.

“With most areas or regions, it’s very easy to become disconnected, and certainly in the northern parts of B.C., where I grew up, there is a really strong disconnection between the artistic practices that are taking place in the communities and how we are connecting to the larger urban centres,” she said. “So I think that the project is really important in order to impart awareness and also for community building, the ability to relate to and to see one another and to be able to continue to produce or share work in some capacity.”

Dancing Stories from BC preserves the ephemera of live performances: photos, posters and audio recordings of artists’ memories. The result is a vibrant testimony to the impact Made in BC – Dance on Tour has had on British Columbia’s performing arts ecosystem. 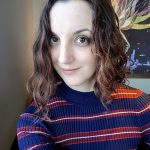 By Ainsley Hawthorn
Read more by this author