On Oct. 27, dancers across Saskatchewan engaged in the first-ever #SKdancestogether, a momentous provincial event that invited more than 120 dance studios to learn and perform a shared piece of choreography, then post their performances on social media platforms using the hashtag.

The idea originated with the Canadian Dance Teachers Association, but the group does not take credit for the event. Melissa Wallace, one of the event’s organizers and an executive member of the association said, “We’re crediting the dance community as a whole. The credit goes to the teachers and the studio owners and the kids and the parents, and just everybody who is still dancing.” Studios that joined the virtual flash mob ranged in location from small rural communities to the province’s largest cities.

One of the driving forces behind the event was a lack of visibility for the art form over the past couple of years, with the cancellations of dance competitions, recitals and other performances. Sarah Hoag, the executive director of Dance Saskatchewan, commented that #SKdancestogether “showed the people of Saskatchewan that the dance community is alive and well, even through the pandemic.”

Though they haven’t been able to meet in the usual ways, dance educators across Saskatchewan have been connecting online throughout the pandemic, largely under the leadership of the Saskatchewan branch of the Canadian Dance Teachers Association.

“You can feel the studios working together and being supportive of each other in a way that I haven’t seen in my 20 plus years of teaching,” said Erica Cochrane, co-owner of Birch Hills Dance Centre. Through those conversations, the idea for #SKdancestogether was formed.

Many studios opted to film their performances indoors with COVID-safe practices in place, while others had natural backdrops. One of the advantages of being outdoors was having enough room for a live audience.

“I can’t even tell you how amazing that felt,” noted Wallace, who is also the artistic director of The Dance Studio of Swift Current. “It was a really nice reminder of what performance feels like and how eager we are to get back onstage.”

The shared dance piece was choreographed by Dana Mutimer, artistic director of Tisdale Dance Centre. Wallace described the choreography as something everyone could learn. “You could also put your own spin on it,” she said. The participating studios represented a range of movement styles, and some adapted the combination to showcase their dancers’ strengths.

The choreography was also performed by dancers of many ages. “We taught it to the three-year-olds all the way to the 18-years-olds,” said Wallace, referring to The Dance Studio of Swift Current. “It was a great way to bring all the dancers in the studio together.… The younger dancers and the older dancers got to actually interact and see each other dance, and dance together.”

Regarding the future of #SKdancestogether, Wallace said that they would love for the event to happen annually. “It would be nice to see videos of … people picking it up and doing the combo at their work or at home and sharing some videos and keeping that hashtag alive, keep it going and just have some fun with it,” she said.

“It was really inspiring and exciting and uplifting,” Wallace said. “And I know that’s a lot of positive words!” she added with a laugh. 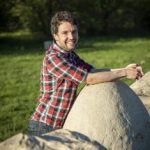