This Desiring Pony, a solo rooted in feminist methodology, calls upon internalized patriarchal modes of oppression existing both in the body of a female dance artist and in the dialectic between performer and audience. In the work, performed at Dancemakers Centre for Creation on December 15 and 16, 2016, dancer/choreographer Andrea Spaziani generates a performance situation that holds itself open in its complexity, never indulging catharsis or didactic resolution. This commitment-based ritual of bodily relating is troubled by previously attributed interpretations, conveyed through textual materials. Yet it also plays out within the hollow space of watching a performer repeat their own private score made in isolation from viewers. This dynamic compounds the degree to which the subject matter reflects on and anticipates its exposure to an audience.

When we enter, Spaziani is warming up behind the scrim, which doesn’t reach the floor so we can see her below the knees. She crawls under the scrim, sliding and creeping back and forth in spiral motions. Her face is obscured, hair hanging over and torso hunched towards us. She wears a skin-tight, shiny black bodysuit with gloves and a hood, evoking reptile, space chameleon or shadow. Around her waist is a kilt. Movements initiated from the hands that recycle space and discharge energy are accompanied by Andrea’s pre-recorded voice:

“She comes up to you and whispers in your ear: they know that you’re faking it.”

“She comes up to you and whispers in your ear: no more angry woman solos.”

Spaziani’s work stands with that of a generation of (mostly female) contemporary dance artists who desire and romanticize a post-dramatic context, rejecting performativities and institutionalized expectations of male choreographic gazes. On the one hand, these artists contest dominant modes of working and representation, but in their own quarters they also grapple to make work neither about themselves nor unrelated to their experiences. In this piece, Spaziani subverts a potential confrontation with her own ambivalence to perform, through awkward humour and self-critique. Throughout the score, she copes with the internalized tensions generated by an art-market contemporary dance context that shifts from authorial expressions of formal/conceptual potentialities to feminist/queer/ethnographic research of subjective bodily experiences and relational states.

The integration of somatic practices that place ‘the body’ and embodiment as both topic and site of research has greatly influenced contemporary dance and performance, particularly in New York and Europe. This development runs counter to the hierarchical and historical workings of dance companies and formal-technical training programs, increasingly difficult models to maintain or justify. In 2015, Dancemakers became an incubation house with artists in residence, in part to reflect and support this shift.

This Desiring Pony makes a peculiar use of Brechtian distanciation techniques in that the artist provides materials that reveal her own (often ironic) thoughts and self-reflections to the audience. This distancing in relation to materials of intimacy also expresses itself in the artist’s choice to refer to herself for this work as the alter ego Schpando.

Spaziani creates detachment by layering her pre-recorded thoughts over what she is doing. Through textual materials she comments on what is happening, perhaps in an attempt to claim (or deflect) meaning-making before it comes from without. In this setup, the audience members can potentially relinquish their habitual role as critics and may perhaps participate more – or less – as a result.

Somehow in this coming clean there is another story untold, a performance further distracted from and obscured. The two largest sections of movement occur in relation to a pair of boxing gloves and a metallic helium balloon in the shape of a giant number 3, grounded by a small medal of achievement. These dances are further accompanied by projections, music and text. In exposing her estrangement from the audience by interrelating with these objects and materials, does Spaziani invite spectators to draw closer to Schpando or deeper into their own self-reflections? Schpando’s voice:

“She comes up to you and whispers in your ear: manifest something other than your own butt. Get out of your head. Get under the floor.”

The audience is subject to a projection showing whatever Schpando does on her laptop. She writes in a stream-of-consciousness style, sometimes typing directly to the viewers.

“This is the exorcism of A Spaz’s small masculine spaces.”

Distanciation is created in the relationship between performer and audience through various means. There isn’t a short moment in this work where the audience’s attention is not divided between the performer’s bodily presence and another element in the work, whether it be projection, prop, costume, audio or text. Even though there is a persistent stream of words either to be read visually or registered aurally, Spaziani never speaks to the audience with her actual voice. There is a formality to this choice that belies the honesty and perspicuity of the actual words shared. Although seeming imminently present, like the inside track of a meditation, this text is pre-recorded and may have been carefully scripted. At one point the recording murmurs: “don’t fuckin’ laugh.” Some audience members break into muted chortles.

The choice to type statements directed to the audience through a projection also elucidates the theme of intimacy-through-distance.

She hits backspace, erasing “EYEBALLS” and replacing it with “PRESENCE.”

Editing in the moment has a live-ness to it that I find myself again questioning, wondering if this has been practiced beforehand.

She googles “emancipation”, plays Mariah Carey’s “The Emancipation of Mimi” from YouTube, then changes the text in the search box from “emancipation” to “ewomancipation.”

This public display of computer use leads the audience, as though spontaneously, through a series of technological pop symbols that play out a high-function cognitive investigation. Schpando lands on the image of a gold pony, echoing the title of the work, and perhaps exposing the possibility that this laptop-based scene has been choreographed and rehearsed. I sit in my chair and wonder what it would feel like to rehearse googling.

Boxing gloves with a plus sign on the right hand and an x on the left – tilted angle, shift of meaning. The choice of an x rather than a minus sign denotes either a shameful judgment of wrongness or the mark of a pirate’s bootie. X marks the spot. Folded over at the waist and sliding across the space on gloved hands, Schpando moves with ambivalent yet sharp movements that indicate a state of comparison: either/or. Left brain, right brain switching back and forth as one perceives the experience of the other. An internalized struggle of compulsion and receptivity, patiently negotiated without pretense or goal-orientation. The only time Schpando boxes is at the beginning of the work – without the gloves. The glove dance is neither defeat nor victory.

“I can’t commit. Yes I can grab tightly.”

At the beginning Schpando’s thoughts are structured through the haunting repeating form “she comes up to you and whispers in your ear …”; whereas, at the end, each self-defeating thought is seconded by an affirmation that clouds and tempers each moment of “I can’t” with an “I can”. This speaks to a loss of agency that is then met with a quiet attempt at inverting the disempowering voice’s rhetoric.

Local and national funding structures for contemporary dance have encouraged dance artists to make work independently, as a new version of ‘contemporary’ reasserts itself every few years, challenging generations of dancers to establish themselves as career artists. Making independent solo work is the most economical, tour-friendly and realistic way to develop an idiom with consistent and personal artistic rigor. Individuals may work with an outside eye who serves as a primary observer over the course of the process. In the case of This Desiring Pony, the artist had the support of a studio advisor and research advisor, both through the Transart Institute (an international program that runs partly through a digital learning framework). Videos of work in the studio were sent, conversations had over Skype and ‘dramaturgical materials’ exchanged.

However, without an external choreographer or dramaturge sitting and waiting for performance moments to unfold in front of them, solo dance artists must continually split themselves into different roles. They attempt to mediate what they are working on from both their own embodied experience and that of potential witnesses. This could be considered alternately as de-specialization or the multi-tasking necessary for the movement artist to stay in relation to markets in which addressing just one mode of practice (other than ballet) has become unsustainable. This Desiring Pony both honestly and covertly expresses a common working state fashioned by the conditions of today’s market for solo works concerned with identity politics. The subject finds herself in an artistic headlock, listening hard for her own voice among dichotomizations of aesthetics.

In making solo work, artists renegotiate their relationship to virtuosity and the obligations placed upon them, in terms of what motivates the exertion of their practice. These intrinsic desires and resistances amount to the artists ‘materials of intimacy’, which then necessarily undergo a process of modification through the detachment necessary in crafting performance. When making in collaboration with ‘oneself’, the creator enters into a deconstructive process, cross-examining practice either as organismic ‘response to life’ or toward the fulfillment of an external product-based economy of distraction. Does the artist consider practice as living (generative) or working (economic)? Within this constructed polarity, experiences of agency, desire and being clash with efforts to either appropriate or resist perceived forces of compulsion. In either case, the very act of self-reflection performed with and for an audience can be seen as privilege, sacrifice and perhaps even curse bestowed upon the artist as ‘benefactor’ of her own research.

Having exhausted and kept at bay the need to perform, Spaziani does not emancipate – and whether or not she “ewomancipates” is up to each audience member to decide. Whether those present to Schpando and Spaziani’s labour feel something has been processed within themselves becomes the question.

“Where have you been?” was projected as we were waiting for the piece to begin. Does this speak to the absence of a self-witness? A proposition to consider our own absence from the very situation we have come to engage with? Is the audience ironically required in order to confront and attempt an emancipation from performance? Turning inward to invert expectations of performativity becomes a political act levied by somatic practices and conceptual approaches trending in the international performance market.

This entire ritual of self-reflection expires into the complex space of subjectivity that lives between a performer, her own self-witness and each audience member.

The ultimate bit of text resounds:

“I can’t do this without anybody watching me. Yeah, you’re alone.” 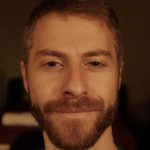