There’s a beautiful peasant girl, a handsome count and a waltz-happy village overflowing with wine. But one fatal lie lurks beneath this Cinderella story. Giselle is a Romantic ballet, after all, not a children’s tale. Let’s rewind.

The curtain first rose on November 6, at the Four Seasons Centre, to reveal a misty, thatch-roofed Germanic village, designed by the late Desmond Heeley. It’s a perfect habitation for the sweet teenage peasant Giselle (Svetlana Lunkina) and her beau, Albrecht (Harrison James), a noble count in disguise. Under the direction of Karen Kain and swept along by the expressive baton of conductor David Briskin, this production conveys the precarious beauty of first love, and painful consequences of betrayal.

Lunkina is no stranger to the role of Giselle, yet each step appears spontaneous and fresh. Her Giselle is endearingly shy and thoughtful; she pauses to consider her feelings for Albrecht when their hands finally touch, and she has a nervous habit of bowing her head. The low-hemmed romantic costume shows off Lunkina’s exquisite footwork, from spirited piqué turns to floor-skimming glissades. Lunkina’s greatest skill, however, lies in capturing the girl’s fragility. Like a glittering piece of fine crystal, Giselle is only one misstep away from shattering into oblivion.

James is a genial Albrecht; we know he is lying about being a peasant, but we don’t care — yet. His upper body is regal and elegant. He offers Giselle an arm and cheekily mirrors her steps, with slightly higher extensions. A lovely moment occurs in the midst of the village celebration, when the couple marks their steps quietly, as if in rehearsal, without performing them. It is as if they are lost in each other and, for just a moment, have forgotten their love of dancing.

Hilarion, local forester and romantic rival, is sometimes played as obsequious drip. Not so with Piotr Stanczyk, whose bold movements are those of a labour-hardened peasant. His love seems true enough, but it’s crude. He lunges and grabs at Giselle repeatedly, who recoils in disgust. Poor Hilarion. How can a woodsman compete with the casual glamour of an off-duty royal?

By the end of the act, Albrecht’s stashed sword reappears, and Giselle thrusts it into her chest when she finds out that a richly dressed noblewoman (Tanya Howard) is Albrecht’s bride-to-be. Lunkina transfigures into a wild animal, performing a few reckless, contorted leaps before collapsing dead on the ground. There are shades of Shakespeare’s Ophelia, who similarly descends into singsong madness and an offstage death after being deceived by her lover. But unlike Ophelia, Giselle gets another chance, of sorts, to set things straight.

Act 2 takes place in a moonlit wood, home to a breed of vengeful feminine spirits, the Wilis, the ghosts of maidens betrayed by their lovers. Their leader, Heather Ogden is a cool, icy Myrtha, who dances like crystallized vapour. Her promenade en arabesque, in her first solo, announces her strength and control. She’s a beautiful and terrible battle-ready queen. Her arms are straighter and more assertive than Giselle’s, and she often flicks her head sharply to face the audience, as if saying, “Just watch me.”

The precision of the corps is terrifying. Their razor-sharp lines would put any military parade to shame and, as it turns out, the Wilis are just as lethal. This vaporous troupe discovers a remorseful Hilarion, their first victim of the night, curled up in prayer over Giselle’s tomb. The Wilis hold a diagonal line, changing position in quick succession like a pianist’s fingers playing a smooth glissando, before flinging him offstage, to his death.

At Myrtha’s request, the Wilis swarm Giselle’s grave to summon their newest recruit. Giselle’s cheerful leitmotif, her signature melody, plays, almost mockingly, as Lunkina performs frenzied, flat-footed spins in arabesque, like a figure in a broken music box. She is now one of them, and yet, she is somehow different, as her tutu is purer white and her arm movements more generous.

Albrecht enters the forest, and James has saved the best for last. He performs a soaring, stunning solo, including an impressive series of swift jumps and flashy mid-air beats. No longer a faux peasant, he allows himself to be regal and magnificent in what could be his last dance. After a particularly challenging passage, he collapses in exhaustion — will he be the next victim?

But Giselle has bought him just enough time. After a final pas de deux, the lighting (a credit to Gil Wechsler) turns a stunning salmon pink: dawn is approaching. We see one last glimpse of Giselle — a spooky illusion — hovering halfway to the sky behind several screens and veiled once more. Is this an ascension? The dancers hint at some unexplained protective power encircling her gravestone cross; perhaps Giselle’s selfless deed has freed her from this twisted sisterhood.

The curtain falls with Albrecht walking slowly towards the audience, palms displayed. Love is not without casualties, but it does redeem. 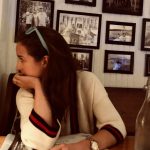 By Jane Coombs
Read more by this author