Artistic director of her Toronto-based interdisciplinary performance company, hum, Susanna Hood is a choreographer, performer, director and teacher working at the intersection of dance and sound. Her collaborative projects as well as her own choreography and music compositions have been presented throughout Toronto, nationally, and internationally on stage and in film since 1991. She is the recipient of various awards including the 1998 K.M. Hunter Emerging Artists Award in Dance, the 2006 Dora Mavor Moore Award for Outstanding Performance in Dance for her solo show She’s gone away and, most recently, the 2008 Victor Martyn Lynch-Staunton Award for Outstanding Achievement in Dance.

In your artistic statement in the May 2010 print issue you state: “My passion lies in using the body to express its most intimate experience of emotion in movement and sound.” What have you come to understand about this experience through your work?

Our bodies speak in many ways, and who we are at our most basic and primordial level lives in our cells. I don’t fully understand it, but there is something about moving and sounding combined that has the potential to bring a very pure version of that intimate, unadulterated self out to play. It’s unwieldy and volatile and extremely direct. Engaging in this way keeps the human, in all its nuanced subtlety, in the room as we work. It’s this vibration that I learn to interpret during the course of a process, and the better I get at understanding it, the more the work speaks to me and tells me what is necessary. 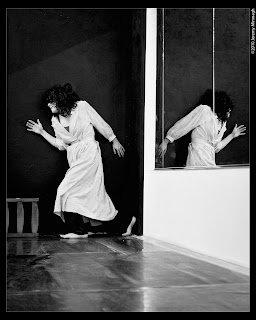 In your artistic statement, you talk about your interest in exploring and revealing new processes and explorations in dance, music/sound and the interplay between the two. You say: “This kind of hybrid work by its very nature forces both creators and viewers to question and investigate their points of view.” What, for you, is the significance of this questioning?

It’s very important to me that the needs of the work, as opposed to my personal needs, come first and foremost. Sometimes that line is a bit blurry, especially at the beginning of a process. But eventually, the work has a life of its own that demands fulfillment, and it’s my job, with my collaborators, to discover what’s necessary and to meet those needs. In that regard, we often need to create ways of working and develop tools that are perhaps new to us, and maybe even challenge what we thought we knew. I believe that this is how we grow, both in the studio and in life in general. 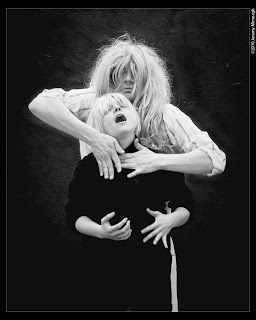 Having worked extensively on self-solo material, I wonder how you select performers for group pieces. What do you look for in the dance artists you choose to work with?

Working with other interpreters is relatively new for me, so I am still discovering all the desirable and necessary traits for a fruitful collaboration. Certainly, the ability to work collaboratively and to fully engage one’s own imagination is essential, especially as improvisation is a large part of the initial stages of my process. I prize maturity and complexity in a performer, but above all, an open mind and a hungry fearlessness to push one’s own boundaries and to work deeply and intimately. These are all things that I demand equally of myself, expecting not perfection but a rigour of intent. Because of the vocabulary I use, a strong background in movement and vocal work are assets, though vocal training is part of the process itself. And seeing that the work I’m making increasingly encompasses narrative, some experience in theatre or willingness to engage in a theatrical approach is useful. I like people to be themselves. It is the individuals in the room and what they bring to the work that inspires me. I owe a huge debt of gratitude to all the performers who have contributed to the making of Shudder, most especially Alanna and Dan. 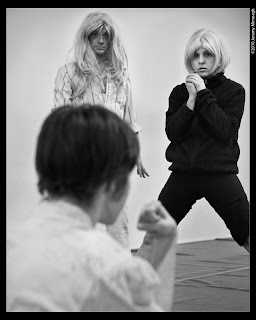 You have expressed your belief in the value of long-term investment in a work, and have completed at least two residencies for this project, which has been several years in the making. In each of your residencies, first at Montréal Danse and then at Le Groupe Dance Lab in Ottawa, what were the primary questions or discoveries you made that moved you forward in your process?

A long-term process for an artist/company of limited financial means – like myself and hum – means working through a sporadic number of intensive studio periods. For this reason, almost every phase of this work has felt like a residency, whether or not I was a guest at another institution. And for that reason, each time I returned to the studio, I had a specific intention, if not a specific goal, and the results of this focus informed the next phase of work. Particular to the residencies at both Montréal Danse and Le Groupe were first, that I was working with a different number of performers (in Montréal, two, and in Ottawa, six), who wouldn’t be part of the finished work (although Alanna and Dan accompanied me to Le Groupe), and second, that I was completely on the outside and not working as an interpreter. There were many discoveries made in both of these periods, but the one significant and common thread was how integral my external visual, aural and emotional perceptions were to the completion of the work. I already had a strong and wordless connection to the material, and having to find a way to transmit that relatively quickly to a new batch of people helped me to articulate what was most important as well as to find efficient ways of bringing people where I needed them to go. This experience also influenced my choice to continue the process with someone doubling my role: Lori Duncan, Jessica Runge and finally Maryse Carrier. Despite that fact that I have resumed my role as performer, all three of these women have positively informed the creation of the work as a whole and my role in particular. 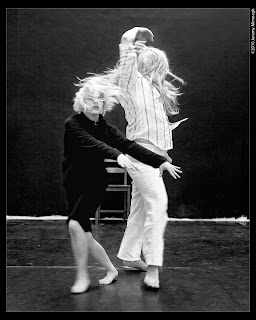 You recently described your creative process to me on the phone, noting that you start from an impulse/catalyst, create a field for your process and then create material in that field. Through this work, you discover your subject and then serve the needs of that subject once it makes itself known. How did this transpire with Shudder? What drew you to the paintings of the twentieth-century artist Francis Bacon, and how has that catalyst driven or shaped your process?

I had known Bacon’s work and been drawn to it for a long time. In the summer of 2007, near the end of short sabbatical where I’d kept a distance from all art-making and art-viewing, I attended an exhibit of his work from the 1950s and 1960s at the Albright Knox Museum in Buffalo. The combination of being in such a fallow and ready state and seeing so much of his work at one time was catalytic. It’s precisely the extremity for which he is known that resonated with me. My own guts twisted in response to the violence rendered on the flesh, as though the images had reached under my skin. In his work, I recognized something of myself, my work and my desire to communicate in such a direct sensorial way with my audience. So this meeting felt like a call to action on my part. Certainly, the imagery, contortion, blurring, obscuring, and the play with grotesque facial expressions, bodily postures, and the sounds derived from inhabiting those states were all starting points for creating our field of play. But I also took a lot of inspiration from reading about Bacon, most significantly through David Sylvester’s collected interviews. What Bacon had to say about aspects of his own process inspired, affirmed and even challenged some of my choices. The biggest challenge for me has been to keep the tension between narrative and abstraction alive, where Bacon was explicitly uninterested in narrative in his own work and had little respect for abstract painting. 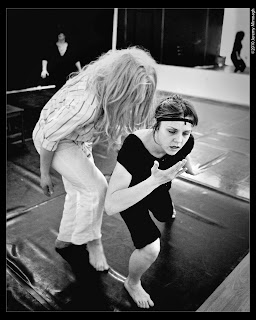 In philosopher Gilles Deleuze’s book Francis Bacon: The Logic of Sensation (1981), he discusses Bacon’s work as functioning at the level of bodily sensation, acting directly on the nervous system of the spectator, versus working at the level of representation and being understood through cognitive processes. Does this idea of a bodily connection resonate for you?

I’ve touched on this above, but certainly this bodily connection – my and my interpreters’ bodies and whole selves communicating directly with the bodies and whole selves of our audience – is precisely what I strive for in my work. And it is something that I recognized in my experience of Bacon’s work. It made the choice to pursue a response to his work an organic rather than a logical thing. It felt like coming home. It’s what I seek as a member of the public as well, and why I am so fond of other artists such as Louise Bourgeois and Philip Guston. They feel like family to me.