Libby is my best friend, my competition, my enemy. Mostly because — I think — she’s the tall, mature, beautiful one between us, meaning I’m the small, fat one. I tell her I want legs like hers, partly asking for a compliment, even if it’s a lie. Libby says she wishes she were shorter, that she is tired of towering over her classmates, her older cousins, her mother, though she never returns my wish to swap limbs. Our dance teacher overhears my wishes for Libby’s body; she tells me we are like two neighbours with different backyards, each of us wanting the other’s grass — talking about self-love as if it’s as simple as pliés. Then she asks us to strip naked in the studio — as she stands in front of the small window to prevent parents from looking in at an inopportune time — to try on our recital costumes.

The white leotards and tulle skirts are labelled on the insides with our names, though our teacher, Ms. Anouschka, hands them out without having to look at the labels. After a year of classes, she knows us all by body length, girth, torso, even skirt length. We slip into our costumes — the others seem to be as embarrassed of their bodies as I am of mine, despite me being twice their girth — and turn to the mirrors for the results of our costume fittings. We pat our tummies, smooth creases in the spandex and pull at the necklines for more coverage. We’re relatively satisfied with the costumes, though not particularly excited about them, until we see Libby. We flit our eyes between her body and our own. Libby looks in the mirror and does the same, looking over at our bodies and her own. Of course, she looks flawless in her white leotard — the four-way stretch Lycra simply grazing over her collarbones, her ribs, her stomach, even when she exhales — and everyone lets her know. For all the years I’ve known Libby, she’s gotten these compliments, and each time, she seems more and more exhausted. Even at school, in overalls and sweatshirts embroidered with butterflies instead of a leotard and tights, Libby’s recognized to be a beautiful dancer, mostly because she’s tall and willowy and has nails that extend her long fingers. Still, she frowns at herself in the mirror and begins prodding at her own leotard, pulling up at the neckline, yanking the elastics around the legs until seams pop. Then she sighs, “I hate my body.”

Soon after my mum left my dad, we moved into a two-bedroom apartment next door to Libby. Her mom and my mum introduced us by offering each other free babysitting. Eventually, driving down the mountain to skating rehearsals became too tiring for my mum to handle alone, and she put me in Libby’s ballet class instead so we could carpool. It turned out to be a lot like skating in some ways — the techniques were not quite the same, though both demanded a certain graceful quality I still have yet to hone. Our ballet teacher offered me the same criticisms my skating coach told me time and time again: “Straighten your elbows; raise your arms; lift your chin; engage your tummy.” But ballet taught me things skating never did: that sloppiness means weakness, that weakness means fatness, that I am, especially in comparison to others mine and Libby’s age, sloppy, weak and fat.

After months of consistent hard work in Ms. Anouschka’s class, my body still looks like it did before I started classes — that is, nothing like the other girls. One day after class, I realize I hate my body, and this realization stays with me. I recall every detail about that moment, like how my mum remembers when Princess Di was reported dead; she was on her way home from work and the car radio delivered the news, which led her into a gentle fender-bender. I recall the way I looked nothing like the alumni in photographs on the walls of the lobby or the girls in the paintings, dressed in old-fashioned skirts and hard shoes, on the bathroom walls or my classmates or the older girls we all looked up to. I remember recognizing my body as being what made me different, recognizing that there was a correlation between dancing beautifully and being skinny. That all dancers who were successful gave up everything for their craft, including eating cake or breathing out while sitting down. That if there were a graph that showed the relation between confidence and costume measurements, the data would create a plummeting diagonal line.

In preparation for our spring showcase — an opportunity for the studio to capitalize on parental guilt by forcing them to pay $45 to sit through a three-hour show just to see their child in one or two routines — the costume maker measures us for our Sylphide-like tutus: white leotards, tiny wings and ankle-length skirts. She pulls us out of class one at a time in the middle of floor stretch — when Ms. Anouschka forces the girls in the front row to do oversplits. Now is the time to be stretching as much as we can, she says. The most flexible we’re ever going to be is at ten years old, she says. That it’s all downhill from there. The seamstress measures me in the backroom for privacy, wrapping the measuring tape between my legs, draping it over my shoulder and announcing I’ve grown two inches since last year. I peek at the numbers, seeing my measurements in comparison to my classmates: mine consistently larger than everyone else’s. I talk about this with Libby later, looking perhaps for comfort or an understanding of my body and its difference. She turns to me and says maybe it’s just my genetics — a nicer way of putting that I’ve always been doomed to be fat.

I think of this later that evening in the bathroom when I’m out of the shower, about to put my jammies on. I look at my body in the full-length mirror on the wall, opposite the mirror above the sink. My reflection from the mirror before me bounces back into the mirror behind me and back into itself, throwing the image of myself deeper than I can reach. Infinitely, my reflections bouncing between the mirrors I’m standing in between grow smaller, bluer with the tint of the glass, further removing my image farther back from its original. I think I’ll be happy — I point at one of me, one way in the back, maybe twenty times removed — when I look like her. 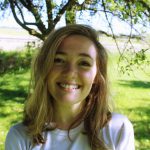 By Kendra Guidolin
Read more by this author

Tagged: All, Writers & Readers, All