This article was originally published in the Summer 2022 print issue.

“Man is a creature who walks in two worlds and traces upon the walls of his cave the wonders and the nightmare experiences of his spiritual pilgrimage.”

This quote from Australian writer Morris West connects the varied lived experiences of humanity, walking through contrasting identities, constantly searching for the space to exist and to find meaningful expression. Although some might not consider the dance community in Alberta to be tight-knit, there are many opportunities for dancers to form connections and showcase their work. The commitment to these spaces and these expressions has been a working theme for Dancers’ Studio West, and their newly appointed artistic director.

Since 1980, Dancers’ Studio West has brought contemporary dance performance to Alberta. Oswaldo’s vision is to combine intellectual rigour with deep creative practice by connecting art with conversations about culture and politics, and to make the creative process more accessible. While his upbringing nurtured his passion for dance, it’s the intricate way that he can walk in contradicting spaces as an immigrant, a Queer man and a former Mormon that makes him a unique and compelling artistic director.

Born in Guatemala and raised in the United States, Oswaldo has lived in Canada since 2004, currently calling Calgary home. He is also a member of the 2S/LGBTQIA+ community and draws heavily from these intersections of his identity to represent his values and interests in the dance community. Parts of his dance journey are thanks to more traditional dance activities he experienced during his upbringing in the United States.

“My story is quite complex,” he says. After emigrating from Guatemala, Oswaldo grew up in Utah, a predominantly Mormon state. His family was, and still is, Mormon. “Growing up, part of the appeal [of dance] was that, in specifically Utah, it was used as a wholesome activity.” The energy of the art form also fuelled him.

He began competing in Latin dancesport – competitive ballroom dancing – which not only engaged him from a movement perspective but was also a socially acceptable activity where he could thrive and express himself. “What hooked me was the vivacious energy,” he says. “I have ADHD and I’m neurodivergent. And the physicality – I was finally able to express myself in a way that felt genuine to myself. But then, on top of that, there was this culture that was saying, ‘This is a good activity for young people to be doing.’ ”

He notes that while dancesport allowed him to expand what he knew about dance into other pathways, his identity as a Queer person and a person of colour was fundamentally at odds with the heteronormative dancesport community in Utah. “You were obliged to dance with women and perform hyper-masculinity,” he says.

Oswaldo says that another area of friction for him was the limited creativity he could exercise in short dancesport routines. Usually, the one-and-a-half-minute dancesport routines are performed several times a year and always with the same partner. Although he still found satisfaction in the specificity of dancesport, he ultimately felt confined to the same movements, and ultimately the same stories and vocabulary.

Although Oswaldo critically examines the role that dancesport has played in his life, it still informs much of what he does, and he has learned to take important notes from his beginnings, while pivoting to contemporary dance. At the University of Calgary, Oswaldo found the creativity he felt was lacking in his dancesport days. In 2015, he received his BA in dance with distinction, then completed his master’s in dance at York University where he’s now working on his PhD researching same-sex partner dance.

Stereotypically, many assume that the expressive motion of dance and the intellectual focus of academic institutions are two separate entities. Oswaldo says that both use the body in different ways and that these two competing ideas are ultimately linked. “Dance is a form that employs the body, this means of expression, and you can’t really separate a lot of things within the body,” says Oswaldo. “The body is messy, and we think with our bodies. And so this idea that academia and art are at odds with each other is a very prevalent idea. But my mind and my soul occupy the same space.”

Oswaldo says that he is often at these intersections of identity, always navigating different areas of expression and finding a way to bring them all together. However, this is exactly where his strengths come into play, interacting with the Alberta dance community and giving a space to people of all backgrounds and experiences.

To learn is also to dance, and according to Oswaldo, understanding and theorizing dance is just as moving of a performance as taking to the stage. “When I study, I really consider it as a sort of dance, that the neurons in my mind are being myelinated in a different fashion. They’re learning to fire in specific ways in response to stimulus,” says Oswaldo. “And when I’m in the studio, my brain is doing the same thing. The nerves in my muscles are being myelinated in a very specific fashion, and they’re learning to function in a very specific way. So I take whatever I learn, and it gets absorbed in my body, and those are the ideas that make their way onto the stage.”

Marie France Forcier, former board chair of Dancers’ Studio West and current associate professor at the University of Calgary’s School of Creative and Performing Arts, says that Oswaldo is the type of person to make those more personal connections in the community, using his physical dance training as well as his academic know-how. “From the very beginning, [Oswaldo] was interested in making the form approachable, as opposed to intellectualizing it, and then bringing people into the literacy from a place of, ‘We’ll meet you where you are, and we will actually listen to what you’re interested in and make it more accessible,’ ” she says.

The body is messy, and we think with our bodies. And so this idea that academia and art are at odds with each other is a very prevalent idea. But my mind and my soul occupy the same space.

It is this life experience and intersectionality that is exactly what Oswaldo is hoping to bring to this role. “I find myself at the intersection of a lot of these worlds that don’t often make sense next to each other,” he says. “So art in academia, being Queer and having been raised Mormon, even being a scholar and a neurodivergent person — all of these are really arenas that don’t often intersect. But I have found that that’s a fantasy that they don’t intersect.”

Ultimately, Oswaldo is determined to find his place in the world and, by extension, allow for these spaces to open up for people who don’t see themselves in the dance community in Alberta. At Dancers’ Studio West, he believes that the most exciting and challenging part of his role is navigating the nuances within the city itself. When musing over which city he would like to be in during a zombie apocalypse, his final decision was Calgary.

“In the dance community, there’s a story – I want to call it a lie – that we circulate, that people get to a certain level and feel that they can’t go any further and then move away,” he says. “But actually, so many artists come to my mind, who I admire and respect so deeply. And I’m not sure if their work could have happened anywhere else.”

He points to seemingly everyday things like Calgary’s architecture and landscape that promotes a unique performance environment that can’t be replicated. Inspired by the sweeping Prairies, Oswaldo notes that Calgary has space. His vision of creating space for diverse artists to thrive is directly reflected in the way Oswaldo asks for the community to challenge what it is they think they know about the art form. Ultimately, there is space for everyone to grow and connect once we acknowledge the biases we all possess.

Oswaldo believes it’s important that we first identify, question and challenge our opinions and biases so that storytellers can maintain the integrity of their stories and their voices. “We have fertile soil; it’s really just about organizing which crops go where, metaphorically speaking.”

Forcier is excited to see Oswaldo continue to make space for interesting narratives and performances but mentioned that she is most looking forward to reading his finished dissertation on same-sex partner dance. “It’s very interesting. And I think I’m very interested in his humility in approaching the subject matter, although he is quite knowledgeable,” she says.

While there are many things that Oswaldo has to be proud of, his connection to all parts of his identity and ensuring that nothing is left behind is a strength that Dancers’ Studio West can look forward to. Ultimately, Oswaldo’s vision is to keep inhabiting and finding those individuals mixed between two seemingly disparate worlds, and bring them to centre stage. 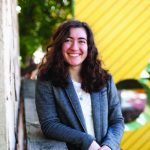 By Cristina Paolozzi
Read more by this author