The first grand notes of The National Ballet of Canada’s revival of Romeo and Juliet at the Four Seasons Centre on March 11 were an instant reminder that Prokofiev’s music is among the twentieth century’s finest ballet scores. The music conjures up images from versions of the star-crossed lovers created in the sixties and seventies by great choreographers as MacMillan, Nureyev and Neumeier. John Cranko’s beloved rendition entered the company’s repertoire in 1964.

This makes the Russian choreographer Alexei Ratmansky’s 2011 Romeo and Juliet a refreshing change. Commissioned for the National Ballet’s sixtieth anniversary, Ratmansky’s production has since become a touring showpiece for the company, earning its place alongside more canonical versions. The popularity of more seasoned productions is often at odds with the advent of new works — a tension that runs through Ratmansky’s sumptuous production. But Shakespeare’s iconic story and Prokofiev’s unforgettable music invite the audience to draw comparisons between their favourite stagings, old and new.

Above all, Ratmansky’s choreography is flawlessly musical. Every step that appears onstage perfectly fits the silver sound of Prokofiev’s score, which soars from the pit under David Briskin’s experienced baton. It is on this minutely detailed musicality that Ratmansky’s reputation as a choreographic genius rests. He shows off his Bolshoi background and the dancers’ skill with classical choreography that is sophisticated and fiendishly technical, imbuing conventional ballet steps with surprising freshness and a narrative drive that limits dependence on dated pantomime.

Guillaume Côté and Elena Lobsanova, as the lead couple, meet the technical challenges brilliantly with elegance and lightness. In contrast, the townspeople’s mix of grounded contemporary movements with a folksy vernacular offers a chance to enjoy the strong personality of the National Ballet’s ensemble. Ratmansky fills the stage with little other than dance, although this is occasionally detrimental to fight scenes. In the heat of battle, pirouettes seem to outnumber rapier strikes, and a few slaps stand out as unconvincing.

The precise, foundational steps sometimes fail to convey all the same emotional power that is loaded into the music. Lobsanova’s adolescent tantrums are at times a bit too neat and tidy. Her swirling duets with Côté, particularly in the balcony scene where our romantic expectations are high, fail to tug the heartstrings quite like the classics. The chemistry between Lobsanova and Côté gets weak, especially in comparison to the exceptional chemistry between Romeo and his friends Mercutio (Jack Bertinshaw) and Benvolio (Skylar Campbell). The three friends’ masked dance before they sneak into the Capulet ball distinguishes itself from familiar versions through its humour more than through original steps. Bertinshaw shines as a Mercutio whose flamboyance never distracts from the sharpness of his dancing as he executes the difficult choreography with playful mastery. He is well-matched by Piotr Stanczyk as rival Tybalt, who makes fiery pride and anger visible in every bold step he dances. Juliet’s tottering nurse (Lorna Geddes) is another comic success for Ratmansky, though once again this character departs little from past productions. Ben Rudisin’s Paris, though not a comic character, is an amusingly off-putting fiancé for Juliet with the uptight nobility of a Medici portrait.

Renaissance art serves as the inspiration for Richard Hudson’s period design, reviving sixteenth-century Italian costumes with meticulous detail. Hudson’s well-researched fidelity to Renaissance style sets his design apart from past versions. Large, simple set pieces and expansive draperies complete a Veronese fresco by framing the detailed costumes and props. Big angular set pieces recall the rudimentary graphic perspective of Renaissance artwork. At the same time, Juliet’s huge misshapen bed and Nosferatu crypt give the stage a modern expressionist feel. Ratmansky capitalizes on this wide-open stage especially well in the street scenes by filling the vast piazza with movement. Among the crowds, there is none of the traditional Capulet-Montague colour-coding, allowing for better realism and convincingly chaotic fight scenes.

Ratmansky’s production may not be especially groundbreaking, but he has choreographed a Romeo and Juliet that stands among the greats. With Hudson’s design, this production can rival the classics, even if it does not deliver quite the same emotional impact. At a time when many ballet companies are struggling to bring a nineteenth-century art form into the twenty-first, this production skillfully looks forward without losing sight of the art form’s legacy. This has been a hallmark of The National Ballet of Canada under the leadership of Karen Kain, making Romeo and Juliet a fitting celebration of her fifteenth and final year as artistic director. 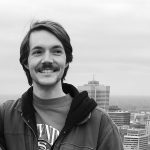 By Thomas Dobronyi
Read more by this author