A tragedy of errors, Shakespeare’s Romeo and Juliet follows the story of two young lovers who can’t seem to catch a break as all their plans crumble to ruins. On Wednesday, March 11, the proscenium curtain lifted on the opening night of The National Ballet of Canada’s Romeo and Juliet at the Four Seasons Centre. This curtain, which somehow manages to look both modern and period-specific, features a stunning royal blue pattern on a bright orange background. It provides the perfect introduction for this revived classic choreographed by Alexei Ratmansky, which holds its own amongst daring fighting, comedic tomfoolery and passionate romance.

Ratmansky’s choreography is cutting edge while keeping the classical beauty of the ballet alive. In the opening scenes, set in the city of fair Verona, the ballerinas wear shoes with heels, instead of the traditional pointe shoes, and throw themselves forward while smacking their heels on the floor as if they are being punched in the gut. This movement is repeated to signify strength, resilience and the aggressive nature of these spirited youth. The corps de ballet come together to perform lively choreography dappled with side curves, grand lifts and a building tension between the two feuding sides, drawing a parallel with the iconic dance section from Seven Brides for Seven Brothers.

Guillaume Côté and Elena Lobsanova reprise their roles as the star-crossed lovers and transport us to another time. They dance with the giddy excitement and the naivety of youth. Little do they know they are about to experience more than they bargained for. Amidst the action of the elegant sword fighting, drawing from fencing techniques, and the comedy and cartwheels of the players, the audience is drawn into a blossoming romance. The first pas de deux between the performers is breathtaking; they build an atmosphere of nervous excitement while Côté gently guides Lobsanova through simple lifts and turns. But the true magic occurs when Juliet takes off Romeo’s mask: they stare into each other’s eyes, unaware of the outrage driven by the music building around them.

The renowned conductor David Briskin effortlessly guides the orchestra through the suspenseful score by Sergei Prokofiev that fluctuates between airy sweetness and menacing strength. The opening notes of the orchestra lull the audience into a false sense of security while keeping them on the edge of their seats throughout the ballet.

In a surprising development, the orchestra uses ukuleles in Act 2 to support the reality of the simple yet regal stone castle envisioned by the Tony award-winning designer Richard Hudson. The simple outer scenery amplifies the extravagance of the elegant painted drapery within these stone walls and provides a perspective of depth customary of the Renaissance era. However, the brilliance of Hudson’s work lies in its subtleties, such as the smoke and flame of real torches that line the outer walls of the castle before the masque ball that Romeo and his friends decide to crash. And what a party to crash!

Benvolio, played by Skylar Campbell, and Mercutio, played by Jack Bertinshaw, provide plucky comic relief in this tragic love story. Campbell and Bertinshaw are the quintessential pimple-faced teenage boys, without the pimples. Their provocative hip thrusts and chiding gaiety are relatable, creating a mischievousness that sent embarrassed laughter through the audience.

In complete contrast to Bertinshaw and Campbell is the brooding anger of Tybalt played by Piotr Stanczyk. A commanding presence, Stanczyk enters the space, and the mood onstage abruptly changes. His brisk, sharp movements are captivating and powerful. In his role as the short-tempered Tybalt, Stanczyk draws the focus of the audience in everything that he does. He is a force to be reckoned with, and his ability to portray the anger and contempt of Tybalt is a precursor to what is to come.

Unfortunately, the magic created by the performers is lost in the iconic balcony scene. It is beautiful and the technique is flawless, but that is where the magic ends. There is no passion, risk or longing, and with such high expectations, this moment was a letdown. Lobsanova is up in the simple, unadorned balcony for only a short time before she goes down to dance with Côté in a light, frilly pas de deux of twirls and dainty lifts that seems to have no significance but to show off the performers’ talents.

After the disappointment of the balcony scene, Côté and Lobsanova redeem their romance in the final two acts as they throw themselves into each other’s arms, completing swirling lifts that defy gravity, their movements embedded with elongated reaches and frantic jumps illustrating their desperation. The rest of their performance is utterly chilling.

They say a picture is worth a thousand words, and Ratmansky’s choreography paints a beautiful picture of an ancient rivalry that defines a city. Through the power of Stanczyk, the whimsical theatrics of Bertinshaw and Campbell and the hopeful longing of Côté and Lobsanova, this tragic romance comes to life, bringing a sense of reality to the timeless classic of Romeo and Juliet. 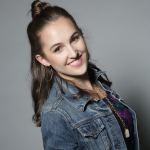 By Nicole Decsey
Read more by this author