MAI-Prototype was an installation presented by the Luminato Festival from June 13 to 23, 2013 in Toronto. An expression of visiting artist Marina Abramović’s method for creating and appreciating performance art, audience members moved through a series of chambers completing exercises and experiences based on the artist’s past work. I was very excited and, yes, somewhat nervous to experience what Abramović had designed for us.

Marina Abramović is a performance artist who began her career in the early 1970s by exploring the relationship between the performer and audience, the limits of the body and the possibilities of the mind. Her work often tests her own personal limits by challenging her mental endurance and she regularly opens herself up to physical pain and violence (which at times leads to a loss of consciousness, an event she also integrated into her work). In Rhythm 10, performed in 1973, the artist played the Russian game in which she jabbed a knife rhythmically between the fingers of her hand. Each time she cut herself, she picked up a new knife from a row of twenty and recorded the sequence. The piece finished when she cut herself with all twenty knives. In 1974, she performed Rhythm 0 where she placed seventy-two objects on a table and allowed the audience to use them in any way that they desired. Objects included a rose, a feather, honey, a whip, scissors, a scalpel, a gun and a single bullet. For six hours the artist allowed the audience members to manipulate her body and actions. Most recently in 2010, she presented The Artist is Present for which she sat silent and motionless in the atrium of the Museum of Modern Art  in New York for 736-and-a-half hours while spectators took turns sitting opposite her.

Ready to test my own limits, I bought two tickets to the 9:30 pm experience and was able to find some good company to join me. We went to Trinity Bellwoods Park at 9:15 to sign in and were given a program to look at. There was no ticket booth, just a Luminato volunteer who directed us to wait on a picnic bench beside the red, tent-like chambered structure. At 9:30, another Luminato volunteer dressed in a lab coat emerged with a clipboard and led us inside where there were lockers, four stools and a desk and all the walls and furniture were white. We were instructed to take off our shoes and put on the lab coats and silver moon boots provided. Once dressed, we sat on a chair facing the desk and listened to instructions (simple and clear to understand) and were given iPods, which were in sync with one another. Although we experienced the work as a group of four, we were told that it had been designed as a solitary experience.

The second chamber was empty except for a large screen. Abramović appeared on the screen and led us through a series of stretches and energizers, which I believe were designed to help us become more in touch with our senses, stretching our bodies, rubbing our hands together and then covering our eyes, ears and mouth. It was relaxing and I took the opportunity to open myself up to the next couple of hours in Abramović’s care, curious about how the time would pass.

The third chamber had four wooden stools for us to sit on as well as four pedestals. On top of each pedestal was a large glass jar filled with water and four glasses. Each jar contained a different coloured rock imbued with a different kind of power. Through the iPod, Abramović explained the differences between the rocks and their powers. One by one we selected a jar to drink from, stepped forward, poured the water into a glass and sat back on the stool. Once everyone had his or her turn, we sipped the water in unison.

The fourth chamber was called Looking Eyes Chamber. Inside, we found four tall chairs. I climbed up onto the seat, which was about waist height, facing my partner. The other pair of chairs was located behind my partner’s seat. Surrounding the chairs were alien-like stick figures. Crystals mounted at the top faced inwards and towered above us. On cue, we fixed our gaze into our partner’s eyes. My experience started off with giggles, but it didn’t take us long to get grounded in the moment. I felt calm: the other participants in the background faded away and my partner became surrounded in white. I began to see the chair change colours; the colours of the rainbow surrounded him, pulsed and shifted. His face, which was familiar, became unfamiliar. I noticed the shape of his eyes, mouth, eyebrows, hair, the brightness of the lights and the change of my focus. At times my mind wandered to the past and to the future; what I had done earlier in the week and what I was going to do next. I wondered how much of it he could see. Although the room was silent, I remember hearing something like a soft and changing drone. The lights began to flicker on and off, my partner became a shadow and then re-emerged, bright, colourful, still and composed. What I saw was beautiful and ever changing. I understood how Abramović could sit and look into the eyes of strangers for so long and why the mutual gaze was so compelling to her. There was more to see than I expected, more than I imagined. I left the exercise feeling exposed.

The fifth chamber was not nearly as intense. In the center of the room there was a large electrical machine and we were given long skinny tubular glass light bulbs. As we moved closer to the machine, the tubes became illuminated. We could all explore how the light changed as we moved around, I noticed that the light bulb dimmed where my hand met the glass and shone more intensely when in proximity to the machine.

In the sixth chamber we were asked to lie down on wooden beds with blankets folded at the bottom and a rock pillow. At first it was quite relaxing, but as the time passed, it became very uncomfortable. For the first time I became aware that I could be watched by the outside world and made my best effort to lie still. My back, neck and body tensed up. I looked for ways to find relaxation in my mind alone, determined to keep still and be a good participant.

In the final chamber we had the opportunity to write our responses to the experience we’d just had. Mine was a list of words, colours and shapes and feelings that I had experienced over the past two hours. The experience opened my sense of perception; it required me to look more closely at what I take for granted, listen to sounds that I often tune out, experience discomfort, endure it and allow it all to give me a new and different perspective. I think that the experience was a gentle introduction into the work of Marina Abramović. The experiences presented felt like the start of a journey towards a larger and more intense practice rather than an experience of the end result. Given her past work and the extremes to which she tests the limits of herself and others, I was expecting, and would have liked to have experienced, some moments that were more challenging, both physically and mentally. However, I believe that the experience gave me insight into the process by which the artist finds the stamina and reasoning behind her work. It motivated me to look at the things I see, hear, taste, smell and feel with a little bit more patience, commitment and trust knowing that I will find something different, new and unexpected; a welcome gift in both my art practice and in life.

The MAI-Prototype was developed in preparation for a more evolved and permanent institute dedicated to the presentation and preservation of long-durational work that Abramović is planning for the town of Hudson in upstate New York. 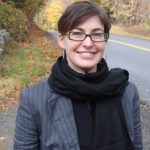 By Jenny-Anne McCowan
Read more by this author

Tagged: On the Ground, Performance Art, All