Scotty Mac is a freelance movement professional based in Toronto.

As a Pilates and yoga instructor, I’ve always had a passion for giving verbal feedback. I’ve never been a dancer, but I’ve often been compared to ballet teachers for having a particular eye for alignment.

Before we talk about anything, let’s establish there is no perfect alignment. Everyone’s body is different, so our understanding of concepts like “neutral spine” has to evolve. Teaching these days requires more openness and less of that sharp focus on certain angles and actions. Remember that learning doesn’t stop because you’re a teacher, and adapting for more bodies is important. With that in mind, I’ve compiled some ideas on how to teach when physical adjusting is no longer an option.

Get people moving before you give them too much instruction. Use a simple direction and layer on complexity after. Take pelvic tilting, for example: simple arching and rounding of the low back while lying on the back with feet planted on the floor. I start with just that, and once they do it a few times, I layer breath cues, then awareness of symmetry and eventually use the information to teach them to find neutral.

2. Focus on the centre line

A lot of the most effective adjustments come from the simplest movements. Let’s continue from the previous example when the student is lying on their back. Holding a block with both hands, the student reaches their arms towards the ceiling and then overhead, trying to hover them alongside the ears while keeping the rib cage on the ground. This increases shoulder mobility and core stability. With most movements, we are simultaneously moving away from (arms overhead) but also in the direction of (abs pulling in, spine neutral) centre.

Whatever I teach at the beginning of a class will have bearing on what happens later. The previous example could be a starting point for a class that includes bird-dog, child’s pose, planks, downward dog and maybe handstands. By the time we get to downward dog, students will have practised those actions a few times and I’ll just encourage the recognition and maintenance of that effort. I want you to get to the peak of class and realize how obvious it was based on what preceded and to feel empowered by your grasp of the material.

4. If grace is the aim, breath is the key

You have to breathe if you are to keep a pace. Moving faster has its place, but a large part of my practice involves moving slower and with more grace. When you teach, especially if you are doing the movement with the students, giving a bit of space for your own breath is integral. Choose a simple cue (“arms reach up, inhale”) and then you take a breath in yourself before you give the next cue (“hinge forward, exhale”) and you give yourself a bit of space to breathe out. You won’t quite get a full breath, really, but it will keep you from over-cueing and give your students space to breathe well.

5. Connect with the camera

Connection in this new online world is one of the biggest challenges. This may be Zoom-dependent, but I think it’s worth mentioning that people really like to be seen by the teacher. If you’re practising with them, once in a while get close to the screen and let them know that you’re there, even if some of them have their cameras off. And if you’re filming online content, talking to the “student” (the camera) like you’re there with them might just keep them that much more engaged.

This article was originally published in the Winter 2021 issue. 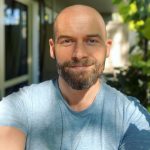 By Scotty Mac
Read more by this author