From January 15th to February 7th, three Montréal presenters offered several dance programs in both long and short formats on the theme of urban street culture, concertized. For the second year running Tangente has collaborated with Montréal, arts interculturel, and a third presenter, this year the Gesu, centre de créativité, to frame this particular theme in dance creation, which is emerging in the Montréal contemporary dance scene. The event happens under the umbrella title DNA: Definitions Non-Applicable, this year with the subtitle Urban Movements, Images and Sounds.

Dance styles explored over the three weeks included breaking, tap, gumboot, jazz, locking, popping, salsa and hip hop, all contextualized as a contemporary dance event. While each piece represented different perspectives on the interaction between the street and the stage, they could all be seen to emanate from the core premise, or challenge, that movement and themes from a specifically African-diaspora heritage can and should be explored on the contemporary stage.

One significant divergence from the theatre construct was Sarah Febbraro’s “Boom Box Revival”. Febbraro had her audience gather in Mai’s café, where she matched her accompanist DJ Lynne T’s spun music with her flashy tap dance moves and sounds combined. Through her big hoop earrings and exaggerated smile, Febbraro created a sense of play and parody, contrasting kitsch and skill. In a slow crescendo the intensity rose, until our bodily participation was elicited in the form of toe-tapping, hand clapping, whistles and shouts.

Febbraro and Lynne were not the only artists to elicit a vocal appreciation: the entire Mai offering was well received. K8 Alsterlund, presented three pieces “The Price of Light”, “Skate-Break” and “Zombie Rock”; Sophia Gaspard danced her solo “Jess Kom ou Dance For Your Right to Fight”; and 4Temps, a troupe of three women, danced “Flötablö”. The program was so well appreciated, in fact, that they had to add a seventh show to accommodate the demand.

Of these three artists, Gaspard’s piece stands out as a wide-ranging movement-theatre piece creating a series of character portraits relating to the Black experience. Gaspard manifests a powerful stage presence in her expressive, muscular body. Inspired by lectures and music by political artists, this piece was a cultural history lesson brought to life in movement and voice.

In contrast, both Alsterlund and 4Temps’ works took a more formalist approach, focussing on movement in space. While demonstrating a mastery of airborne and rhythm-bound moves Alsterlund (aka b-girl Lynx) clearly pushes boundaries by warping traditional elements of the urban dances. In “The Price of Light” she begins with slow motion popping. The softness to her b-girl moves gives her the quality of floating through space, and us a sense of anticipation, of luxuriating in the potential we know she can unleash. In “Skate-Break” Alsterlund brings another element into the mix: the skateboard. Again the movement is constrained, controlled. Forty Nguyen (aka b-boy WD-40) dances this piece, which is stylized and choreographed, not impulsive and improvised like the movement typical to skateboarding. Still showy, these moves convey a sculpted precision that reveals Alsterlund’s approach to creating for a theatre setting.

4Temps presented “Flötablö”, a primarily choreographed piece, with moments of individual improvisation. While there was little movement invention outside of the standard street dance moves, the piece had sophistication in its formal use of space and the dancers established a clear rapport with the audience.

Formalist concerns are central to Nicholas Leichter’s two pieces, “Never End” and “Free the Angels”, presented at Tangente. Both lyrical and rhythmic, his pieces re-mould jazz dance in an engaging and contemporary way. Through syncopated hips, undulating spines and quick level changes, the dancers express a vibrant physicality with a driving force to the end: bodies in motion, tracing complex patterns in space; fast-paced, energetic pathways within the kinesphere; bodies interacting and partnering through smiles and lifts. The movement was infused with rhythm to match the jive-y pop music that accompanied them.

Presented at the Gesu and indicating a promising use of space and staging, Serge Takri’s piece “Yenendi ou les dieux de la pluie” begins with the whole theatre occupied and enveloped by voices resonating in a cappella harmonies. In a procession, the performers descend the aisles on either side of us, pass onto the stage and beyond our view while their singing continues. In a narrow space framed by the stage curtains, a masculine solo in shadows of blue light imparts a mystical, pre-dawn feeling — perhaps a premonition. This two-part prologue sets the scene in Africa and reinforces the parable-style choreographic structure. We expect to be told a story, and if I got it, it was on a visceral not a mental level.

Aurally speaking, I enjoyed the interplay between spoken words, words sung in choir, solo chanting, recorded music and soundscapes. Visually, Takri alone steals the spotlight with his exquisite explosions of minute and expansive body movement, surprising me with what seem impossible but beautiful combinations and contrasts. His dancers, however, pale in comparison. Originally from the Ivory Coast, Takri is thoroughly trained in many African dance styles. Initiated at the age of six into a traditional mask dance, he studied at the Kaunan dance school directed by his mother. In contrast, his dancers are visibly trained in western dance technique, and did not convey the same bodily integration of Takri’s movement style.

One exception to this statement was the dancer Ghislaine Doté, who also performed a self-choreographed solo entitled “Performance” at the beginning of the program. Here we saw a more abstract integration of African and western techniques in her angular yet fluid, athletic and precise movement.

Takri’s work is the hardest fit within my understanding of the DNA event being about contemporary urban dance. Perhaps a stereotype, the Africa that I saw in this work seemed more rural than urban, except in the moments of more club-style dancing when the music picked up in tempo. However, if we take the term urban dance to mean dance created in cities or towns, what dance couldn’t be included? While the event title resolutely resists categorization, it seems that this event is trying to give voice to a certain marginalized youth culture, unified under the rubric of hip hop. In that case, referencing dance styles that have fed into that culture — from jazz to tap to African — is completely valid. In this sense, I can appreciate the eclecticism of the event.

The question of clarifying the definition or boundaries of the event is only one issue that this series of performances raised. For example, a few audience members expressed their opinion that break dance was better (off?) in the clubs — better as in more spontaneous, more true to the dance, more appropriate. In the theatre, they said, it seemed stiff, fake.

Only two years young, this event has a young vision, and the pieces (to varying degrees) represented primarily young artists. On one hand this is a criticism, on the other hand it is an acknowledgement of an aesthetic based on rebellion, reinvention and vitality. The continuous clapping after the Mai show was “officially” over conveyed appreciation, but also a desire to see the artists improvise; which they did, inviting the audience to join in. For me this made a bridge between the performance and the personal expression inherent in hip hop dance — closing the gap between our watching and our own dancing, between passive reception and active participation. This relationship and the opening of possibilities that this experience inspires work to push the definition of theatrical performance itself, into a space where definitions are indeed difficult to apply. 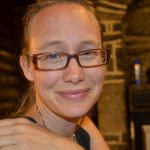