It’s been said that placing classical music in a performance will bring it instant cultural value. It’s a device often used in dance and performance milieus. However, in contemporary dance it can be a problematic choice, as the work will undoubtedly inherit the cultural context of the classical reference and challenge the contemporaneity of the dance. With Daniel Léveillé’s creation Solitudes Solo, he incorporates the violin sonatas of Johann Sebastian Bach — works that are considered to be responsible for establishing the technical capability of the violin as a solo instrument.

The choreography is a series of consecutive solos performed by incredibly talented dancers: Gaëtan Viau, Mathieu Campeau, Esther Gaudette, Justin Gionet and Emmanuel Proulx. At times matching the music’s sophistication, the repetitive choreography displays a keen understanding of fundamental body mechanics and how weight can be utilized with stunning efficiency. Otherwise Léveillé does not pursue (and most likely purposely avoids) a conversation between the dance and music. The two live in separate time frames and there is little conversation between them. It’s an approach that serves the work well for the majority of the show. The music, while undeniably hypnotizing and sophisticated, often becomes elaborate wallpaper behind the virtuosic athletics at work: the atmosphere is something like watching brute gymnasts at Olympic tryouts located in an austere classical music conservatory. Emotions are in process but firmly suppressed. There are periods of silence with Bach sonatas spread throughout. Emphasizing the physical, the dancers arrive onstage wearing a variety of tight underwear. The lack of full nudity in this work (by a choreographer known for his full-frontal group works) is refreshing.

Centred onstage, a large white square serves as a plate for solos that are primarily studies of a body’s capacity to drop, hold and pick up weight. Each solo contains similarly stark, athletic gestures followed by held positions. Leaps fall into sustained drops of weight, and postures reminiscent of yoga burst quickly into arm gestures that recall early modern dance. The weakest aspect of the work is that there is little dynamic change from one solo to the next. Because of this, variations in the dancers’ interpretations stand out, perhaps more than intended.

The subtlety of the dancers’ facial gestures and differences in their use of breath and timing bring “identities” to each solo. While all the dancers are talented virtuosi in this demanding work, Gionet and Viau are particularly outstanding in their interpretations. Their performances are perfect balances between calm neutrality and athletic precision. The dramaturgy is most cohesive when they are onstage. Indeed there are several undeniably strong performances by all the dancers in this piece, but overall the dramaturgy of the work seems unresolved. Too often the romanticism of the heroic dancer, celebration of the ideal body and the drama of Bach’s sonatas derail the otherwise stoic aspects of the performance.

The choreographic direction is not radical enough to bring a cohesive proposition to the show. This is most problematic in the solo performed by the incredibly talented and beautiful dancer Esther Gaudette (the only female performer), who appears topless. Navigating the subtleties of gender politics is apparently of no interest to Léveillé, but the history of the objectification of the female body in particular is not so easily forgotten. The voyeuristic aspect of naked breasts and muscular men in tight underwear is swept under the carpet in this work, as if it’s not part of the attraction. However, it’s undeniable that the muscular naked body’s “market value” has contributed greatly toward this choreographer’s mainstream success.

The final solo is, quite surprisingly, accompanied by Israel “IZ” Kamakawiwo’ole’s ukulele version of the classic song Over the Rainbow. It’s a dramatic departure from the otherwise full hour of Bach and periods of silence. This last solo by Viau is slightly more brutal, including violent drops to the floor, but otherwise changes little from what has come before, so the choice of this sweet sentimental song as the ending seems odd. But its positive emotional impact casts a warm mood across the room and the piece finishes on an optimistic note.

With our May/June issue themed around nudity in dance, we thought it would be interesting to take another look at Solitudes Solo by Daniel Léveillé as part of our ongoing Festival TransAmériques coverage. Click here to read a previous review by Philip Szporer. 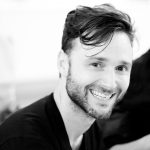