This begins a long time ago, so be patient.

It is late January 1973, and the London premiere of Samuel Beckett’s “Not I” has opened at the Royal Court in Sloane Square. A modest audience sits in the small theatre with the house lights at half and the stage in complete darkness. They chat, as audiences do before a show — that pleasant hubbub that precedes the confidently expected beginning: the auditorium will go to black, lights will come up on the stage, an actor will appear, the play will be set in motion.

Only, none of this happens: the stage remains dark and the audience keeps talking, till eventually one voice, indistinguishable at first from the ambient chatter, seems to dominate and we realize the play has already begun. In fact, the stage is already occupied. Floating in the darkness and lit by a gradually intensifying three-inch diameter spot of light, a mouth is speaking, and has been for some time.

The words become intelligible, but their meaning and drift do so only gradually, in fits and starts, animated by some inner obsession — to confess, to deny, to evoke a fragmented personal lyricism and then to abandon it, the whole broken monologue punctuated by the phrase “not I” repeated again and again.

That’s Beckett for you, you say, and yes it is.

What’s so interesting though is how the audience fits into all this. The voice emerges initially from our own fragmented and inter-layered conversation. Even as the play begins there is no actor we can see on the stage, only a speaking mouth to set against the reality of the audience. What becomes of the viewer’s subjectivity and of the objective reality of a supposed world of the play when a non-existent actor keeps saying to the audience “not I”? From whose subconscious is the compulsive stream of language coming? If the viewer insists on the safety of theatrical convention by replying “not mine”, he obviously implicates himself even further.

The genius of the play is that it re-defines the most fundamental theatrical assumption about the identities of actor and viewer.

Now, fast forward to November 14th, 2007 — the first programme in Dance In Vancouver’s series of showcases at the Scotiabank Dance Centre. We have already had an excerpt from The Whole Beast by battery opera, and the evening will end with another, from The Vision Impure by Co. Vision Selective/The Holy Body Tattoo.

In between these, Sarah Chase walks out onto the stage.

The house lights remain on. No theatrical lights come up. No music begins. She is wearing jeans and a sweater. She says hi to the audience, and tells us how nice it is to be back on the West Coast after living for many years in Toronto. She talks about her home on Hornby Island and some of the ideas she has had while working on new choreography on the beach near her house.

“Oh, we get it,” we say to ourselves, “this is not going to be a dance piece but somebody talking to us about work-in progress. Well, okay. We can relax with that.”

She is interested in certain mathematical concepts, she tells us, like the properties of sequences. For example, she illustrates, if you start with three separate gestures with the left arm and two gestures with the right and perform them simultaneously in sequence (thus 1-1, 2-2, 3-1, 1-2, 2-1, 3-2, 1-1), it takes six pairs of gestures before returning to where you started.

She tells us she moved on to considering the twelve signs of the Chinese zodiac and the five Chinese elements. She shows us twelve separate gestures with the left arm, corresponding to the zodiac, and five gestures with the right arm for the elements. “It will take sixty pairs of movements to get back to the beginning.” And she starts moving and speaking: “Metal-Rat, Water-Ox, Wood-Tiger, etc”.

We are intrigued. This is more complex: she needs to create sixty separate movements, each made up of two pre-established components, while speaking the names of the sequence. We admire the concentration and skill, but of course this is still not dance.

When she’s done, she tells us that recently it has occurred to her to explore a third dimension to these sequences of mathematically constructed movement: movements with the feet. She shows us the components of a new sequence, left arm, right arm, feet — the sequence of combinations will require many hundreds of iterations to complete. Amazingly, she starts.

The combinations take her all over the stage, and start to look remarkably like dance as we normally think of it.

But what exactly does that mean? We see a grace in movement, we see the elements of lyricism, we see fluidity of the body as it moves from gesture to gesture.

Surely none of this is real; this is merely mathematics. Lyricism comes from within, from the emotion the dancer and audience invest, from an inner sense of the body and its innate energy and equilibrium and disequilibrium. Expressive dance cannot come from mere formalism. Even Bach’s children eventually gave up on the intricacies of his fugal structures, and the eighteenth century ignored his music altogether in favour of the denotative grammar of classicism.

And yet we are intrigued. What powers of concentration Chase must have to pull it off!

Then, as if that weren’t enough, she starts to tell us a story. Against the background of the complex sequence of movements, she starts in on a very quiet, very understated narrative of an old man she met who had suffered a neurological injury that left him with the loss of half his visual field. We listen to the story, told to the rhythm of Chase’s breathing synchronized to the complex dance she continues to perform. Hearing the story is like reading Oliver Sacks describing one of his patients — the same amazed wonder and the same quiet compassion for the existential peculiarities of the human condition that neurological loss brings to light.

We listen to the story and we watch Chase’s movement. Like the old man, we now face two elements of our own perceptual engagement that struggle to be united into a single experience. What do we seek? A fusion of the mathematical and the human, of form and expression, of object and subject? All of these, and none of these.

It seems to me there is a false dichotomy in the arts in our time — in dance as well as in writing and visual art and film — between lyric and postmodern versions of things. The lyric vision, so the story goes, sees art as fundamentally an expressive project, a way of capturing human subjective experience in some tangible formal matrix. Postmodernism, which denies the reality of subjective experience independent of the conventional codes of its supposed articulation, sets out to deny and fracture and deconstruct anything that smacks of expressiveness.

Neither version moves us forward.

What Chase’s performance achieves is something far more important and far more radical. It relocates the space where dance takes place to an existential common ground between performer and audience. Just as Beckett’s play has as its subject matter an interrogation of just where subjectivity is located between actor and audience, so for Chase it seems, the project is to create a dramatic dimension in which formalism of movement and the sympathies of our common humanity become, not vehicle and tenor of metaphor, but one and the same thing. The creation of this remarkable dramatic space (the final step of the mathematical sequence if you will, or the perfect closing physical gesture) is clinched in the last line of her story about the old man. I cannot possibly give this line away here, but there will be opportunities to experience the whole work (to which there are more elements than I have described here) shortly. The piece is being developed for three female dancers and is due to be premiered later this year.

I hope the final version retains the Beckett-like purity, subversiveness, and dramatic genius that we experienced in Vancouver in November. If so, it will be a remarkable work. 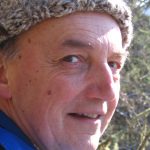 By George Sipos
Read more by this author