Double Murder: Clowns/The Fix premiered at the Vancouver Playhouse on Oct. 21-22, presented by DanceHouse. It will be in Toronto Oct. 27-29, in Montreal Nov. 2-5 as part of Danse Danse and in Ottawa Nov. 9-10.

Choreographer Hofesh Shechter creates vivid worlds onstage, drawing the audience into his imagination. He plays with our emotions, getting us to feel what he wants us to feel. Hofesh Shechter Company’s double bill Double Murder shows us two views of humanity: the first bitingly sarcastic and the other sincere.

The evening starts with the cast of Clowns running onstage screaming, tossing confetti and dancing to the cancan. With a flash, the lights go out. We open onto a hazy backlit scene and the thick smell of smoke. Hanging bulbs, footlights and a blood-red velvet curtain tell us we’re in a theatre. Light falls on the dancers’ faces the way children hold flashlights under their chins to tell ghost stories.

The clowns kill each other in gruesome ways, then turn and bow or hold out their arms, awaiting applause. Despite their showboating, they seem strangely indifferent to the violence they’re inflicting. Their brutal performance exists only to entertain us.

Rhythmic gunshots fuel this macabre dance, full of sarcastic spirit fingers and menacing shimmies. The dancers move to a relentless drumbeat like corpses held up by puppet strings. The dissonant spectacle is deeply disturbing and yet highly entertaining, a perfect show for the weekend before Halloween.

When the murderous jesters come forward to bow, the audience erupts into applause. They continue bowing before showing vignettes of movement and stillness as the lights turn off and on at least a dozen times. The audience’s excitement fades a little more each time.

After the intensity of Clowns, The Fix starts off slowly. From the back row, it’s difficult to see what the dancers are doing on the dark, hazy stage. They maintain some distance from the audience, their backs turned, their energy directed inward. The dancers jostle, shake each other and scream into the void in slow motion.

The second work of the evening was created following COVID lockdowns and reflects the frustrations we all felt in those early, pre-vaccine days of the pandemic. It’s hard at first to feel engaged with this cold and distant world, but perhaps that’s the point.

Recycling some choreography from Clowns, The Fix has a pulsing white noise soundtrack that could be thought of as a lullaby. Eventually, a sweet guitar song draws the dancers together and the healing process begins. The lights become warm, and the dancers seem content.

They begin to dance, then howl softly as they form a tight-knit pack. Schechter emphasizes the importance of physical touch to bring people closer together. Once they are relaxed and happy, their world opens up to include the audience. They invite audience members to accept hugs that seem genuinely warm and soothing.

Instead of a formal bow, the dancers wave goodbye to the audience and we wave back, feeling like we know each other.

The two halves of Double Murder complement each other, but not in the way you would think. After the morbid high of Clowns, The Fix seems quite low-energy, but Shechter uses this distance to pull us in closer by the end. He set out with the goal of leaving the audience with a sense of hope. He achieves it. 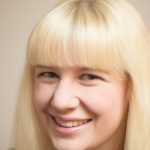 By Kristen Lawson
Read more by this author