On Saturday, June 13, online audiences experienced a new form of virtual performance, curated and presented by Edmonton’s Mile Zero Dance. Garden Party featured eight dance performances from around the world. Seven of these presentations were pre-recorded dancefilms, with one live improvised duet streamed from Japan. The event included several fundraising perks including the sale of a still life painting done by Jennie Vegt during the two-hour show.

Garden Party brought together dance artists from around the globe, each with a different approach to structure, tone and sentiment in their work. As a viewer, I found myself attracted to the variety of expressions and particularly enjoyed the performances that brought light and levity to our communal experience. Live musical interludes wove a kind of magic through the event as Wendy McNeill shared her accordionist chops and her lilting voice from within an exquisite garden space in Spain. The host, Piet Defraeye, tied the performances together with introductions and the occasional reference to botany and home gardening.

Louise Moyes performed the most entertaining “lockdown” solo from within her home and garden. Her film invites the audience to reflect on the strange ways we’ve been making use of our time during the pandemic. She says, at one point, “I convinced myself [my] living room was a dance space,” and we watch as she moves carefully between coffee table legs and couch arms. The film shifts and we see a figure lying under a colourful cloth on a well-manicured lawn, cradling a rake to the sound of heavy metal music. In the next cut, she is alive, moving, raking in full force, adding flamboyant gestures of air guitar that take her spinning through the landscape. We are brought to life with her in this dance of pure abandon and childlike joy. The comments that came streaming in after this performance were testaments to how much we all must have needed this moment of whimsy.

The live improvised duet between Hideo Arai, dance artist, and Satoko Nakamura, voice performer — both based in Japan — explored the overlap of performance, technology and ancient landscape. Arai’s physical interactions with gravity reverberated viscerally through our screens as he performed on the steps of a Tokyo Shinto shrine. I could feel the fall and release of each footstep on the stairs. Nakamura’s dynamic voice modulations performed and looped overtop of Arai’s movements offered a compelling and focus-driving soundtrack to what could at times be a disorienting view from Arai’s camera. The uplifting piece came to life through the screen despite the great distance.

Edmonton-based Creeasian presented a revitalization of Indigenous culture with current technology and dynamic exchange. The multidisciplinary artist brought a whole new level of contemporary dance aesthetic to the event with a performance that combines Indigenous grass dancing and bboying set to the artist’s own beats. Presented in a sunny, lush green space, the performance was seamlessly edited to cut between the artist dancing in his traditional regalia and as a contemporary bboy. His vibrant energy flows easily from camera to screen. This performance, too, was an uplifting experience and brought the old and the new together in a contemporary format that could be appreciated across cultres.

If we choose to see Garden Party as an example of the level of live performance we can expect from established companies until we can gather safely in theatres again, then we can be hopeful that dance is moving us forward and that the effects of the pandemic are bringing us together in new ways. Dance will survive, as it has done for generations, and dance performance will continue to evolve as Mile Zero Dance has so eloquently proven in its global garden party for the ages. 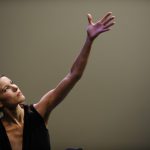 By Olivia C. Davies
Read more by this author