“It is sometimes in the aftermath of our crossed paths that we discover what a shared experience really is. Five years ago Jennifer and I met, for the creation of “Then one day”. But who knew back then that we had already started to work on this solo? Perhaps, only her instinct did – that singular private part which recognizes the nature of desire and dares to defend it. Now, between who I remembered and who I met again, there seems to be a panoramic perspective of changes. These stand between here and now.”

The KemiCollective, a project initiated and led by School of Toronto Dance Theatre graduate Jennifer Dallas, exemplifies an embrace of an “other” culture through dance. It also reflects the challenges inherent in integrating an adopted form with one’s original dance background. In this case, the embraced dance culture is that of Nigeria. The attraction is certainly understandable: indigenous dance forms tend to reflect a connection with the lives and environment of the people who participate in them. There can be an immediacy not always found in concert choreography. Parsing such distinctions is beyond the scope of this review: suffice it to say the issues and intersections are complex and fascinating.

Titled between here and now, the presentation by the KemiCollective consisted of three pieces. They included a solo for Dallas with choreography credited to Marc Boivin, a short film, and a group piece choreographed by Dallas and danced by seven women (Mor Bar-Zakai, Emma-Kate Millar, Simi Rowen, Jade Sakamoto, Erika-Leigh Stirton, Krista Posyniak and Janine Sicotte). This review will focus primarily on the solo.

The film, “Lagos No Shaking” provided glimpses of dance rehearsals that Dallas participated in while studying and performing in Nigeria, and a bit of commentary about the state of dance in that country by Adedayo Liadi, the choreographer/artistic director with whom Dallas studied. This was rounded out by street scenes of Lagos viewed from inside a moving car, all presumably to provide some context for the live dancing that made up the main part of the program: the film could not have lasted more than five minutes.

Judging both from the solo “between here and now” (also the name given to the evening) and her group piece, “Cinque”, Dallas has had some success in assimilating elements of Nigerian movement. In fact, there were such similar elements in both dance pieces that I was curious as to what roles the “choreographer” and the “performer” played in the creation of the solo. Sometimes this relationship can be highly collaborative, blurring the lines between roles. Knowing that Boivin is a generous and respectful teacher (as well as a highly acclaimed interpreter/dancer), I suspect he was open to Dallas’ creative contributions.

In both works, some of the most distinctive sequences involve the initiation of movement from the pelvis, spine and entire torso. Impulses radiate outward in various directions to and through the extremities, creating fluid forms and shapes in the process. The effect is of an articulate sensuality, an unfettered kinesthetic expression. The sinuous flow of movement is disrupted, by arbitrary flicks and flings, slices and slashes, of legs and arms.

The problems arose when this discordant vocabulary was introduced. If a dance piece proffers itself as contemporary, must it include a requisite amount of standard, over-exposed, “modern” vocabulary in order to be considered valid? In this instance, I would propose not: the integrity of the movement is weakened by the impositions of arbitrary, apparently un-related gestures. I wonder too if there were temptations both to demonstrate technical prowess, by way of high kicks and sudden movement departures, and to include (too) many ideas. It takes time, experience and courage of one’s choreographic convictions to be simple. But the reward is clarity of vision and its effective transmission to the viewer. With many a choreographer, too many tricks and favorite movements get thrown together in one work, inevitably muddying the waters and sabotaging one’s purpose.

Despite some of these same issues, the solo for Jennifer Dallas, ascribed to Marc Boivin, had some lovely elements. The piece begins quietly, compellingly, the dancer gesturing delicately. Movement generates from her pelvis and torso, mobile and casually sensuous. She stands under a single overhead light: it creates a cool pool that just barely surrounds her. Beyond, there is darkness. There is containment in her space, yet no sense of confinement. The lack of locomotion is not an issue.

But the dancer leaves her spot anyway. She departs into the darkness, travelling in a half circle, heading upstage right and then returning to centre and to the light. She begins another sequence of movements on the spot. Many are recognizable: they are repetitions, or perhaps variations, of what was presented before. Then off she goes again, following the same semi-circular path, returning to centre, moving in place. At this juncture, I begin thinking there might be a pattern at work, that the movement is an accumulation structure. However, I was never sure of this. The movement does not clearly follow a linear development, though there may have been some semblance of one. Dallas dances this travel-and-return-to-centre journey a number of times. The flow has already been interrupted with the afore-mentioned conventional “modern” movements, which have been appearing for a while.

The tempo picks up and the soundtrack evokes a gathering storm. More movement is layered on; it looks more complicated, but less evocative. There is no clear path toward increased momentum, build or progression. My absorption has diminished, and a certain resigned weariness hovers at the edge of my consciousness. My analytical mind has begun to surface. I begin to question what is going on, and why. The piece is feeling long, and its earlier fluid character has diminished. I’m wondering about the purpose of keeping all the action on stage right. I’m puzzled by the repetition, and then by the changes that finally do occur: instead of always heading upstage and coming back, several times Dallas reclines, her back to the audience, beneath a black back-drop or scrim of sorts which extends about a metre above the floor.

Dallas eventually does move to stage left in the latter part of the dance. An image introduced there for the first time seems distinctly Nigerian-inspired: she stands in profile, undulating her pelvis and projecting her rib cage extremely forward and back again. The arresting nature of the movement was undermined by its random introduction into the choreographic proceedings. By the time the piece ended, it had been going on for roughly half an hour. The conclusion just happened: Dallas walked off stage right, passing through the pool of light in which she first appeared.

It remains clear that Dallas has effectively integrated Nigerian movement elements into her dancing. The sinuous, undulating waves suit her, and vice versa. She is an expressive and articulate dancer, with a generous physicality that evokes a satisfying resonance. The pleasure erodes when the deviation into familiar gestural vocabulary takes over. When the movement impulse departs from the core and she flicks her arm or flings her leg up to ear level, the piece suffers.

This evokes the question again: what is the connection between the two chosen movement forms? Why the juxtapositions? If they are meant to illustrate the concept of “between here and now”, what would make this translate more effectively? Even though the piece is credited to Boivin, I have the distinct impression that much of the movement material came from Dallas. While I can’t say for sure, I feel that ultimately the clarity of intent was obscured.

Who knows what all of the reasons are, that lie behind the mixed effectiveness of a piece? So often, less-than-optimum results can be blamed on the usual suspects: lack of time and money. These limitations are not likely to disappear, but there are options: among them a perceptive edit. It is difficult for many choreographers to discard material. Yet it is the ultimate necessity. Vigorous pruning works for plants, and needs to be applied frequently to choreography. Succinctness over variety, and the edict “leave them hungry for more” can only benefit a work such as “between here and now”.

I look forward to seeing further developments in the choreographic work of both Boivin and Dallas, whether separate or together. I applaud passion for dance, whether from a “discovered” culture outside of one’s own, or that of one’s birth. Intersections between the two aspects can be risky, but well worth the journey: there were glimpses of future accomplishment in the works presented on this program. 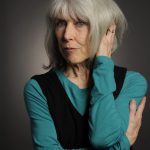 By Terrill Maguire
Read more by this author