Live Art Dance Productions puts on shows that are just that: Art. Live. Dance. And, like so much of art (and of life), unexpected juxtapositions can change what you perceive. The May-December pairing of the Mocean Dance premiere of Canvas 5 x 5 and Claudia Moore’s Dances in a Small Room, Parts I and II at the Dalhousie Arts Centre Dunn Theatre was a study in contrasts, each revealing a lesson for the other.

Part I of Dances in a Small Room was Tedd Robinson’s lone some. It opens with the male and female forms of Moore and dancer Dan Wild, their backs to the audience, holding hands and vibrating. Cyndi Lauper sings Smokey Robinson’s “Really Got a Hold on Me”, the words of the song a literal echo of the movements the dancers make. It is theatre. But it’s melodramatic – images of a bird (Moore) escaping from a cage, the couple reaching for each other and then tearing apart, as Lauper sings, “I don’t like you but I love you”. The piece portrays loneliness, but it is the unsubtle variety, the kind you want your lover to notice. Wild’s ‘man’ seems to be there as a foil for the woman’s self-exploration. He approaches her repeatedly, but this is her dance, and she is busy with frenetic movements that speak of household chores. Ignored, he eventually leaves, wandering out of the square of light that delineates a room, and leaving her to dance alone to the Ricki Lee Jones version of Paul McCartney’s “For No One”. Again, the music leaves little to the imagination, as Jones croons: “No sign of love behind the tears, cried for no one, a love that should have lasted years.”

On the cusp of sixty, Moore has attained the quiet quality of presence found only in real masters of an art. Her movement is sculptural and controlled, even in the wriggling-punctuated activities that preoccupy her in Robinson’s piece. When she raises her arms outstretched, they are perfectly placed arms, her actions in fact so finely wrought that it is difficult to believe that her “woman” craves anything, let alone a love lost. It is ironic that the desperation of the story behind the dance might ultimately have been better served by less perfection in the dancing.

Where Part I is dominated (and made tragicomic) by its soundtrack, Part II is just the opposite – heavy in its breathless silence. James Kudelka’s Half an Hour of Our Time is performed entirely without sound, save for the ambient noise leaking in from the lobby next door.

Like Robinson, Kudelka has honed in on Moore’s extraordinary gift for stillness. The piece opens with a series of snapshots, the lights going to black between each tableau of Moore paused sculpturally on a banquette. She looks out searchingly, deep in thought and is then joined by her lover (portrayed again by Dan Wild). The piece depicts the complexities of intimate relationship, the partners coming together and falling apart, letting the audience bear witness to the ebbs and flows of their desire and distrust. Moore pushes away, Wild catches her. They wind around each other. Anyone who has been in a mature relationship will recognize the truths in the piece: anger, aggression, passion, boredom, complacency and companionship – Kudelka exposes it all, in a squirm-inducing half hour. The pair onstage is an uneasy match – Moore’s character a touch too regal, self-involved, emotionally unavailable; Wild’s dance revolves around hers – looking down, eyes shaded by his shaggy hair, or looking towards her, the woman who is always one step away. Even in his rare solo moments – a sashay across the stage, a couple of turns – he is performing for her, not us, and this serves to increase the discomfiting sense of looking in on a couple’s private room.

The characters portrayed may be ill-matched as romantic partners, but as dancers, the contrast is balanced – Moore’s small frame and sheer speed of movement take her from stillness to stillness. Wild is much heftier, and his dancing more languid, but he meets her airy energy with his gravitas, moving with the same lithe quality and astounding accuracy of movement. The nods to a sexual relationship (Moore and Wild entangled on the banquette; Wild grasping after her body) were a bit limp, and I wondered if the quiet control of these two masters served to take the fire out of their dance. I would like to see them perform it again, drunk.

Where Dances in a Small Room is exquisite in its containment, the audience-friendly Canvas 5 x 5 is explosive and fun, if a bit … unripe. Choreographer Robinson and Mocean Dance take full advantage of costuming and props in this piece: in a striking entrance, the dancers, Jacinte Armstrong, Ruth-Ellen Kroll Jackson, Rhonda Baker and Suzanne Chui, emerge clad in what appear at first to be full-length white gowns, with unwieldy slabs balanced on their heads. The gowns later resolve into sheets of canvas held by the dancers – elbows pressed against their sides – over black velvet tube dresses. Their forearms outstretched with the formality of a court dance, it could be Japanese, or it could be Baroque. In this “could be” is the relief of the piece: unlike the clear, uncomfortable message of Dances in a Small Room, Canvas 5 x 5 is peppered with tableaux that evoke very different images in each of us. It could be anything.

As in lone some, Robinson treats sound as structure, using different pieces of recorded Celtic music to carve out episodes in the overall work. In each, the dancers play with their canvas sheets and with the slabs that have turned out to be painters’ canvases stretched across a frame. They dance upon the sheets like conquering heroes; tie themselves up as if in a straitjacket; balance the frames on their bodies; or throw the crumpled sheets at each other in a kind of large-scale snowball or pillow fight. The sheets soaring through the air could also read as swishes of paint flying towards an artist’s canvas, and indeed the entire work has a Jackson Pollock–like quality as if Robinson and the four dancers are throwing images out to the audience to see what takes.

When it takes, it is stunning – a moment where the dancers have wrapped their heads and faces in canvas, and rock back and forth balancing on the painters’ frames is both beautiful and creepy; when they gather around one dancer to build a costume out of canvas, transforming her into a queen, it is magical. In the hands of one dancer gifted with an arresting quality of attention, the act of pulling a sheet piled with frames stacked like a house of cards, is so careful, we too are surprised when it collapses triggering her subsequent fall (and apparently death, as she is immediately shrouded with canvas by her colleagues). This image is so lovely, it need not be repeated. But it is, twice more, by different dancers – in the process losing the tension that made it engaging.

After the emotional intensity of the Dances in a Small Room, the audience was audibly relieved to watch Canvas 5 x 5 – laughing, and tapping their feet in time with the music. In the moments where the choreography risked being too “Maritimey”, the dancers handled themselves well, performing a contemporary twist on the dance of the Irish washerwoman, even whacking their sheets of canvas against the floor as if beating the dirt out of clothes. When they rode on canvas across the stage as if gliding on ice, I wished I were there too, playing with Mocean.

The piece reads like an ensemble creation, crafted collaboratively through play and improvisation; Robinson keeps a light touch at the helm, never letting the choreography get too bogged down in symbolism. There are a few self-mocking touches that I hope were meant as jokes for the Halifax audience – dancers running across the stage with tartan sheets sailing out behind them like giant flags got a good laugh; and the appearance towards the end of a lone bagpiper elicited chuckles and a few “ohmigods”. The sounds of the bagpipe were a lovely complement to the recorded Gaelic singing they accompanied, but the dancers’ (and the piece’s) lack of engagement with the piper himself made it seem that he’d gotten lost on his way to a céilidh.

It is perhaps unfair to watch Mocean Dance back to back with Claudia Moore – she is a master of her craft, and her dancing defines precision of movement. Armstrong, Kroll Jackson, Baker and Chui have come together as Mocean specifically for this piece. Canvas 5 x 5 is brand new and uneven, and it will take time to get the props to behave exactly as they must in order to consistently evoke the images that, when nailed, are so compelling. But Moore could take something from Mocean, too; their dancing is unabashedly passionate, joyful and raw – their performance as genuine as it is unpolished. 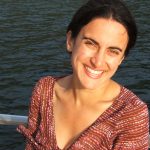 By Munju Monique Ravindra
Read more by this author