November 7 at Flato Markham Theatre, Markham
Four days prior to the debut of Sampradaya Dance Creations’ MANDALA, four Tibetan monks gathered at the Art Gallery of Mississauga to produce a sand mandala. They pored over a patterned sheet surrounded by fine tools and brilliant shades of pink. Native to various Buddhist and Hindu traditions, the mandala is a composition of sacred geometry designed to reflect the vast complexity of the cosmos. A central part of this laborious creation process is the awareness of its imminent destruction. It is this meditation between art, labour and transcendence that Sampradaya strived to capture in its thirtieth anniversary production, MANDALA, choreographed by Lata Pada and Suma Nair.
The second performance of MANDALA, in Markham, Ontario, occurred during the city’s first snowfall of the season. It begins by revealing a curious stage design: a staggering projection screen in the shape of a mountain’s peak, six gold pots placed up front and a single wide-brimmed pot at the centre. The live orchestra is composed of a vocalist (Saibruntha Arunthavashanmughanathan), violinist (Jayadevan Nair), mridangist (Yanchan Rajmohan) and flautist (Hasheel Lodhia), and they sit divided, forming a neat symmetry. With the stir of the violin, the six dancers (Tanveer Alam, Nithya Garg, Kalaisan Kalaichelvan, Harikrishnan Nair, Atri Nundy and Donya Sandhu) enter quietly and stand, arm-width apart, in a gentle calm. Dark caves emerge on the screen, signalling an uncovering, and quickly the dancers’ movements coalesce into swift kicks and stretched adavus as they float between each other in shifting geometries. Their movement, of course, reflects the twists and precision of a mandala itself.
MANDALA is divided into three phases: preparation, folly and salvation. At the start, the dancers appear to be hatching, combing into space with reticent gestures and graceful bends. They wear sheer white tunics with billowing, red-trimmed bell sleeves and pleated pants which accent their leaps. Soon their footwork begins to intensify, imbued with fresh vigour. Behind them, the screens still depict growing patterns and spiralling animations and, while offering an additional layer of movement, the projections ultimately feel unnecessary. The sparseness of a black background would have better propelled the symbolic imagery with less distraction. For instance, in the absence of projections, the dancers hold mayura hasta and gather at varying levels. They sway gently from left to right, and for a moment, it’s as if watching a great bird migration.

With the flickering glare of a solar eclipse, the dancers exit the stage and the performance moves into the next phase, folly. Here, the choreography is lighthearted and playful. Alam, a trained kathak dancer, breaks from the ensemble and performs crowd-pleasing spins and tatkaar. The dancers even jest with the mridangam in a classic battle of rhythm and footwork. Rajmohan plays dynamic permutations of tala, and the dancers cheekily respond with pronounced ease. At one point, white light fills the stage and the dancers do Surya Namaskar in perfect synchronicity. When shifting from cobra to downward dog, they jolt, snapping into the iconic pose with fierce enthusiasm. This incorporation of yoga is a special nod to the Indian tradition and overlapping intersections of Buddhist and Hindu philosophy.

At the final phase, salvation, the dancers re-enter with long swords from the martial art form kalari. Within seconds, they seamlessly zigzag between each other, exchanging swords and slashing the air behind them. In a climactic frenzy, the swords are then used to form a hexagonal pattern on the ground, mimicked above via projection. The six gold pots, which remained untouched until now, are swooped up by the dancers who rush to fill them with white sand and carefully dump their contents across the floor. The puddle of white reveals a brilliant mandala. It is the same mandala constructed by the Tibetan monks as part of the original creation process.

It must be noted that the score composed by Kalaichelvan, a dancer in the production, masterfully constructs a mandala alongside the show’s choreographic reflection. Kalaichelvan uses nine complex ragas (scales) inspired by kritis (songs) by Carnatic forefather Muthuswami Dikshitar to build contrasting moods and symmetries. He juxtaposes the sweetness of Sahana with the piercing melancholy of Ahiri and bridges these realms with Kambhoji’s majesty. As the dancers shift from feelings of preparation, folly and salvation, so does the music.

In the end, the destruction of the mandala is quick. The projections show the monks dissolving their project into a pile of sand with simple brush strokes. The dancers face backward, marking surrender; having climbed through the hesitancy of phase one and dodged the folly of phase two, they are witness to the inevitability of time. They find salvation in dissolution.

Collectively, MANDALA transfers the beauty of our shared impermanence with a fine grace. Through distinct choreographic punctuation and musical composition, we are led through the transformation that arises from sacred connection. Sampradaya further lays important groundwork for meaningful cultural exchange and highlights the sense of meshing artistic process with performance. For its thirtieth anniversary, we are reminded that this legacy dance company will only continue to reimagine its horizons. 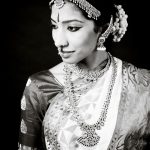