Last week, a video of Tene Ward, corps de ballet member at The National Ballet of Canada, trying on a pair of pointe shoes in the shade “Ballet Bronze” went viral.

“I don’t have to dye my shoes anymore,” Ward said in the video while trying on the Freed of London shoes that match her skin tone. The video was posted on Facebook and Twitter and has been widely shared.

“[They] are an incredible inspiration to me, and both have paved the way for Black and BIPOC dancers,” said Ward. “I was so shocked and speechless that they had shared it.”

Earlier this year, Ward said she received a message from Stephanie Hutchison, pointe shoe manager and assistant ballet mistress at The National Ballet of Canada, stating the shoes were being ordered in two new shades for her to try on.

“Even just seeing that message was an incredible feeling,” said Ward.

For the past nine years, she has used the “pancake” method to dye her pointe shoes to match her skin tone. This method requires mixing various shades of foundation-like paint to dye pink pointe shoes. The process can take several hours.

Dancers, such as Misty Copeland, have called out this demanding process, one which white ballet dancers do not have to bear. “To color our pointe shoes our skin color not only takes an enormous amount of time but is a constant reminder of the ongoing fight to prove we are good enough to belong,” she wrote beside her repost of Ward’s video on Instagram.

In June, dancer Briana Bell posted a petition on Twitter (that was created two years ago by Megan Watson) calling on Capezio to “provide skin color inclusive dance clothing.”

The CEO has since made a statement and committed to making two of their most popular pointe shoe styles in darker shades. Bloch also pledged to expand their shade range of pointe shoes in fall 2020.

Hutchison said there are other dancewear companies that offer a range of shades like Gayner Minden that began offering the shades “cappuccino” and “espresso” in 2017. However, Hutchison said ninety per cent of The National Ballet of Canada’s dancers wear Freed of London which only offers two shades that are darker than the pink shoes. “Hopefully they’ll make more shades so that it is not a choice of two,” she added.

Ward said she is thankful to the ballet that has supported her not only after receiving her new shoes but throughout her past two years at the company. She hopes that as the pandemic eases, certain classical ballet performances that still typically require pink tights and pointe shoes are reevaluated.

“There’s certain traditions like pink shoes that just don’t work for the twenty-first century anymore, given the fact that the people that are included in the ballet world now aren’t just white,” she said.

She also said that when she looks in the mirror while wearing her new shoes, she sees herself.

“Everything is me, the way I look is finally accepted,” she said. 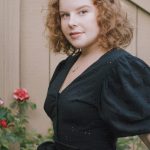 By Ashley Fraser
Read more by this author