Interdisciplinary artist Sandra Laronde is one of five winners of the 2021 Johanna Metcalf Performing Arts award announced during a private ceremony at the Art Gallery of Ontario last Thursday.

Laronde is a director, producer, choreographer and artistic director of Red Sky Performance and is from the Teme-Augama-Anishinaabe (People of the Deep Water) in Temagami in northern Ontario. Other winners of the prize include Ian Cusson, a composer; iskwē, a musician; Ravi Jain, a theatre director; and Marilo Nuñez, a theatre director and playwright. Each winner received a $25,000 cash prize.

As part of her win, Laronde chose Aria Evans, a Toronto-based interdisciplinary artist and artistic director of Political Movement, as her protege who received $10,000. Winners select a protege to celebrate early-career artists who are making significant contributions to their field and redefining the performing arts sector.

“It is my honour to be recognized with the prestigious Johanna Metcalf Performing Arts Prize. This award is an important milestone in my career as an artist as it affirms what I have achieved and accelerates what I aspire to do moving forward,” said Laronde. “It’s such an uplifting feeling to receive this award, especially after such a long pandemic winter.

“This award feels like spring has finally arrived with all of its promise and beauty. I am so fortunate to stand on the shoulders of so many remarkable people who have influenced me. I am forever grateful for this recognition.”

The Johanna Metcalf Performing Arts awards were established in 2019 to recognize the achievements of Ontario artists working and producing in the field for at least 10 years and who continue to push the boundaries within the arts. The award is named in honour of Johana Metcalf and her work for the Metcalf Foundation for 40 years in efforts to support the arts and artists across various disciplines, including dance, in Ontario.

“Being recognized as one of the Johanna Metcalf proteges is an incredible honour,” said Evans “Being named alongside artists who I look up to and admire feels quite significant and will no doubt bring visibility to the work I do.

“With this generous financial gift, I am able to have some breathing room and focus my attention and energy on elements of my practice that otherwise wouldn’t be financially feasible.” 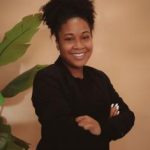